Previously on Doctor Who: Vincent and The Doctor. 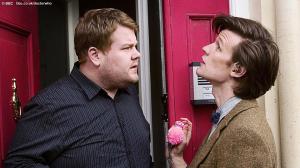 Craig and his new lodger

Yes, the football scene was slightly cringe-worthy. But it was, one, a nice reference to a fit Fifth Doctor playing cricket and, two, important for establishing the Doctor’s maddening superiority and thus setting up the tension between the Doctor and Craig. It also highlights, as favourite fellow weirdo M. pointed out, how utterly strange the Doctor can be with, as she called it, “human interaction.” The Doctor sees all the sub-textual signs of Craig and Sophie being in love with each other and even manages to drop, well, “subtle” hints (which they still don’t notice, but nevermind), and when it comes to meddling, he uses every opportunity available to make things worse — in order to make them realize what’s wrong. Well. I’m not sure whether he planned it to the point at which he had to share a psychic link with Craig and show him that absolutely awesome, adorable, incredible non-technology technological… thing-to-detect-what’s-wrong-upstairs to make him understand. 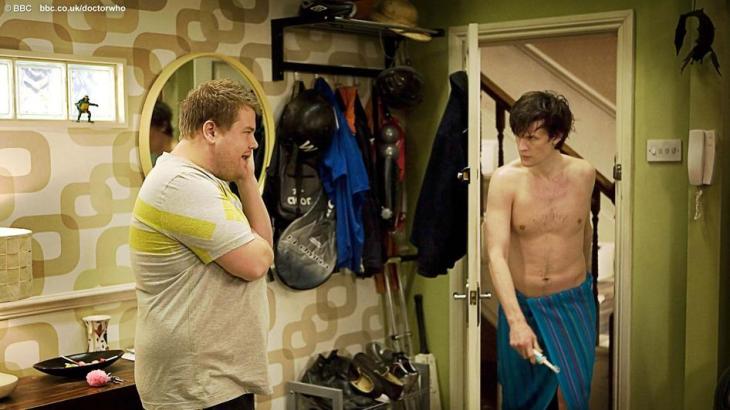 The shower/staircase scene, however, was hilarious: Matt’s hair was the star of that scene, apart from barely covered Time Lord assets (the question “anything else he’s got two of?” comes to mind). The idea of the Doctor singing in the shower, very badly, was doubly hilarious because, just that morning, we stumbled across THIS. Also hilarious was the scene in which the Doctor lets Craig into his mind — via head butt?! — and how Craig tries to keep himself from blurting all the stuff he knows now. Also, hilarious omelette! I was like, ‘oh my God, that is disgusting,’ and then it actually tasted great?! Don’t make me believe that!

That’s pretty much what I feel about this episode, which is based on a DW Magazine comic starring Ten and Mickey unwittingly sharing a flat while Rose is trapped somewhere in the TARDIS: It’s a collection of good or great moments; an episode built around that painful-to-watch couple. It’s another very character-driven story, with the Alien/Villain of the Week kind of like an accident draped around it. I mean, the ship’s crash was an accident — only the trying out humans as pilots wasn’t, not really. So, who hoped for a really evil alien plot taking our breaths away: Nope. And I think I know why. And it makes sense, dammit!

At first watching, it just flew by and took my brain with it, as a new episode of Doctor Who always does, but, after sleeping on it and watching it again, I’ve gotta say: I like randomness. I love it. One might say that this was, at times, a bit too random. Like, why did the Doctor have to invade Craig’s work life as well? It was a funny scene, and it did feel a bit like an idea squeezed in because the writers liked it, but, hey: it makes sense that the Doctor would permeate every aspect he could get a hold of, and that he’d love to stick his nose into a 9-to-5 office job which he’s literally never had before. Also, the dialogue might not be as good as a few episodes ago, but it flows very well and, once again, I could just wrap up this review by citing all my favourite quotes of the episode, which are about a hundred.

Football. That’s the one with the sticks, isn’t it?

Well. I think the aliens so far have been a bit understated/the episodes more character-driven because it’s going to be a VERY big bang at the end of this series, and we’ve got to see all the main characters at their best and worst beforehand, we’ve got to understand their dynamics, their berserk buttons, so we’ll understand their reactions in that awesome-mindboggling-turmoil-inspiring finale we’re going to see. There, that’s my theory.

Or might it be a bit of producers’ fraidy-cat syndrome? “Let’s not make the first aliens too awesome, the finale might look shabby in comparison.” Well: it’s Moffat. I’d be very surprised if he really had those issues. What would be just about as plausible is that they needed the money, so they decided not to blow their entire budget on CGI before next Saturday — all those Dalek and whatnot ships we saw in the Next Time trailer? That must have been a lot of cash right out the front door. Kidding — I don’t think it’s the money. But even if it were: I think that the character-driven thing was so well-played between Matt, Karen and Arthur that the aforementioned concept of emotional decisions and stuff will be embraced rather than laughed at.

Other than that: The Doctor really has quite a job introducing himself this season, hasn’t he? That’s something that’s really different from Nine and Ten — they never talked much about their past incarnations (about their past, yes, but never about the persons they used to be; apart from Ten telling Five that he was his favourite), and while Eleven doesn’t talk about them, he shows them around a great deal. When he introduced himself to the Atraxi in The Eleventh Hour; the library card in Vampires of Venice; the ID machine in Vincent and the Doctor; and now another sequence similar to the one in The Eleventh Hour. By introducing himself by recounting his past incarnations, he conveys a new understanding of himself, I think. There might be certain aspects “inherited” from former Doctors that shine through in his delivery and mannerisms, but, largely, Eleven doesn’t make distinctions. All Doctors, all his decisions make up the sum of his parts, and more than that. It feels like this Doctor defines himself by everyone he’s ever been, and that’s why he’s so unhinged, that’s what makes him so erratic. He said it himself: He’s getting old (5.10). He’s been having an identity crisis all this series, but in this episode, he even refers to his name by saying he doesn’t know why he chose it. Boy, he’s losing it, isn’t he?

The Doctor: “All I got to do is pass myself off as an ordinary human. Simple. What could possibly go wrong?” — Amy: “Have you seen you?” — “So you’re just gonna be snide. No helpful hints?” — “Hmm. Well, here’s one: Bow tie. Get rid.” — “Bow ties are cool!” — *slaps stethoscope plugs against her forehead*

Well, for starters, Time Lord, last time you said, “what could possibly go wrong,” you landed yourself on a space cruiser and nearly got killed by some alien life form using humans’ bodies to communicate (which is a very bad summary of Midnight, 4.10).

So, the Doctor basically did everything “a normal bloke” would enjoy. In consequence, he does something what, in my book, I count as a big shift in nu-Who character: Domestic. Lots of domestic. He cooks, he bounces on his bed, he sits down with Craig and Sophie, drinking booze (though, disgusting as Eleven ever was, he spits whatever wine it was right back into his glass; which is something that already happened to Nine), he makes breakfast for his flat mate and he takes care of him very Doctor-like. He genuinely tries to be as normal as he can, shoving his arrogant Time Lord persona to the back of his mind for an extended length of time. Except for when he just represented Craig at the business meeting; and when they were at the football game and he stole Craig’s free kick; and when he gave Craig’s friend a good talking to about ‘annihilating.’ Well. Time Lord that he is, he’s probably going to tell you he can’t help it. Oh, but, seriously? “Captain Troy Handsome”? *goes somewhere else to laugh her head off*

The Alien of the Week, by the way, was the Auto Pilot/emergency protocol hologram looking for a suitable pilot for the crashed time ship, which closely resembles a TARDIS. The trials induced a time loop which affected the real TARDIS so much that it got caught in a materialization loop and was in danger of being flung into the Time Vortex, “lost forever.” We watched the follow-up Confidential this morning, and it got me thinking. The space scientist, Maggie, who showed Karen around the observatory in Greenwich explained that a time loop was, technically, two pieces of time and space touching that should never have, a crease in the fabric. Ahem. Remind you of anything? So, the crack(s) are basically time loop(s) doing weird stuff with time? Or not? Because a loop preserves stuff, it doesn’t erase it. So maybe you don’t cease to exist, you just loop inside the crack? Perfect excuse to bring Rory back, don’tcha think? (Speaking of cracks: Mind the poll!) And what was it what Craig said somewhere at the beginning of the episode:

I heard a big bang.

Ooh, could that actually mean this time ship thing with the looping and everything could be a clue as to how that problem with the crack will turn out? Or was that just a red herring? Wouldn’t be the first… What definitely wasn’t a red herring: Amy found the engagement ring. In the Doctor’s pockets. Just as, in the now happy couple’s kitchen, a crack appeared in the wall, right next to the fridge with a Van Gogh exhibition leaflet on it (and the very true words ‘THE DOCTOR ROCKS’). And when she looked at the ring and got all alarmed, eyes wide like saucers, the crack widened and seemed to open. (I went: ‘No, Amy, the Doctor’s not gonna propose to you.’) Question: Is Amy already remembering? Did that ring ring a bell? (Sorry, couldn’t resist.) Question already answered: Yes, Vincent is going to be important in the finale: he’s going to send the Doctor a message, a warning, via one of his paintings. Oh, dear.

Random Thoughts aka quotes I haven’t managed to squeeze in yet:

Of course, the Doctor being way out of his comfort zone provides material for quite a few veiled references to his every day life:

For example, How to Thwart the Villain of the Week’s Plan: Just Get Them Talking!

The Doctor: “I’ve got one of those faces: people never stop blurting out their plans when I’m around.”

The Doctor, to Amy, on going upstairs: “Without knowing, and get myself killed? Then, you really are lost.”

The Doctor: “Six billion people… watching you two work, I’m starting to wonder where they all come from.”

The Doctor, representing Craig at the call center: “Can you hold? I have to eat a biscuit!”

Auto Pilot: “The correct pilot has now been found.” — The Doctor: “Yes, I was a bit worried you were gonna say that.”

Next episode: The Pandorica Opens.