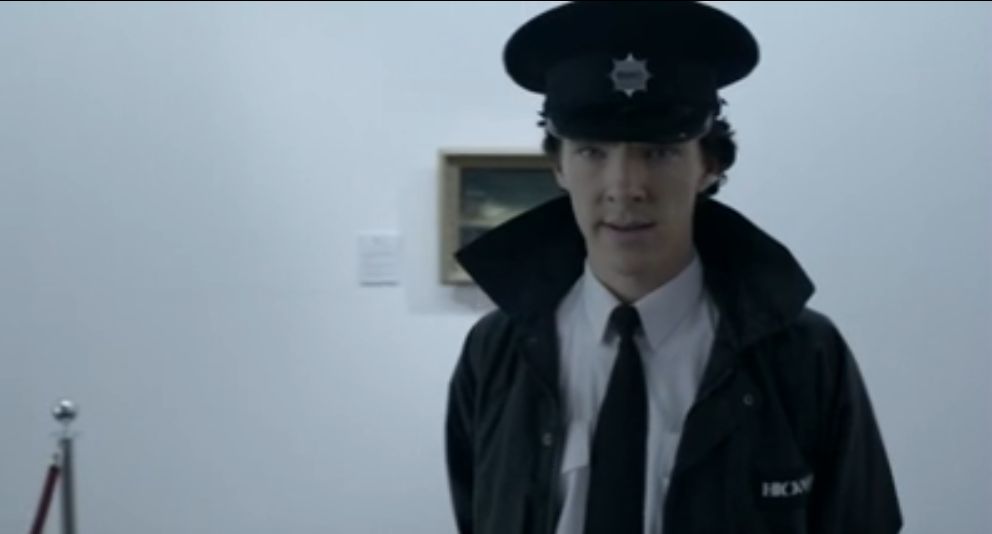 Previously on Sherlock: The Blind Banker. 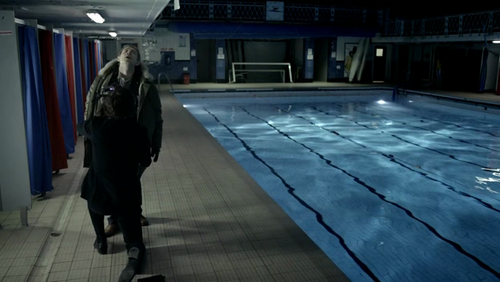 Well, here we are, then. That was… spectacular. Gripping. Fast-paced. Very, very good. And Mofftiss’ cliffhangers have only gotten worse. Curse you, Mofftiss! Don’t continue reading unless you want SPOILERS. 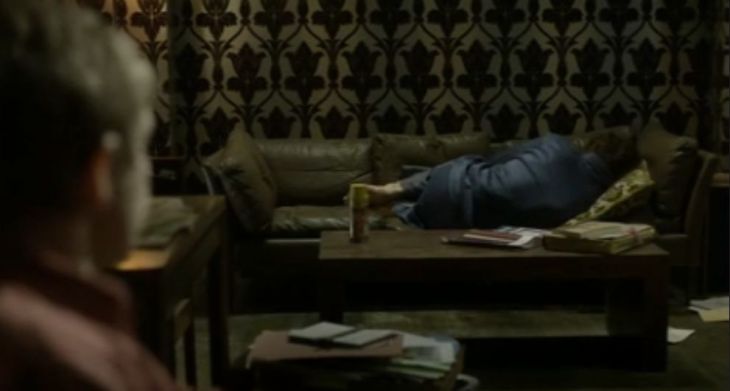 Sherlock is bored. He’s so bored he actually paints a smiley face on the wall and starts shooting patterns into it with John’s army revolver. He’s so bored, he’s probably grateful for the explosion that destroyed the house opposite 221b Baker Street and scared John across the town from Sarah’s apartment to see whether Sherlock’s alright.

This is something that runs through the episode: The two are quarreling, almost every time they’re on-screen together, and it’s as if they kept thinking that the last quarrel they had could have been the last thing they’d say to each other; as Sherlock so sensibly reminds us of when he tells Moriarty he’s been accused of being heartless not so long ago—his eyes briefly fix on John, and it really drives the point home. They still work perfectly as a team, but their relationship has shifted, there’s more conflict potential and it seems that there’s been quite a while that’s passed since we last saw them in The Blind Banker: John’s blog is, apparently, going quite well, he’s become the chronicler, the Dr. Watson who transforms their cases into stories; and Sherlock’s not pleased about his accounts of A Study in Pink. We learn they’ve already had a tiff over the solar system and other primary school stuff that the detective simply “deleted” from his “hard drive” because it wasn’t relevant to his work¹. They’re like a couple who’ve been living together for a bit and, after having lost the sparkly touch of being freshly smitten, have discovered that sometimes the walls just had it coming. 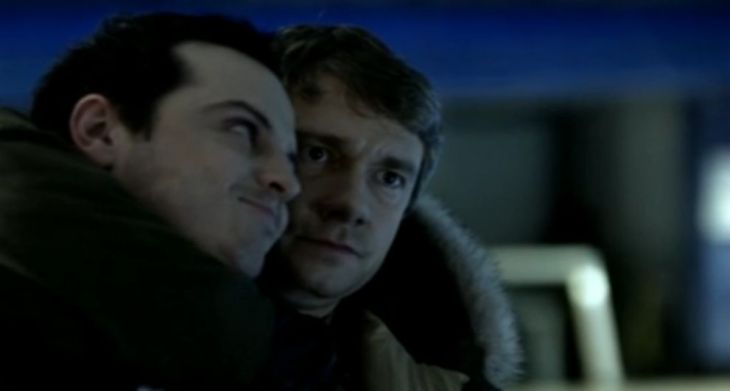 Sherlock is the focus of this story line, this development: he repeatedly tells, no: lectures John on how caring is a mistake, how giving a damn about the lives at stake is irrelevant and, therefore, unnecessary—in fact, wrong. When it comes to John, though, Sherlock doesn’t seem to listen to his own advice much; and when Moriarty threatens to burn the heart out of him—John’s the heart. Having John hurt is what Sherlock fears most, and he hasn’t realized just until now.

Sherlock’s sulking at the beginning of the episode is, of course, completely ineffective since it’s really only born from boredom: he wants to know where John’s going, and Mrs Hudson’s jab about “having a little domestic” only prompts him to walk across the coffee table to the window where he looks after his flat mate and friend as he goes to visit Sarah (what about her, anyway? I mean, John slept on the sofa ’cause he just went over to get some time alone, but he’s clearly thinking about swapping sofa for Sarah’s bed sometime soon-ish). All Sherlock wants to know during the final scenes is whether John’s alright, and he manages to thank him for nearly sacrificing his own life. They both realize they can’t lose each other, squabbling about heads in the fridge be damned, and while Sherlock’s the one who puts it into words and action more often and more persistently in this episode, John’s looks right before the end credits say it all: 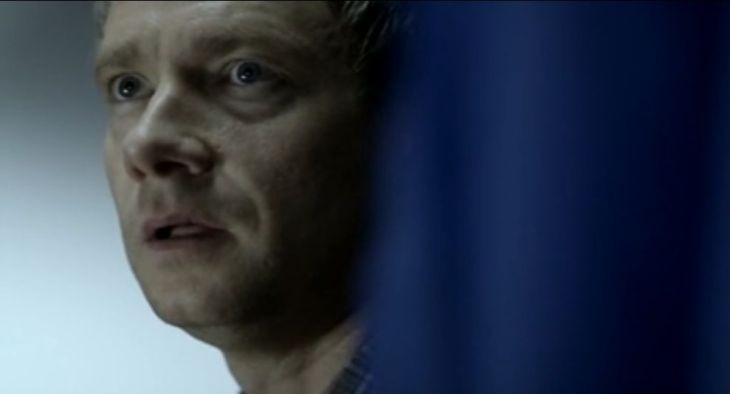 One: Whatever plan you have cooked up in there, just do it. This bit of silent communication is very subtly, but very well done by Martin Freeman and Benedict Cumberbatch. Sherlock’s final look at Watson seems akin to asking permission to go through with a crazy plan that might just save them, confirmed by the tiny nod the doctor gives. (Just this minute I’m asking myself whether Sherlock might actually have something up his sleeve, something, a trap, anything. Or maybe Lestrade might be a genius for once and come to the rescue, having checked up on Sherlock’s blog? Or did Sherlock even alert him that he’d be going? Gah…) 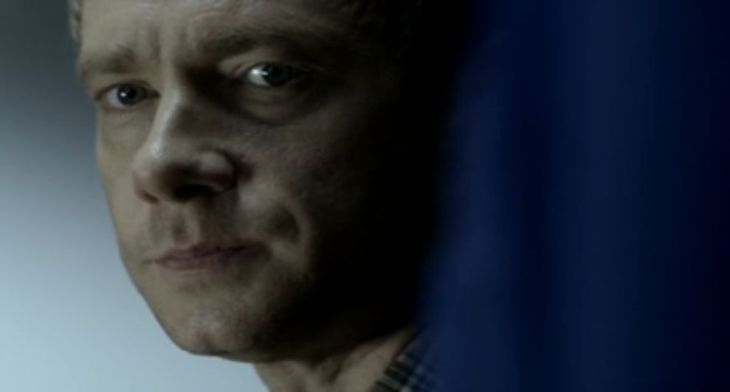 Two: This had better work, otherwise the last thing I’ll have said to you is “I’m glad no-one saw that. You, ripping my clothes off in a darkened swimming pool? People might talk.” Oh, and by the way: “People might talk”? John, have you listened to yourself after Sherlock found the supernova? Those sighs you heaved sounded positively post-orgasmic! I mean, I completely understand… *coughs*

What’s so wonderful about this episode is that every plot strand, every story could be produced on its own: any puzzle they have to solve could be a case in its own right, could fuel a full-length episode. Even the confrontation with Moriarty at the end, they could probably even draw that out for hours and not make it boring. Their silent conversation before Sherlock turned back round to face Moriarty also was a nice contrast to the staring contest they’d had before. They have a few silences, a few battles of wills between the two of them in this episode, and while it appears to threaten their relationship at least a little², it all culminates in this final scene, in this one frame, in fact: 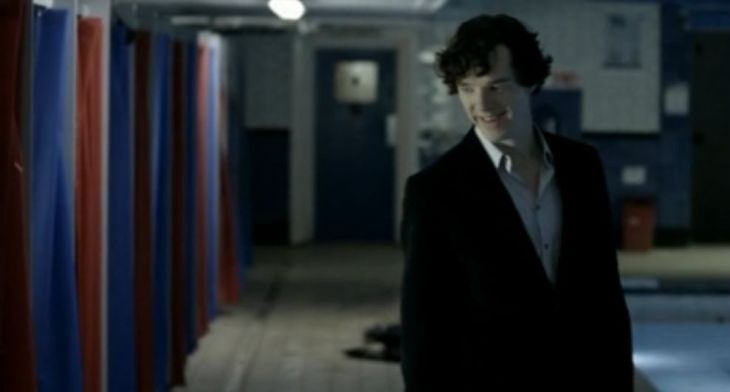 Sherlock smiles. Just like that. They’re alive and fine, and John is his stoic and dry-witted self; and people rarely do anything but talk, but they, they do things, they are adventurers. And they think it’s over when it’s really just begun.

Again, there are a few nods to the history of this character: for one thing, did you notice the rather old lab equipment Sherlock uses to analyze Mr. Monkford’s blood they’d found in the car? That etui looks just like the scuffed leather the Victorian Holmes would have at hand to keep a few of his chemicals in for easy transport. Another thing—when Sherlock rambles about the stationery being from Bohemia and the writing being that of a woman; I sat up straight on the couch I was sitting on at my friend’s house and yelled something incoherent about Irene Adler and Scandal in Bohemia. A red herring, of course, but an exceptionally artful one.

Last time, I blogged about Molly being pretty hopeless, and about whether the writers were going to have something in store for her. Well, they did, only it was just Jim using her to get to Sherlock: actually getting right next to him without the great detective knowing who he is. Or did he? So far it seemed that Moriarty’s got all the answers, but perhaps Sherlock has tricked everyone. We know he’s a brilliant actor. I mean: fake-crying all over the wife? Sherlock, behave! Anyway, I’m getting side-tracked: Molly. Another piece of proof that a bit of time has passed since we last saw her, too; since she seems to have moved on, and there wasn’t much indication last time around that she had that much determination to get over Sherlock—or, from her perspective, reason for that matter, seeing how easily he manipulated her. Jim might have to be commended on his determination, though: I can imagine that Molly would be quick to fall for anyone who treated her better than Sherlock, so it’s not quite clear how good his acting had to be and how long he had to woo her, but for everything to be arranged so perfectly it had to be a long-longterm project. John was right, Moriarty and Sherlock would be very happy together if they weren’t working for opposite sides: There’s the same dedication, the same frantic need for work. They both hate being bored: Moriarty was looking for something to distract himself as much as he wanted Sherlock distracted, running around at his whim and finally getting killed; and, goodness, while Sherlock is the quiet sociopath of the two, Moriarty really is one creepy bugger: 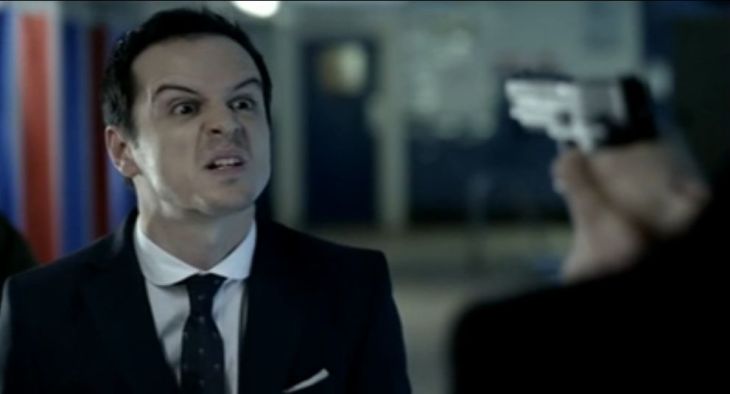 It really is sad that Molly got exactly what she thought she’d left: a very charming man who’s really only just using her to get what he wants. I’m curious about how the writers are going to deal with this conundrum and its inevitable fall-out in the next series—which, by the way, has been commissioned last week! It probably won’t air until this time next year, but at least we’re going to get more of this delicious stuff.

Things You Know Steven Moffat’s Got a Thing For Simply Because You Watch Too Much Doctor Who: 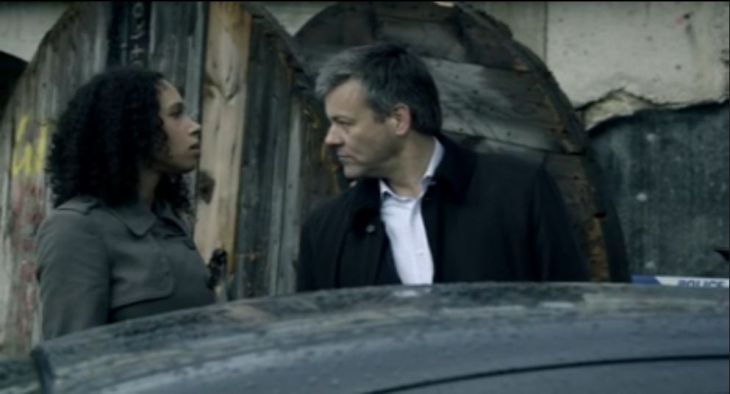 John, looking at the squabbling pair of Sherlock and Lestrade: “Alright, girls, calm down.” 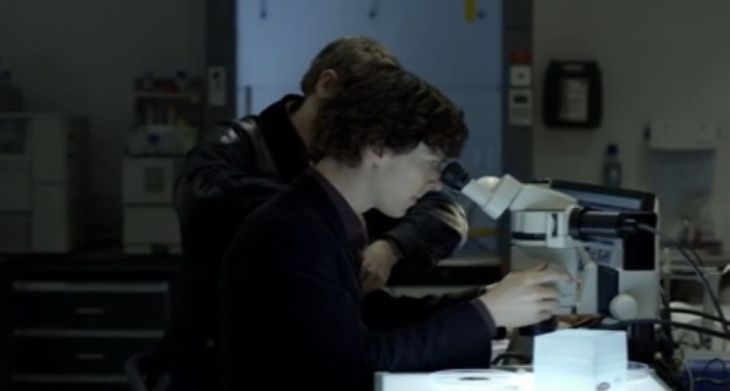 Yes, it’s in his pocket, John, and he wants you to get it!

¹ What I loved about that, though: If there are so many trivial snippets that Sherlock deleted from his hard drive, then how come he remembers “round and round the garden, like a teddy bear”? What’s important about this that he remembers it? Has it been relevent in a case once, or is he simply equipped with every proverb and nursery rhyme in the English language, just to be sure he can crack every code or cipher he might be presented with? Or is it simply a fond childhood memory? He does have a heart, you know.

² Not much, though, because Sherlock is just as loyal as John and would never, ever just let him go; and if John’s not pissed off enough to actually refuse any request or, rather, demand Sherlock has, then, well, it can’t have been so bad.

Oh, and I’m in love with Martin Freeman’s facial expressions: 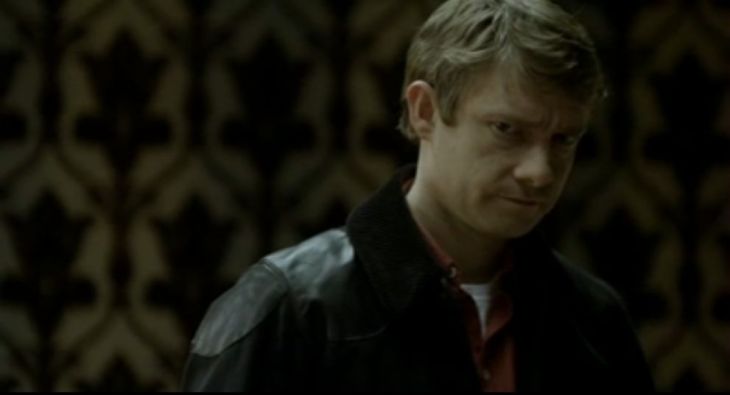 That is not Puccini. 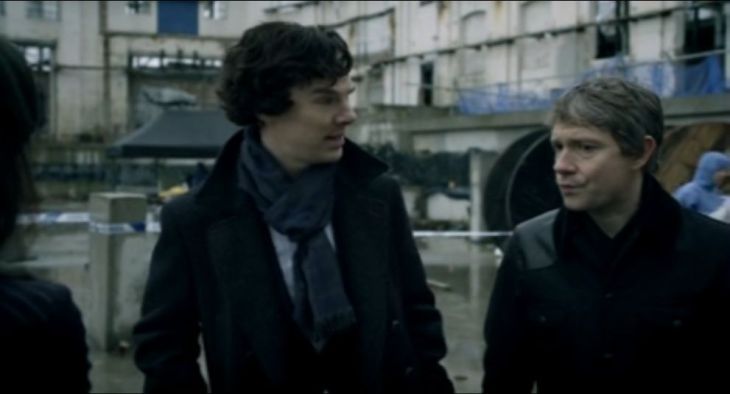 Right… I’m just going to pretend you weren’t pretending to be a kidnapped/dead guy’s best friend.

This was a brilliant finale to a great series of contemporary Sherlock Holmes, and I’d love to see it continued as soon as it can be!

Next episode: A Scandal in Belgravia.