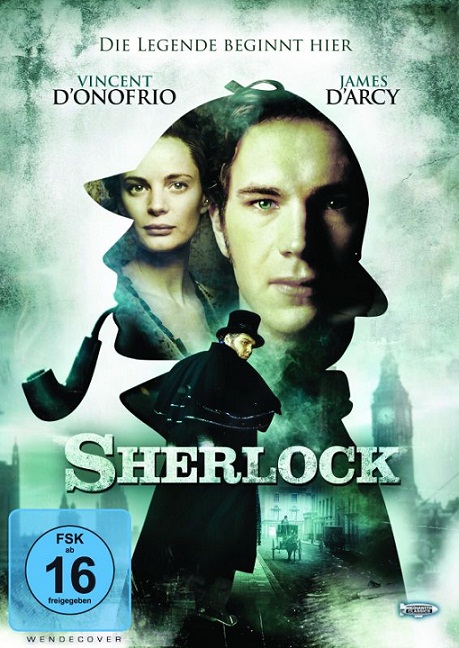 So, yes, he said ‘dangerous’, and here we are.
This is a review of the 2002 production of Sherlock with James D’Arcy and Vincent D’Onofrio; in which Sherlock’s past is illuminated, the beginning of his career as a consulting—or, as he calls himself in this film, private—detective. It’s made of spoilers, reader discretion is advised. 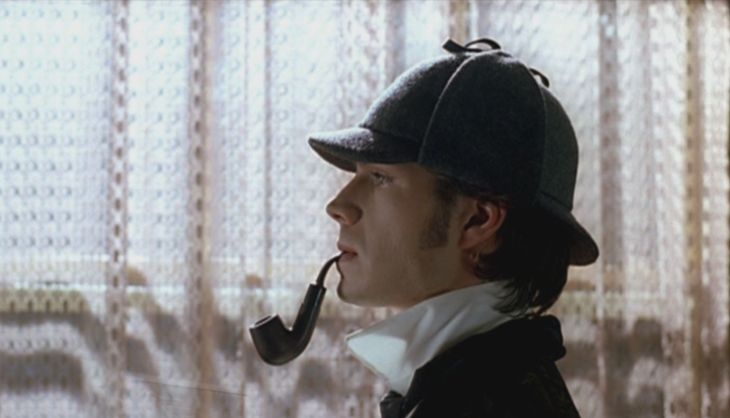 What we get is, in one word, shocking: not entirely bad, but, come on! This script simply ignored nearly all of Doyle’s creation, apart from the names, the period clothes and Sherlock’s address. Apparently, the writers wanted to put a new spin to it, but it’s more like they invented themselves a new carousel.  Basically ignoring the canon at large, there are few elements of the stories and characters that actually remain. Most of all, there is NO Mrs Hudson. How could that man survive without Mrs Hudson?! 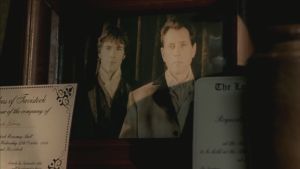 To say that James D’Arcy’s Sherlock is different from what one knows or expects could possibly be the understatement of the year. He’s a jeopardy-friendly, genuinely nice person; not nearly as arrogant and condescending as we’ve come to love him, and—what might be weirdest thing of all—he’s a womanizer, and he likes social occasions, fancy parties and making a spectacle of himself for the ladies. He seems to have casual sex regularly, which, together with his drunken escapades, gives him quite the air of debauchery. Of course, drug abuse is nothing new to us, but Holmes is set on heroin, which Moriarty has just created and plans to flood the market with, only after the Professor kidnaps him and makes him an addict; and Rebecca has to help him through his withdrawal after that. Ah, Rebecca, speaking of: Can you imagine Sherlock trying to ask a female client—who was actually an actress hired by Moriarty, put on Sherlock’s trail to draw him out into the open—out on a date, later falling in love with her, only to have her shot by Moriarty right in front of him? In short: Sherlock has a social life, healthy relationships, and a love interest. I nearly spat out my cocoa. 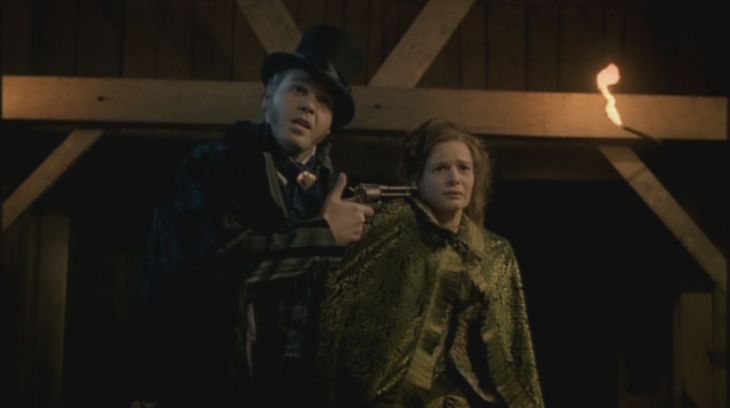 This “caring lark”, as Cumberbatch!Sherlock has taken to calling it (before discovering that Freeman!Watson was his very own emotional weakness), extends to his family—the relationship with his brother Mycroft is very affectionate; and the latter is the very reason Sherlock got into the business, instead of the sole fascination with crime, or logic and deduction: Moriarty had been supplying Mycroft with drugs, nearly killing him when Sherlock was only twelve years old—and Sherlock witnessed the whole thing, if the somewhat awkward nightmares and visions (which, from a cinematic point of view, are quite nicely done, though) Sherlock has when he’s under the influence are anything to go by. So, taking stock of what we know, it has to be pointed out that this changes the entire story. Sherlock is now a person driven by personal reasons, by emotions. Sherlock and Moriarty are old acquaintances, and Sherlock is on his heels in order to avenge his brother’s plight.
Mycroft is now an invalid. He and Sherlock still play their “old game”, their own form of Eye Spy with random people walking on the streets, with Mycroft still being a tad smarter; but he’s certainly not the British government.

But it gets worse, actually: Watson, our dear Dr. Watson, is not the man he once was. There is no mention whatsoever of him being a soldier, instead he appears to have been a police surgeon for most of his life, and he’s suddenly become something of an entrepreneur, with a taste for inventing things: A rifle cane, then a contraption that holds a corpse’s head and that has slits on the sides to aid the use of a saw to cut up the brain in slices, oh, and he got a camera to work to take a photograph of Sherlock—the iconic picture with the deerstalker and the pipe. The hat, by the way, is from his Aunt Hagatha, a get-well-soon gift after the Moriarty case is solved. 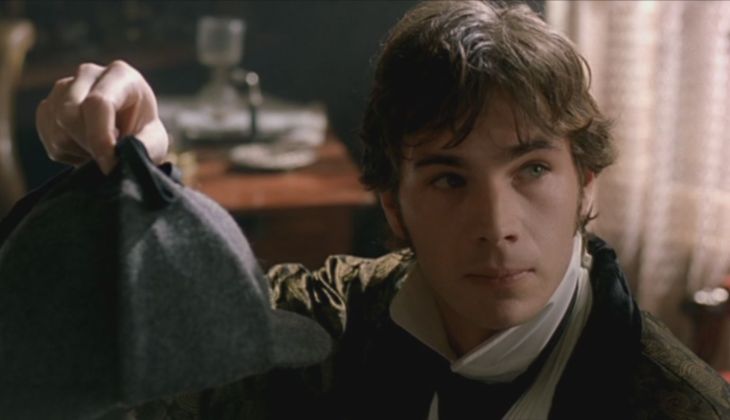 According to Sherlock, his aunt is ‘quite mad’. I’m inclined to believe him.

In other news, Watson is quite antagonistic of Holmes in the first place, which is, of course, due to the difference in his circumstances: He’s not a broken soldier, not on the search for a flat-mate, so their first meeting is a rather inconvenient one. Sherlock bursts in on the autopsy of an opium dealer, quite to the chagrin of the good doctor. But the detective manages to win his respect after helping him, and he figures Sherlock out quickly enough to pull him from a severe bout of depression and self-pity by learning about his family background and contacting Mycroft who, in one of the best moments of the film, convinces Sherlock that he’s strong and brilliant enough to get to Moriarty eventually.
Moriarty is a fiendish, cruel, and slightly camp mastermind who stops at nothing to first elude Sherlock, and then kill him. There are several deadly confrontations between them, and in the first that’s shown in the film Moriarty escapes by faking his own death and falling into the sewers. It’s always about faking one’s demise next to a patch of water with these two, isn’t it? Well, anyway, the bullet didn’t kill him, a second bullet in front of 221 Baker Street doesn’t do the trick either, so Sherlock eventually kills him in a sword fight behind the clock face of, yes, Big Ben. Just as it strikes midnight, Moriarty, for once not wearing his metal armour, the idiot, falls through the glass and down into the Thames. 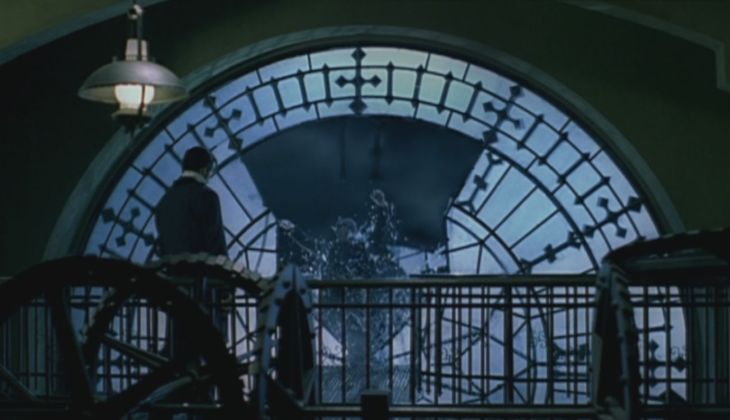 So, apart from the manifold disparities between this version and the canon, what else is there to talk of? The acting, I hear you whisper. Yes, of course! Well. D’Arcy’s a bit stiff at the waist, really, although he’s struggling to give his Sherlock depth and character, it’s not working that well. He’s too doe-eyed, friendly, and vulnerable. The relationship between him and Watson—solidly portrayed by Roger Morlidge—feels a bit lacking ‘cause they’re missing the two-men-thrown-into-a-flat-together vibe; they’re the usual quick friends, but the co-dependence doesn’t really come out; there’s not the usual friction that you get when you get a recently invalided army doctor and a sociopath into the same room and leave them to their own devices.
Speaking of dependence—Lestrade doesn’t know Sherlock and the police haven’t enjoyed the advantage of being enlightened by him yet, which is indicated by the fact that Lestrade arrests Sherlock for murder and misspells his name in the interrogation. Sherlock is only just working up his reputation, and it’s interesting how he reacts to the press writing about him: it’s as if he knows he needs them, but it’s more than that, he’s interested in what they write about him, he keeps the headlines about him in a casebook—though I suppose that’s only pertaining to his confrontations with Moriarty. 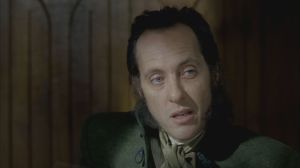 But back to the point: Mycroft it superbly played by Richard E. Grant, but he shows his talent by achieving the erratic and passionate air that is actually missing in Sherlock and that the older Holmes brother never displays in the classics.

Gabrielle Anwar makes a decent actress-turned-witness-turned-love-interest, she’s quite sweet, but the script doesn’t give her much to work with.

Vincent D’Onofrio kicks ass as Professor Moriarty with a colourful wardrobe but slightly less colourful vocabulary, I must say. But the juxtaposition of genius doesn’t work with his Moriarty and this Holmes, because here it’s sociopath vs. avenging angel. The avenging angel is going to keep solving crimes and his friend, Dr. Watson, is going to become his Boswell, but the main dynamics are severely changed.

All in all, this is all just jumbled and turned around and thrown back together. The writing’s not bad, there are a few very funny lines, there is good bits of brilliant deduction going on, and especially Sherlock and Mycroft are quite sweet together. The thing is, it’s not Sherlock Holmes. It’s a re-invention of him, but it’s not Sherlock Holmes. It seems almost pointless ‘cause they might as well have given the Baker Street boys other names, too, and made this another thing entirely. Then, one might have grinned at the references to Sherlock, instead of spending half the time wondering about what the hell’s gone wrong with this one. 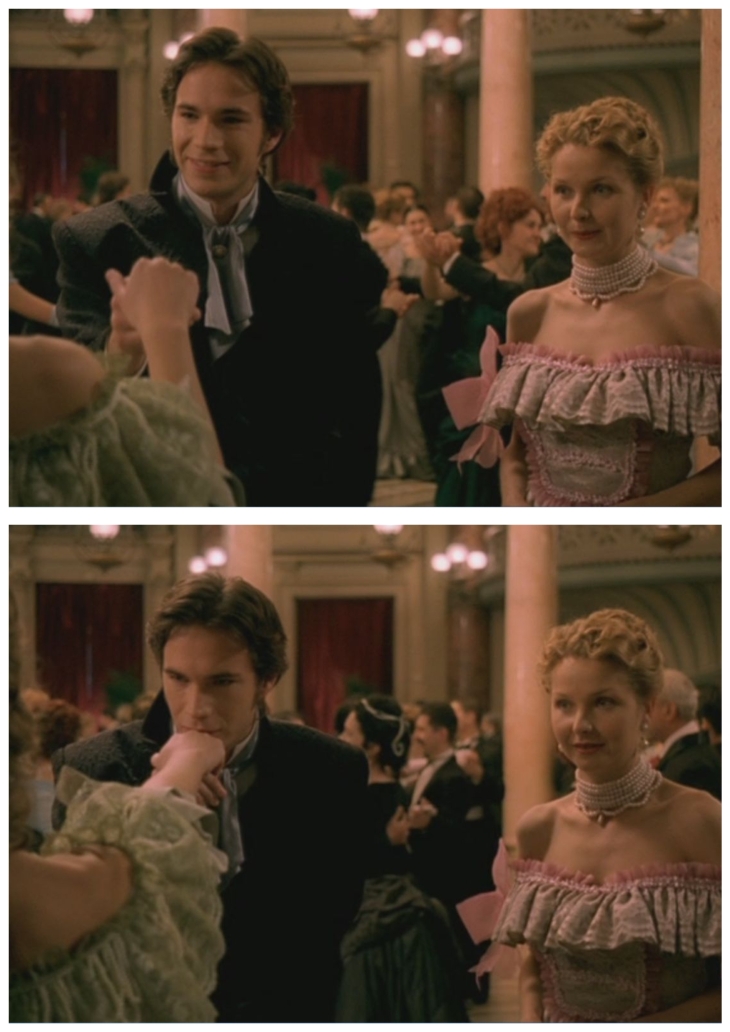