The Hound of the Baskervilles, BBC, 2002

If you’re wondering why I put these two in the reversed chronological order—you can stop now, there’s no profound reason. I guess I’m just sorting them by personal preference.

Holmes, played by Richard Roxburgh—yes, he’s blond, can we go back to the story now?—, and Watson, again played by Ian Hart, are in a bath and the doctor, hungry as ever, contemplates where to go for dinner. Seeing as this is set before the Case of the Silk Stocking, they’re still living in Baker Street together, no fiancée in sight, just good old bromance. 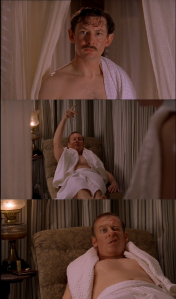 Holmes, WHAT IS YOUR FACE?

But while Watson had hoped for a nice evening out, at Marcini’s or Simpson’s perhaps, Chief Inspector Barnaby—sorry, Dr James Mortimer, played by John Nettles, has other ideas. During their meeting at a typically messy Baker Street, he tells the two men the story of the Hound and the Baskervilles, effectively boring Holmes out of his brains, who, as he later reveals to Watson, only takes the case because they’d been under surveillance this entire time, which left him suspicious enough.

If I may go meta for a second: Key phrase in this is, “as he later reveals to Watson.”

As I said, he keeps a lot from him during these two stories, and Watson’s even angrier in this one—seeing Holmes standing on that ledge, illuminated by the moon; so close yet so far, leaving Watson with the impression that all his work had gone to waste, and that his efforts in protecting Sir Henry, the Baskerville heir, weren’t trusted to their full capacity, let alone appreciated. Although he is somewhat appeased by Holmes’ explanations, he doesn’t like it, and he waits until the case is over and they’re out of danger before telling Holmes on the train home. However, Holmes, of course, knows his Watson and expected that he’d have to go out of his way to make it up to his only friend. Therefore, in the most adorable—yes, I said it—little conversation directly before the credits roll, he regards Watson fondly and tells him that he’s got a box for Les Huguenots for that evening, and that he thought that perhaps they could have dinner at Marcini’s on the way…? He is concerned about damaging Watson’s affection towards him, and between the doctor getting shot by Stapleton, the villain of the piece, and Holmes freaking out about it, willing to let the murderer escape in favour of tending to his friend, and this conversation, it’s clear that nothing could separate these two. So even though Watson, by way of accepting Holmes’ offer, retorts, “The answer to your question is, no, I don’t trust you. But Marcini’s would be nice,” everything’s alright, as Holmes assures himself with a cocked eyebrow and his jaw working under less strain than before.

And even though their relationship is in trouble, they’re always close enough to do this:

Quoting from a tumblr post I made about this a while ago:

While the detective explains to Stapleton why they must decline his murderous invitation for Christmas Dinner, he and Watson prepare for a game of billiard—for which Holmes wordlessly tosses a coin, with both of them knowing who always chooses heads or tails anyway—AND this is when Watson himself is only just cued into the plan of them “leaving.” All of this without a word, just ONE direct look at each other, perfectly playing along.

And then, they just play billiard.

If that’s not perfect sync, I don’t know what is.

I know that this adaptation polarizes the fandom somewhat—some just can’t stand Roxburgh, or Hart, or that they changed parts of the story, and whatever else. But, just as David Tennant likes Coldplay, I like this version of Holmes. It’s dark, it’s unwieldy, and just plain lovely.

That up there to the right are Sir Henry and Mary Stapleton—Mrs Mary Stapleton. While she poses as Stapleton’s sister to lure Henry into the trap, she is, in fact, his terrified and abused wife, scared into going along with his schemes, but later redeeming herself by refusing to help him any longer; an act of defiance she pays for with her life. Watson is the one to discover her body, upon which he, furious, returns to the house to give Stapleton a good beating. This leads to a lot of unnecessary commotion—Stapleton had already been cornered and cuffed by Holmes and Lestrade (a different one, the viewer doesn’t even get that much of a look at him)—and results in the doctor being shot, as mentioned above.

Yes, even dignified Victorian Holmes is just a socially awkward penguin every now and then.

Still, Watson runs after Holmes who’s chasing Stapleton, just in time to save the detective from being claimed by the moor. How he manages to wiggle out of his coat with a shot-through shoulder, I don’t know, but the wonders of putting his tailor to the test are interesting enough not to dwell on it too long.

Something I’ve been neglecting so far: the character of Sir Henry, just for the sake of being at least remotely thorough, is slightly boring and just a tad too one-dimensional, but he’s fine and amiable—incredibly naive, but what’s the poor man to do, having been bombarded with all this rot about hell-hounds, his servants helping out a convict, and Holmes coming and going as he pleases, and generally doing a lot of sneaking and snooping about.

Something that doesn’t quite come through in Everett’s Holmes—although it does become clear that he’s more lively and, well, awake when there’s a nice murder to cheer him up—is very apparent here: Although Holmes is quite angry, actually, at Watson for getting shot in front of him (he hands the doctor his glass of whisky with as much annoyance in his eyebrow), he did enjoy himself, a sentiment that his companions can’t quite bring themselves to share.

As it is, everyone’s alive, though some injured, and life at Baker Street and in Dartmoor, respectively, can go on.

Best quote of the entire movie:

I covet your skull!

Reminder: because I simply can’t squeeze all the caps I’ve edited into this post, I’ve posted a new page devoted to them, containing a gallery of extra caps.