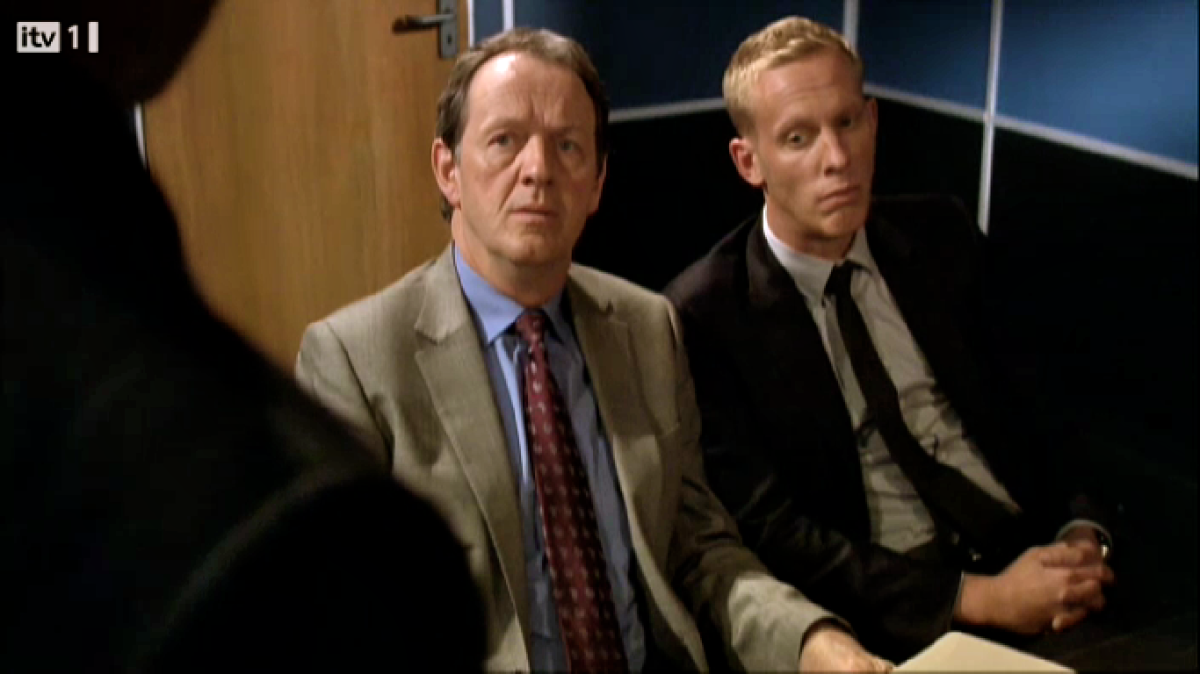 This episode forays into the wild realm of Internet dating and, coincidentally, bullying. “Leave your inhibitions at the door,” says Hathaway, and Lewis’ reaction is about as far away from his Sergeant’s resigned cynicism as it can possibly get, of course it is. Unfamiliar with the sometimes bleak realities of trolling and general nastiness on the Web, Lewis is shocked and indignant to learn that people would do this to each other. He’s seen a lot over the course of time, has seen spouses and colleagues and complete strangers destroy each other’s lives, but confronted with the ease and casual air with which it can be done on the Internet, the Inspector is downright distraught, not to mention livid. It’s what spurs him on to sink his teeth into this case, against advice from Hobson, reprimands from Innocent, and slightly worried glances (but steadfast loyalty) from James.

I’m not intimately familiar with the Shakespeare of the Week, namely Troilus and Cressida, so I’m not entirely sure how Troilus and Cressida’s story is aligned with David Connelly (Toby Stephens!) and Miranda Thornton’s (Julie Cox) frankly tragic plight of misapprehensions, but I am all the more familiar with Simon & Garfunkel. Scarborough Fair is basically their theme song, what with David coming back home after 20 years of what each of them thinks is unrequited love. Still so swept up in a hurt that he can’t forget, he attempts to build houses on Port Meadow, their favourite place when they were together, tries to bury the shreds of his heart in concrete and new facades, hoping it might relieve him of the pain.

Not only because the project is turned down, not only because they spend every moment they are in each other’s presence regarding each other with wounded eyes up until Miranda is found dead in her flat, but because he has to learn that all this could have been avoided if he’d listened to her, if he’d read her letters, if he’d opened his eyes and considered that a gossip column isn’t the place to get relationship advice from. It’s amazing how blind people can be, is probably the most important piece of wisdom this episode has to offer, the realisation that, just because you can’t see it, it doesn’t mean it’s not staring you squarely in the face.

The twist at the end, with Susanna Leland being revealed as the killer rather than Renton—who does routinely take it way too far, but who doesn’t have the guts to actually get his hands dirty himself, instead keeping quiet about Susanna, which still makes him an accomplice—was well executed and believable, what with her being delightfully shifty throughout the episode, though never quite enough to make her an immediate object of suspicion. Once again, a crime of passion, of passion unfulfilled, unrecognised, distorted beyond recognition.

Many things can be distorted this way: feelings, the truth, views and opinions. In Miranda’s case, that’s the ignorance wielded by others when it comes to her dating site video and the fact that she’d written a bestseller on why women don’t need men. Of course, now the world heaps derision and mockery upon her, for, as Sebastian (Laurence Fox’s cousin Freddie Fox—it’s in the hair and the cheekbones) puts it, “practically begging for a shag.” Since not one line from the book is quoted, I am going to assume that it was mostly about institutionalised sexism and female experience being largely ignored. But there might also have been an emotional angle, Miranda might have well written an angry, emotional book about not needing romance at all, ever. The episode doesn’t expound on it, explicitly, but by having Lewis and Hathaway pry at the secrets surrounding Miranda’s death so determinedly, it does in the subtext: women being without men does not mean arguing against relationships, does not mean arguing against wanting to have someone to share one’s life with. What it does argue against is seeking validation in men’s eyes, not in oneself; it argues against not being able to be self-confident without conforming to male experience. It does not argue against feeling lonely without a partner, it argues against judging one’s own self-worth merely by other’s definitions. It does not argue against changing one’s mind. It argues that one can be sure of oneself without a partner, but that it might be nice to have one. There’s a distinction between desiring someone and wanting to be desired, and making one’s entire life and experience dependent on it—as Susanna did, actually, enough to murder for it ruthlessly. Miranda wasn’t desperate enough to take her own life, and that’s the point. She was lonely, and she admitted to it, but putting a video on a dating site is by no means desperate nor ridiculous, and she had the strength to reject Francis Mitchell, a man who offered affection, but who she knew was doing something wrong (betraying his wife and children). Her self-respect was intact, and that’s the whole point. She wasn’t preaching one thing and doing the other—she got older and tried to put the grief she’d felt when writing that book behind her, and a book is never a manual or an order.

Now, on to our favourite detectives: oh, blimey. I could try and not spend a paragraph extolling the virtues of Lewis and Hathaway being practically married, but where would be the fun in that? Precisely.

Lewis, caught in a losing battle with the zipper: “Do me up, will you?”

James, doing up the vest and reaching into the sides to adjust it: “Comfy?”

At the beginning of the episode, they’re not taking things very seriously, are they? Honestly, wearing protective gear, for God’s sake, for the first time in six series, and Unit D is lounging about, chewing barley and smoking. The new kid on the block, DI Alan Peterson (Jason Durr), is leading a rather gigantic drugs bust, and things are heating up rather surprisingly when one of the culprits gets away, heading straight for where the Dynamic Duo is stationed on the outskirts, keeping a weather eye open on both any potential criminals doing a bunk and on the press lurking nearby. Well then, they’ve got a runner—bloody hell, are both of you completely mad? Not to mention BAMFs… Elbowing Lewis will never not be met with a sucker punch from Hathaway—and it makes me almost giddy that Laurence Fox manages to infuse even that with the dry wit and timing usually reserved for quips and snappy Shakespeare (and, of course, it’s brilliant editing, too, that shot).

A minute later, they’re on national telly: taking the suspect down, their simultaeneous head tilts, agreeing that, yes, good job, that, still lost in the awareness of only their prey and each other; until they look up. And that’s when the trouble starts.

They’re getting a fair share of attention for it, though they couldn’t care less—it’s when the press turns that things go all screwy, so much so that Laura has to put them up at her place so they can have their peace. Hathaway genuinely blames himself for Briony’s death, but his beating himself up takes a different route this time. Lewis is quick to identify the reason for his closed-off reaction at the crime scene this time, instinctively knows what’s wrong, even though he doesn’t know James had asked Briony to wiggle something out of Sebastian for them yet; and it doesn’t take awkward prying as it would have three series ago, whenever James reacted strangely at crime scenes. Unlike during previous instances like this (in The Great and the Good, for instance), James doesn’t pull away to brood, and Lewis doesn’t offer any wisdom. They both know what the other’s going to say, and it’s precisely that that keeps James from spiralling down completely. He’s upset, and will continue to be until they’ve found the killer, as evidenced by his actually manhandling Sebastian into telling them what he knows. He’s never done that before and, as always when Hathaway does something he’s never done before, it’s a two-fold thing. It’s born from his feeling guilty, feeling responsible, from not being able to protect Briony, but the fact that he snaps, that he lets himself snap, is also a mark of how he’s growing into his own. A less than socially acceptable one, surely, but still.

Laura and Robbie are having a… heated discussion on the matter of suicide or murder, and James watches—after actually offering to leave the room and Robbie motioning for him to stay put—increasingly uncomfortable: “I am here, you know?”

Lewis knows he’s being stubborn, knows that he seems obsessed, not being able to let go of Miranda’s case, and James doesn’t even have to say anything for Lewis to openly admit it. What James does keep saying, however, is things about Lewis and Laura. It’s not exactly easy to miss that DI Peterson is interested, and although James hasn’t even sniffed that out yet, he keeps pushing and prying, quietly, but obviously, obviously enough for Lewis to get a bit riled. Still, he doesn’t actually do anything, doesn’t try to show Peterson up when he gatecrashes Lewis and Laura’s lunch… date (?), doesn’t get jealous the way he did in The Mind Has Mountains. And in the end, it’s all so wonderfully ambiguous again, as Lewis ponders David and Miranda, in love with each other for 20 years and never saying a word, burying themselves in work until they become so, so alone.