When Paul Yelland, controversial professor from America, is murdered after his guest lecture on the concept of ‘dangerousness’ at the Oxford College of Criminology, the investigation branches out so quickly and comprehensively that there is a lot of effort attached to keeping all the plot strands in view—and in line. This episode’s writer, Simon Block, has done a magnificent job of that; and the director, Tim Fywell, has translated the script into a lovely vision on screen. Everyone and everything is connected this week, and Lewis and Hathaway have trouble deciding which corners to cut and where to walk the full corner. The murder could have been politically, professionally, or personally motivated; and behind every lead suspect there’s at least one person who could have done it, too. I won’t bore you with a full synopsis/character constellation, just take a look at the murder board: everyone’s on there, and everyone’s got shortcuts between them. 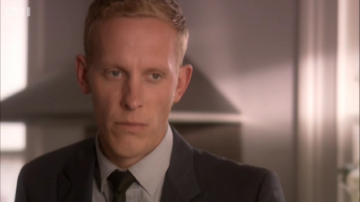 Many characters in this episode do things they’d never seen themselves doing—in other words, everyone is dangerous. Emily starts sending Nina, the second victim, vitriolic text messages, trying to scare her out of Oxford, because she wants Will all to herself; sweet, gentle Will goes berserk and threatens Robert Fraser, the professor Nina’s been having an affair with, repeatedly. Hateful things, motivated by love, unrequited. And last but not least, there’s Andrew Lipton, who lost the love of his life to Yelland 40 years ago, who believes he didn’t fight hard enough, who now made up for his “cowardice” by murder. Yelland’s biological daughter, Lilian Hunter, whom he sent back home to England because his interracial marriage might have interfered with his career in the US at the time, who didn’t know who Lipton was, will now have to carry the burden of losing another person she loved to the man who discarded her.

But in those moments when this episode isn’t being depressing, it’s being pretty damn hilarious.

I don’t think I’ve laughed this much during the entire series so far, and that is saying something, because—apart from that little glitch last week—I have enjoyed this series immensely.

We don’t see much from Innocent, but her exasperated looks are, as always, delightful, and Lewis, Hathaway, and Laura are on top form. And, by God, our two detectives truly hate “Action Man”—pardon me, DI Peterson, don’t they? Not least because he’s decidedly interested in Laura, which Lewis decidedly ignores, while James decidedly advises him not to. But, hell, Lewis isn’t listening to that part of any conversation. He will let Hathaway bully him into finally going to the dentist, however—James is going to have to sit in the waiting room, making sure Lewis is actually going, isn’t he?

Hathaway’s snark is very pronounced this week, and thank any deity who’s listening.

Hathaway: “Why, do you have a woman simmering Chez Lewis?”

H: “What’s a clue but a mistake by any other name?”

Well, aren’t you two positively adorable. And this entire scene with the two vase-flogging ladies had me in hysterics.

Hathaway is very smart in this episode—well, he’s always smart, we know that, but the concept of ‘dangerousness’ and the ethical and sociological as well as criminological deliberations behind that are clearly things that resonate with James’ own thoughts and doubts on the subject, prompting him to go on the odd little tangent here and there. He goes head to head with Anne Rand about her academic practices, Lewis lets him because he’s the expert; and enjoys a bit of philosophising with Professor Lipton—prior to his arrest, mind you. In-keeping with his track record of recent series, I nearly expected something bad to befall Hathaway, again. Since he’s always the one getting shot, drugged, poisoned, or set on fire, when he stops picking up the phone and Lewis nearly falls over himself to get to that blasted cottage, I thought we were in for another round of Call an Ambulance; but, lo and behold, he’s fine!

As fine as he can be, anyway, when the episode starts with our two favourite idiots at the pub and at home, respectively, both drinking, one swearing at the match and the other just… looking sad. James, stop that, you’re giving me heartache. And even at the end, even though he’s clearly lonely without Lewis, James declines the rather elaborate invitation for a pint and watching the match in a pub, in favour of suggesting the Inspector invite Laura instead. He’s trying to push Robbie towards a future, to get him unstuck from the past, but it’s not going very well. Although Laura has assured him that Action Man—DI Peterson (honestly, behave!)—isn’t her type and that she certainly wasn’t going to dinner with the new kid on the block, Robbie can’t bring himself to do something about it. He’s clearly a bit pleased, but he can’t. So this is what I really, really want for Series 7: a definite answer. Heaven knows I’m not the world’s foremost Robbie/Laura fanon shipper (because when I see Lewis and Hathaway, all I see is a neon sign blinking above their heads that reads, ‘MARRIED’), but Laura is amazing and lovely and witty, and I’d wish her and Lewis all the happiness in canon if they actually got their acts together. But, really, I just want them to make their minds up! This to and fro between them has been an undercurrent/story arc for the past, what, four years? Honestly, the ‘will they, won’t they?’ can get tedious, even if it’s well done.

Anyway—this has been a delightful finale to an, in my opinion, very enjoyable series. Both Colin Dexter and Kevin Whately seemed to be hinting that Series 7, if picked up, would be Lewis‘ last, so… I’m looking forward to seeing if Lewis might possibly get over the notion of concluding his life as a grieving widower; and if Lewis’ retirement or other circumstances might reveal more about what’s going on inside Hathaway’s head. It’s clear he’s been having more bouts of existential flu this series, so, surely, there’s more to be had from him. After all, he said he’d leave when Lewis does. Just, please, ITV writers: don’t kill any of them. I’m still not over Morse taking his last bow the way he did, and I don’t know what’s going to happen to Hathaway if you make him suffer like Sergeant Lewis once upon a time. Be kind. See you lot next year.

Next: Well, who the hell knows except ITV.

@KitKatKatie_xxx not the last episode. Not quite.