Before CBS’ new original series finally premiered on telly last night, there was a lot of talk, a lot of controversy, a lot of debate, and, let’s face it, a lot of butthurt. Moffat was annoyed, Benedict Cumberbatch was graceful—basically, everything as it always is. After the resounding success of the BBC’s Sherlock, of course there was going to be a lot of commentary coming from all sides. Whether the conception of this show was born out of opportunism, or by coincidence, does not take away from the fact that it deserves to be assessed on its own merits. Some of the main worries I had about certain changes the production team made to the characters are detailed here, so I won’t bore you by repeating myself more than is absolutely necessary, except to comment on those concerns now that I have seen the finished product. 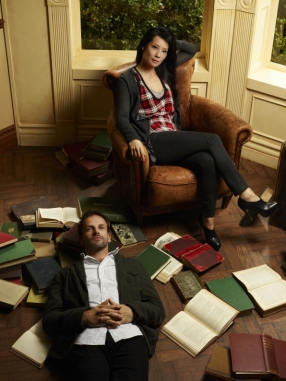 Gender trouble: before the pilot aired, the producers have repeatedly stated that they did not make Watson a woman to create an easy love interest for Holmes; in fact, they were adamant that they would never, ever take their relationship into that direction. Which, basically, was the main point of concern for me when the series was announced for the first time; and I’m glad that it’s out of the way. The rest of it, as I said, is mainly a conflict of interest between female and gender-transcendent representation. Both of those sides have valid arguments, but in light of the fact that we have a modern series that carries strongly gender-transcendent subtext, the decision to make John a Joan in New York was, for lack of a better word, the “right” one; bearing in mind that there really is no right or wrong about it—as long as Joan isn’t a bimbo or a caricature of ‘strong female character.’ I’ll still peek into the fanfiction to see how many will end up shipping them in whatever capacity; I might, too, in my spare time, though I think for the series it is important that they manage what the X-Files didn’t.

Joan Watson is, in one word, brilliant. She acts both as a buffer between Holmes and the outside world, and she calls him out on his shit. She is just, or at least almost, as observant as he is, if not yet as practised at deduction; and she instinctively enjoys working with him as a consultant to Captain Gregson (hello, dear!). The way she throws Holmes’ anger right back into his face is exactly what that bloody genius needs to keep him grounded.

Joan: “I notice you don’t have any mirrors around here.”
Holmes: “What’s that supposed to mean?”
Joan: “I think it means you know a lost cause when you see one.”

Ooh, ouch. Watson is also the one who notices the rice; or, rather, its significance; which Holmes takes great care to emphasise.

Now, there is the question of in how far Elementary is a “proper” adaptation of the original stories. I don’t think there’s any need to argue about that, we’ve already been through it with people arguing that Robert Downey, Jr.’s Sherlock Holmes is nothing more than an action hero, etc. Thing is, in the end it comes down to personal preference, and since I enjoy the Guy Ritchie movies immensely, I don’t really give a hoot. In terms of genre conventions, it boils down to a similar argument as with the gender trouble.

That said, since there are a few things that have been changed about Holmes and Watson, I’d like to offer a compromise, which works well for me in these things: in my mind, Elementary is categorised more as an homage than an adaptation—a clever one at that. I really, really liked the bees on the roof, Sherlock writing his book on bee-keeping in his head, just started chapter 19, as well as the reappearance of DI Gregson (Aidan Quinn). There are many nods to canon right there, although the cases themselves don’t appear to be based on Conan Doyle’s stories—if I remember correctly, he doesn’t turn up in the credits, either.

It is, in my opinion, a good homage, but that’s it. As I have stated in my post earlier this year, there have been so many changes made to the characters’ backgrounds that there remains little to be recognised; which is great in terms of further character development, but not really when you rely on your own knowledge of the original series to carry you through and reacquaint you with the characters at once, which sometimes begs the question why they didn’t change their names and made it a completely new series. My main issues are:

Apart from that: Sherlock, seriously? He’s an excited little puppy! Not that there’s anything wrong with that, he’s just… he’s too nice. It’s common knowledge that Holmes always takes an immediate liking to Watson, to an extent, but for Holmes to go easy on her and pretend that he doesn’t already know that she lost her license… really? And for him to admit that he was being nice… and he actually disables her alarm clocks to make sure she sleeps! He is generally not as cold as canonical Holmes, though detached and generally a bastard; and, damn, he’s sassy, I like it. He’s petulant when he wants to, a veritable oncoming sulk if need be. (And, yes, he googles, so what.) Joan can read him remarkably well even after just a few days, and so she deduces that his unemotional attitude stems not so much from a borderline-sociopath personality or Asperger’s, but from a facade he’s put up after getting terribly hurt back in England—by a woman. Honestly, you should have seen my face when Joan finds out he’s been having sex, and engaging in some pretty kinky stuff just before she arrived. Just to satisfy the biological urges, mind, which runs contrary to Holmes’ usual stance: everything is just transport, and the like. Holmes actually takes care of his body’s baser instincts, so they don’t impede his work, instead of completely repressing or simply not feeling them. However, Joan’s deduction before she bails him out of jail—some things never change—reveals that this Sherlock Holmes has a heart, and it’s been broken. Oh, dear.

Now, this show may not be as witty and perhaps not as obsessively fannish as Sherlock is, but it’s entertaining, well-written, the dialogue is snappy and quick. The photography can’t hold up to what we’ve seen from Euros Lyn and Paul McGuigan on Sherlock, but we must bear in mind that those are 90-minute episodes that have the ambition of being more cinema than telly, and that the pilot episode (of Sherlock) we first saw wasn’t the actual first draft; and I like Elementary’s set-up in terms of direction. Similar techniques are employed during Holmes’ explanations, giving flashbacks to the crucial observations of the investigation; though Miller varies Holmes’ speed of delivery from time to time, which at least this time seemed slightly inconsistent, but I expect that’ll even out as the series goes on. What I really like is the acting: Jonny Lee Miller and Lucy Liu have great chemistry and spark off each other very well on-screen, I look forward to seeing their characters get to know each other. I can easily see them becoming best friends; they already know their way around each other after just a few days, and them going to dinner together after watching—well, predicting—the Mets game is a good start.

Next: While You Were Sleeping.