That’s that, then, hm? We’ll never get to meet Irene—because she’s dead.

Since I’m rather behind on the schedule for viewing it on German telly, I couldn’t help but glimpse a few spoilers on tumblr, concerning Irene and her demise. As far as I know, she was killed by Moriarty, which, sadly, makes this a conversation between men. She’s the love interest that died, and that’s it; she’s the foil in what is to become Sherlock Holmes’ greatest case. To make the one woman who could get one over on him—well, next to Joan now—a stepping stone in his recovery and career… All we know about her is that she must have been amazing because Sherlock thought so and was very much in love with her—in which case her characterisation and value hinges on Sherlock’s judgement alone. That in itself isn’t too problematic, since, well, Sherlock is extraordinary, and all of these other characters wouldn’t be here if he didn’t think they were worth keeping around. So far, so good. But all the other characters—especially Joan and, since this episode, Captain Gregson—have something else going for them, something aside from their relationship with Sherlock that defines them. That is what makes round characters. At this point in the narrative, Irene is as flat as a pancake. Sure, her death will drive Sherlock to new heights—but that doesn’t give her agency. At all. 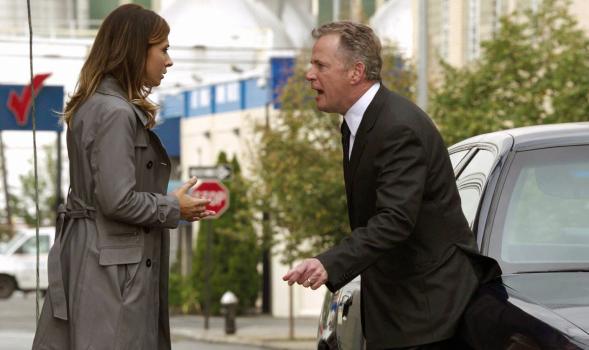 So, what is going to happen with Detective D’Amico? Is it going to be brought to light that she planted the evidence that convicted Crewes in the first place? Gregson doesn’t have to come forward anymore now, since Crewes really did commit the murders 13 years ago, but that’s a rather easy way out, isn’t it? Sure, it would destabilise the entire case, especially with Crewes’ son in the picture, but… it undermines the way the writers built Gregson up as an honourable cop just ten minutes earlier. Not that I want to see his career in jeopardy, far from it. Just… not that honourable, then—but completely human.

And again, it’s a kid that turns to murder—never trust the damn kids.

The set-up for the case was good; though the trope of Old Case Comes Back to Haunt the Detective is a well-worn one, this was written entertainingly enough, with doubts and a wolf in sheepskin. Why the shoes, though? Did I miss what that was about?

What Joan realises in this episode is that Sherlock isn’t entirely closed off—there just aren’t a lot of people in the world he lets close. All the therapists at the rehab clinic he spent six months at describe him as childish and uncooperative—never questioning whether, maybe, their method of trying to get through to him just wasn’t the right one. Joan already knows more about Sherlock than they do, so she’s definitely on the right track. She just needs Sherlock to start trusting her the way he needs to. Work-wise, he already does, even though he doesn’t want to admit that, either. And at the end, when he tells her that Irene is dead and (I guess) that that was what make him seek refuge in heroine, he does open up just that bit. It’s understandable that he doesn’t want to talk about it, but he knows perfectly well that she is doing all she can to help, because that is her job (and because she cares, but she can’t give that as a reason yet; not when it’s easier to rub Sherlock’s nose in it by reminding him that it’s her right to dig into his private life and part), and because she pursues what she thinks is right with the same tenacity that he does. It’s no obstacle they can’t overcome.

Their sass-off at the coffee machine at the precinct, though? P e r f e c t.

Next: The Long Fuse.