Previously on Elementary: One Way to Get Off.

The brilliant Lisa Edelstein is this episode’s guest star and killer; embroiled in a case that is basically one big spiral winding in on itself, with red herrings populating a relatively small pond. There’s an office building, there’s a firm. There’s an employee, there’s an employer with an interesting past; and along those four corners that, as the case continues, move closer together, the spiral narrows until it arrives at the only point that’s left: Heather.

After environmental activists, disappearances, and sex tapes, what’s left is that Sherlock and Joan’s companionship is supposed to come to an end; and Sherlock is being recalcitrant. Surprise! But why?

That look he gives her before stepping out to help Alfredo with his assignment? May I introduce: Sherlock “Kicked Little Puppy” Holmes. He doesn’t want her to leave, and he can’t say it. It’s her decision, in the end, and he is making no move to take it from her. He knows that she’d probably stay if he earnestly asked her to, but he wants her to want to stay, for her own sake. He wants her to be a partner, a companion. But she still sees him firmly as a client—or at least that’s what she projects—so he can’t, because he won’t. 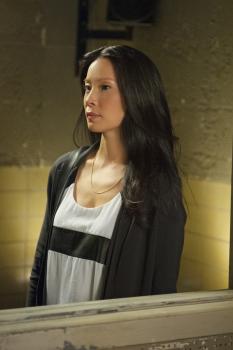 That’s when he’s not busy informing a potential suspect about his hypothetical willingness to sleep with her after she may have just flirted with him over crosswords. (Yeah, that sentence doesn’t get any less strange the longer you stare at it.)

Each episode, Joan and Sherlock have scenes that highlight the ease with which they navigate each other even while butting heads the rest of the time; they’re almost a little isolated. It happens when they’re deep into the investigation, and both are focused on nothing but the work. In this case, it’s the tennis balls filled with explosive chemicals; and the way Joan comfortably bats Sherlock’s arm away when he accosts her with the foul smell of nitrate. Although they generally keep out of each other’s space, that was one of the first occasions of physical contact that stood out to me. As their collection of Growing Closer Moments gathers more material, I’ll be keeping an eye on that.

Next episode: You Do It to Yourself.