Previously on Elementary: The Leviathan. 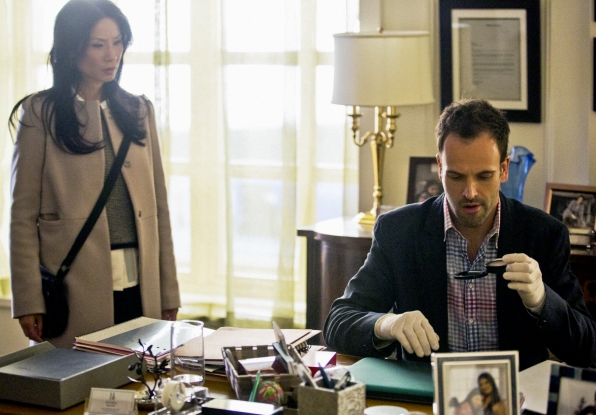 That’s about it on the case front, actually. The real action’s happening somewhere else.

It’s happening in Joan’s head. She’s accepted a new client for the time after her job with Sherlock is done, and she’s absolutely serious; she’s not considering really chucking therapy yet. Sherlock all the while enjoys goading her with ridiculous assumptions concerning the excuses she’ll make to be able to stay—he even offers her a position as his “apprentice,” with instruction in detection in exchange for a bit of light housework. Which he knows she won’t accept; that’s the whole point. There’s the question of whether she would lie to Sherlock’s father about his son’s condition—but, really, even if Sherlock’s over the drugs and isn’t in danger of relapsing come what may: he still needs her. He’s not alright yet, and even though he might not need a live-in companion anymore, he would still need to go to meetings; and the simple truth of it is that I don’t think Joan will trust anyone else with him. Not only because he’s a handful and absolutely impossible and a nerve-wracking pain in the arse, but because she doesn’t want to see him get screwed over by anyone. So, should she advise Sherlock’s father to keep her on, it wouldn’t be entirely untrue.

Joan’s moment of realisation that she does enjoy being a consulting detective too much to give up on it has yet to arrive, but one thing is clear: it’ll be her decision alone. As much as Sherlock is needling her about it, his pretending to assume has the sole objective of finding out her intentions. He knows that he can’t force her hand—and he won’t. He’s making these ridiculous offers because he will not resort to blackmailing her emotionally, he will not pretend that he’s on a downward spiral to get her to stay, no matter how much he wants to; and no matter how many elaborate plans and ruses he could come up with. One, he knows she’d see straight through him; two, because he wants it to be what she wants and needs. If she decides to damn it all to hell and stay, he’ll know it’s because she really, really wants to, because she wants to work with him; not out of a sense of obligation or fearing for his health. Concern for him as an ex-addict plays into it, of course it does, but that also comes with being a colleague, a friend, a flatmate, not just with being a doctor. Her priorities will shift, if they haven’t already.

Sherlock’s proud to have her at his side at work—and he likes making her spaghetti in a mug. That’s something, right?

Oh, and I’m enjoying these stills that CBS put on their website…