Previously on Doctor Who: The Bells of Saint John.

The TARDIS doesn’t like Clara? Perhaps because she’s impossible: if you think about it, Clara’s got something of almost every companion of New Who. She just won’t die, like Rory & Captain Jack Harkness, her and the Doctor’s time lines are crossing over in weird ways, much like his and River’s, she’s got an inquisitiveness and adventurous spirit about her that reminds me of Astrid Peth. If there are really years of her life missing, then she’s already met the Doctor but can’t remember him: Donna. She leaves messages for him that send him on a scavenger hunt, much like Rose scattered the Bad Wolf in time and space as a warning. She’s a caretaker, much like Rory but specifically like Martha. It doesn’t fit 100%, but if two times is a coincidence, three’s a pattern, then what’s seven (at least)? The Doctor tells her that he reminds her of someone, and except for the bit about “someone who died,” that’s delightfully ambiguous in this context.

And, oh, there’s another thing:

“If you want me to travel with you, that’s fine. But as me. Not as a bargain basement for someone else, I’m not going to compete with a ghost.”

Clara definitely got that from Martha, reminding us of how she called Ten out on never really seeing her worth because he was so hung-up over Rose. This is it, dear audience. Doctor Who is about change, about the new, about all the things that could be, because there’s infinitely more to see about the future than there is about repeating the past over and over. Doctor Who is not going to compete with its own ghost. And you know what? Clara is good. (See what I did there?) She sacrificed Page One, and the lost possibilities of her mother’s life that never got lived.

I was mildly bored by this episode and mildly surprised by the somewhat less-sleek-than-we’re-used-to special effects, until the Doctor actually, seriously started giving his memories away; although I wasn’t whooping with joy at Neil Cross turning the ship away from the iceberg, but rather asking myself: what. the. hell?

Right up until Matt Smith opened the door on all of the Doctor’s grief and misery and made me cry, with his words and his tears and his anguish and his brilliant, brilliant acting.

“I walked away from the Last Great Time War. I marked the passing of the Time Lords. I saw the birth of the universe and I watched as time ran out, moment by moment, until nothing remained. No time. No space. Just me. I’ve walked in universes where the laws of physics were devised by the mind of a madman. I’ve watched universes freeze and creations burn. I’ve seen things you wouldn’t believe. I’ve lost things you’ll never understand. And I know things. Secrets that must never be told. Knowledge that must never be spoken. Knowledge that will make parasite gods blaze. So come on then! Take it! Take it all, baby! Have it! You have it all!”

The Doctor so desperately wants to be forgiven, but most of all he wants to forget; and this is his chance. And, oh, good God. What if this is how he forgets his name? What if this knowledge that must never be spoken, the answer to the question on the Fields of Trenzalore, is what he just forgot? What if, in the one place that the Doctor cannot lie, he won’t have to, because he won’t remember? What if we will never know his name, because he himself won’t know; because only River will? 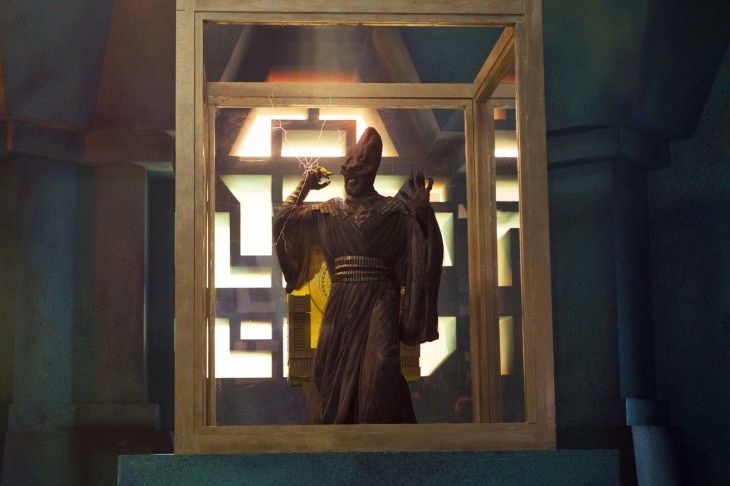 You see, this episode wasn’t great. It had its moment, and as such was still better than The Curse of the Black Spot, for instance, but… all that singing? Really? No, hang on, that’s not quite fair, I’m just not very fond of musicals, that’s just me. Though I love the Ood singing, for example, so I’m not quite sure why this needled me. I love Neil Cross’ work, but still, this honestly wasn’t a highlight.

So, let us consider: last ep’s plot was very The Idiot’s Lantern. (By which I mean: it was The Idiot’s Lantern.) This week’s is very The Beast Below combined with bits of The Fires of Pompeji (spliced with Star Wars cantina and Fifth Element opera), and doesn’t this shot look awfully familiar: 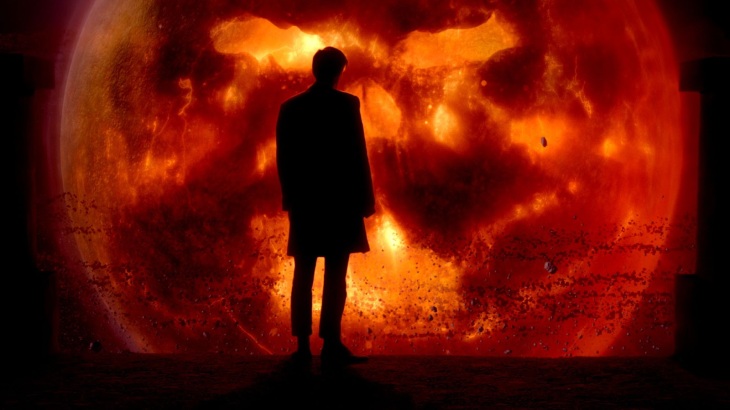 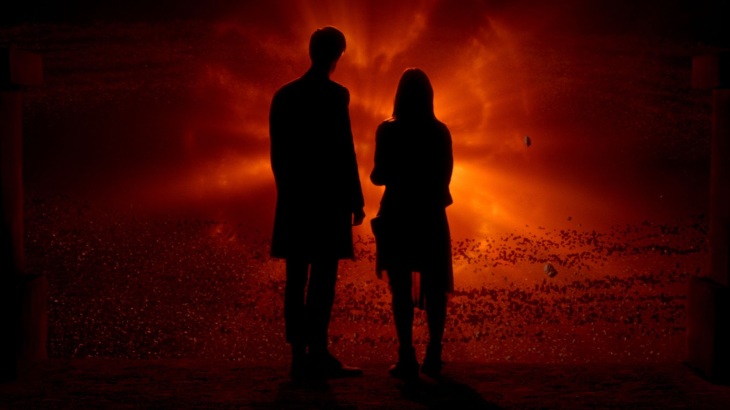 It’s The End of the World, when Nine and Rose were watching the sun expand. The confrontation scene itself is also terribly reminiscent of the Tenth Doctor having a chat with the Devil in The Impossible Planet/Satan’s Pit. It’s almost as if the writers were trying to show the audience that what a big part of them seem to want—a companion revue/best of—really, really isn’t what they want; because it would bore them out of their skulls. Except, you know, why would a show’s writers show their audience something horrible in the first place, on purpose? So I don’t think that that is what they’re trying to say at all, but it’s what one might take away from these first two weeks of Series 7 Part 2. The Doctor says to Clara, “I forgot how much I like it here, we should come here more often.” The last time he visited was with Susan, his granddaughter, so really a long, long while ago. And that’s the point: constantly going back to things that are still fairly recent takes the fun out of it. Let’s celebrate the past of New Who when it’s actually the past. (Oh, and the market was also very Turn Left!) The awkwardness of this ep works very well, though, to prepare the field for next week’s Cold War, which, according to several non-spoilery sources, is going to blow us all out of the water (pardon the pun). I’m looking forward to it, now more than ever.

To everyone complaining about the Doctor meeting Clara as a kid, though: he’s trying to figure out who she really is, it’s more scientific observation than a spleen or a stupid spiel. He learnt with River that looking at how the child… began is a good way of getting your facts straight, so he’s doing the same with Clara. She’s not Reinette, she’s not Amy. And might I remind anyone blaming Moffat that a) this episode was written by Neil Cross, and that b) RTD had Nine go back in time when Rose wasn’t looking to give her twelve-year-old self a red bike?