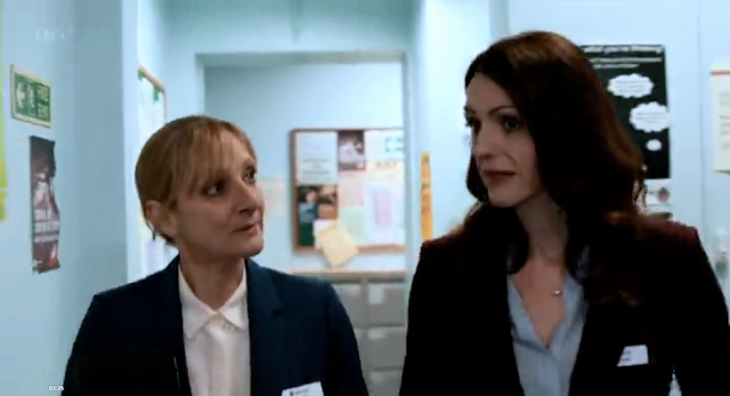 So, what’ve we got: Gill’s son, Sam, is getting married, and Scary Mary is less than delicate about her suspicions as to why… Shagging that bloke has come back to bite Rachel in the arse; and Janet is frustrated with her new duties as acting Detective Sergeant. All in a day’s work, then.

It’s three months since the wedding, Sean’s snoring, and Rachel’s fed-up with all of it. She seems to be doing a little better than last week—no lingering resentment against the system or anything—but she hates being married no less. As the case is back to being the narrative focus of the episode, the officers’ personal lives take a little step back again.

Daniel is a well illustrated chip off the old Bad Seed block—not the full-blown creepy Gothic fiction way, but creepy enough. Assaulting his mother, he is going to go to prison for, and huzzah to that. Philip Larkin may have had a point when he wrote, “They fuck you up, your mum and dad,” but Daniel is fully responsible for his own actions, i.e. being a jerk.

Who else is fully responsible for their actions, despite being inebriated at the time? Pete. Being drunk is an explanation, but not an excuse; and, really, Pete, the “she was all over me” defence? Really? I can see easily enough that he’s ashamed and heartbroken, and Janet’s right, he’ll never to it again, but… Pete, can we not? And being an ass like that to Rachel, what for; Pete, that’s silly.

That doesn’t mean that Sharon wasn’t completely out of line, shagging her daughter’s colleague at precisely that daughter’s wedding, though. In the car park. There aren’t many more totally inappropriate things left that she could have done that night.

Overall, this episode had less meat to it than the previous two, which, perhaps, is a relief; giving us a bit of a breather and things to think about quietly. For instance, was it a good idea for Janet to ask/insist/demand that Ade move out swiftly and without delay? (Who’s Elena, exactly, anyway?) And what are we to make of Sean’s face as he decides not to call Rachel’s one-night-stand back after all? There was something in his expression, something resembling recognition that made him change his mind, but he didn’t seem hurt; or is that just my body language radar beeping out of tune? I don’t think he’s figured it out, but then what on earth is he thinking?

The case moves, again and as per usual, really, at a great pace, and is wonderfully tightly scripted. Identifying the Ibbitson by his fingerprints was a lucky hit that just comes with having to move the script along, but the way his case and statement are handled stands out with regards to him pretending to be gay. For one thing, no-one cracks a joke about anything concerning Canal Street or Eddie’s coming out to Sarah years ago. Two, once you know what to look for, it’s possible to identify little things in his first statement that Andy may have included as part of a “gay performance:” the hand on heart, the slightly elevated voice register here and there, but on the whole, his behaviour before and after admitting that he didn’t have and wasn’t interested in sex with Eddie didn’t vary. He acted like any bloke off the street, full stop; and the writers blessedly didn’t make Kevin wisecrack about Andy not acting “gay enough” or whatever. He’s a suspect because he has priors and, at that point, is the only lead and his story doesn’t quite match up with the evidence; but his sexuality only became a source for puzzlement when his girlfriend cropped up. And even then it wasn’t excluded that he could be bi, the doubts only arose because parking a one-night-stand’s Aston Martin in front of the house one occupies with one’s significant other is just slightly unorthodox. All in all: well done, show.