Previously on Elementary: A Giant Gun, Filled with Drugs. 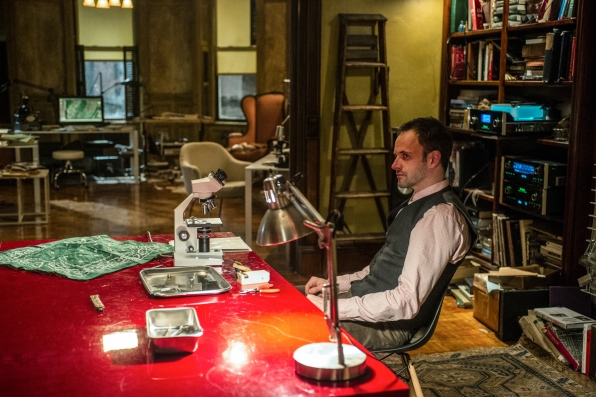 Thing what we learnt today: you gotta look out for family. 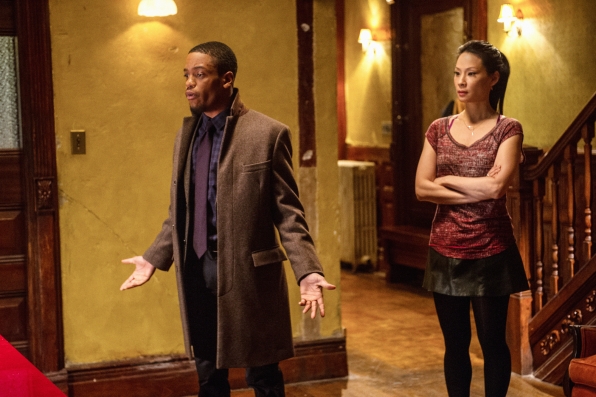 Detective Bell’s in trouble, and while Sherlock rattles off a list of reasons why it would be entirely inconvenient for him if Bell were to be suspended and/or convicted of murder, Joan puts it simply and just says what they’re both thinking: he’s family, and you do everything in your power not to let family go down for a murder they didn’t commit. So, if that means drowning in files, then that is what it takes.

It’s great seeing more of Detective Bell, both his life and his enormous skill as a detective. Sherlock does not dispense praise lightly, and he’s seriously and genuinely impressed. It’s not just that Bell has proven reliable as an occasional informant; the point is that after skepticism on either side, Sherlock has come to value Bell’s work immensely, and Bell, as much as he grouses sometimes, knows it’s a good thing to have Sherlock along for the ride. The three of them, Sherlock, Joan, and Bell are on their way to becoming a steady team, and I like that a lot. Since this is the first episode in which Jon Michael Hill was being given a lot more to do, we got a proper look at the nuances in his acting, and they’re fantastic. That spark of sass in his, “Thank you,” as Sherlock tells him that he’s not an idiot slays me, because he so brilliantly lampshades the Crowning Moment of Heartwarming by going dreamy-eyed for a split-second, while poking fun at Sherlock at the same time. The same, though at the opposite end of the spectrum, when Andre was shot. His shock, fear, helplessness, come out in a mixture that’s balanced just right. In television in this format, supporting actors in a bullpen don’t get a lot of room to shine, and Hill has made this episode his.

The case itself was good, though bits of the thread dangled a bit—suspecting Andre of setting up his brother added to the drama, but since Gregson mentioned, after the Bradshaw shooting, that the bullets were a double hit, centre mass, the avenue of the killer indeed being a cop was left unexplored. Sherlock should have considered that sooner, especially with the implication that Bell’s former superior was cuffed by IA after someone called in a tip. That usually sets of fields of tension within the precinct, so other cops should have been on Sherlock’s radar sooner.

The other best thing of this episode: the confrontation. And it was so, so, so well done.

Sherlock knows that Joan lied to him, but it’s not lying to him that made him broach the subject now, it’s the fact that Joan’s been lying to herself, and he can’t let that go on. Initially, he thought that she was indeed staying for him and, thus, tried to signal that he was fine, over and over again. When Joan still made no move to leave and when he then found out that she wasn’t being paid anymore, he concluded that, just perhaps, she needs this as much as he does. Joan’s psychiatrist asks why he hasn’t told her to move on yet—but he has. Except he hasn’t done it in as many words, because he knows Joan would take that as his desire to get rid of her and leave, despite not wanting to.

And even though he’s figured it out, he won’t use it against her. Being caught out, having him know that she likes what he does too much to give it up doesn’t mean that she has to stay. He tells her to think it over, tells her to discuss it with others—his opinion is not the one that matters; and that’s brilliant politics. How often does a man on television tell a woman, ‘This is what I think would be best, and it’s what I would love to happen, but that doesn’t mean that it’s what you should do; only you know what you should do’? A lot of the time, people don’t like it when their other half (Captain Gregson’s words, not mine) discusses their relationship with outsiders, since they like to believe that they have priority of opinion. Sherlock “I am stubborn and opinionated to the hilt and I’m always right” Holmes is putting himself at the bottom of the list of wisdom in this decision. He’s so quiet during this conversation, so cautious with his words despite knowing exactly what’s going on; it’s furthest from him being boisterous about being right. That’s how much she means to him.

He’s offering Joan that big step out of a formally regulated relationship between a client and a doctor, into that of partners (in crime). He does mean to teach her, but in using words like companion and partner, he makes it clear that that won’t entail a shift in power dynamics to his advantage; because he needs her, maybe not chiefly to stay sober anymore, but in his work. She ups his game, and she has come to love the job of consulting detective. They’re friends, full stop.

Plus, Joan’s ways of keeping him in line are brilliant. Stupid locks. There are still rules, because Joan needs those, because it’s her decision and so she’s going to damn well own it; and Sherlock will stick to them, because he needs her.

And this is quite possibly the cutest behind-the-scenes photo of them out there: