The case runs like this: rich guy thinks he’s being genetically engineered to kick the bucket. Sherlock Holmes doesn’t believe it’s possible. Rich guy then shoots his driver, Sherlock takes the case—and a bee that’s, apparently, worth a whole load of money. Sherlock investigates and his theories bring all the boys to the lab. Any questions?

And then, just as the temporary prime suspect, Natasha’s fiancé, reveals himself to carry that Warrior Gene, dark, suspenseful, slightly Twin Peaks-y music sets in to symbolise the dark recesses of the soul and the dude’s suddenly skyrocketing creepiness. Well. That was subtle.

If you know the record-keeper (or, well, know what he likes), your DNA is only as real as you need it to be. In a world in which innovation in genetic modification is as steadily advancing as it is fought against, hereditary diseases are, in Sherlock’s universe, set to be the new age of biological warfare. On a smaller case, it can at least be used to eliminate a series of high-profile targets — but to what end? To get more funding: get wealthy people to “contract” CAA, then have them donate wads of cash to further the research. The man behind it, Watt, carries the disease himself. After failing to find a cure, he hoped hatching this plot would help in time. Not quite.

Suffice it to say, that was one of Elementary‘s more bizarre cases.

Then again, building dinosaurs is all we ever did in 10th-grade Chemistry. (Also, kudos to Jerry. Also-also, kudos to the writers for having Sherlock poke fun at Joan for having been involved with her Genetics instructor, not shame her for it.) 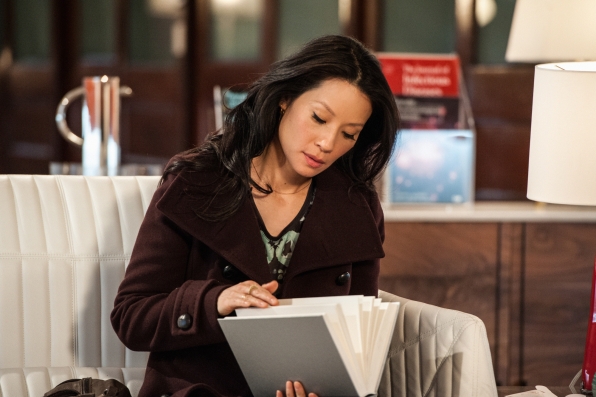 At the same time, Sherlock has taken on his role as tutoring Joan in the science of deduction. He wouldn’t use Joan as a dry-cleaning mule (although a chore wheel does have its perks) — unless the dry cleaners weren’t actually dry cleaners but a money-laundering enterprise for the Russian mob. How neat. As obnoxious at Sherlock can be in his teacher persona (though never condescending), he does it well. It’s exciting to see Joan utilise his methods and training her observational skills, then making the deductive leaps towards the right conclusions. Trusting your own instincts is a huge component of that, as well as bit of trial and error. Sherlock is as excited about Joan’s progress as she is: because it makes her happy. We haven’t seen her this bubbly in all of her time with Sherlock; she loves what she’s doing now, and it’s brilliant to watch. Sherlock’s proud to have her as his colleague (see the little jerk of his head at Bell, non-verbally saying, ‘That’s my girl’), and with more practice, Joan is going to emerge a magnificent detective.

A good detective knows that every task, every interaction, no matter how seemingly banal, has the potential to contain multitudes. I live my life alert to this possibility. I expect my colleagues to do the same.

It’s so great because, most of the time, they make you forget that it’s early days for them yet; and then, something like the dry cleaning pops up and you see all the friction and the things they still have to work out. But still, you see how seamlessly they work together, and you see the potential for the development of their friendship and partnership and [muffled screaming in the distance of the Universe].

Next: Déjà Vu All Over Again.