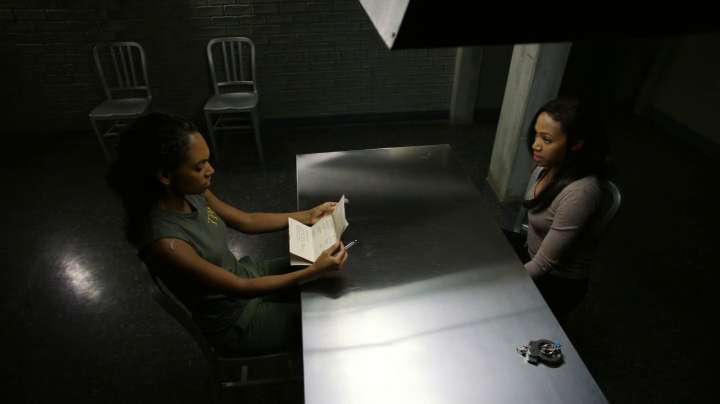 Previously on Sleepy Hollow: For the Triumph of Evil.

This is the tale of the two amazing sisters and their pet revolutionary soldier, who occasionally acts as a mediator. Or: a study in Ichabod Crane’s body language.

Picking up exactly where last week’s episode left off, we get to see the aftermath of Jenny’s escape from the psychiatric hospital. Abbie is able to buy them some time from Captain Irving — by the way: follow @TheOrlandoJones on twitter. You will not regret it, that man is fandom comedy gold. Where was I? Right. After Abbie persuades the Captain to delay the search, Ichabod proves himself to be a rather apt investigator. They manage to track down the last foster mother that Jenny had stayed with, and the encounter reveals several things: the foster system and children’s services are too easily abused. And not only that, but Ichabod knows a thing or two about conflict resolution — and reminding Abbie to step away.

Body language is very important in this example, because there are several ways that Ichabod could have done it — and will continue to during the episode. Running interference always means declaring which side you’re on, and your body language reveals what you mean. So.

Ichabod bodily moves in between Abbie and the foster mum, to break eye contact and snap Abbie out of the spiral of guilt that the goading is supposed to trip her into. Undoubtedly, the movement is designed to shield Abbie from that train of thought, but it’s done indirectly. If he had faced the foster mother, that would have implied her having to go through him to get to Abbie, and telling her so head-on. But that isn’t what Ichabod wants. Abbie’s fights are her own, and unless she’s in immediate danger, he won’t protect her that way. He doesn’t mean to take the fight from her because she can’t defend herself. The very fact that he puts his back to the other woman screams, ‘she’s not worth it.’ He simply means to show that her goading shouldn’t trip Abbie up, that this is not the time. Turning his back to Jenny’s foster mum tells Abbie, ‘I’m on your side, but don’t let this person upset you, we have more important things to do;’ and it tells Jenny’s foster mother, quite simply, ‘Kiss my 18th-century arse, because I couldn’t give a shit what you think.’ He also could have placed himself in the middle, facing at a 90° angle, which would have implied a mediating capacity, trying to foster compromise. That, here, is explicitly what he’s not doing. 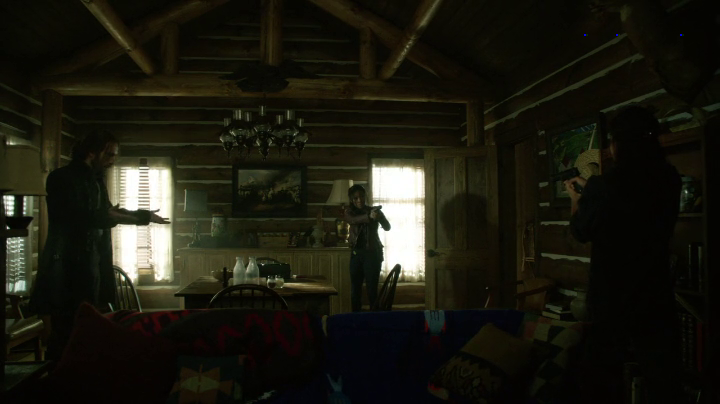 When Abbie and Jenny are back together in the same room, weapons drawn and fighting, that is exactly what he does. He remains on the other side of the table, wisely — one, because there’s guns, and two, because he recognises their space. This is their conflict, and he’s there for them both, but he won’t get caught in the middle. Which is why he berates them both: Jenny for antagonising Abbie into a fight, and Abbie for making herself such an easy target. In principle, this is toeing the line of Rational Man Cautions Women Into Behaving Instead of Catfighting, but the crisis is averted by Ichabod making no actual comment on it. He doesn’t attribute their behaviour to their gender, they’re just fighting siblings who have a lot of issues to chew out. He, as someone with outside perspective, merely wants to lend a helping hand in getting past those issues and refocusing the situation if they get in the way. Abbie and Jenny are two very different people with very different approaches to this kind of situation, so naturally there’s going to be conflict. And that’s why this is good, because their fights focus on that, mostly.

Once they know each other a little better and the three have had a proper discussion — about Corbin and Jenny being friends, about her hunting down artefacts for him, about, y’know, Ichabod being a 280-year-old revolutionary soldier — Crane moves on to a more direct approach in dispute resolution:

Just barge right in and off through the middle, I say.

This Sleepy Hollow narrative is great for that reason: there we have two WOC characters with differences and similarities, with history and baggage, and with well-fleshed out personalities that let them grow and evolve. They are the leads here, with Ichabod along for the ride, completing the triad. There’s not just the two Witnesses, there’s an awesome sister, too. The scene at the very end was wonderfully done, and very touching. Abbie has taken a step in the right direction to make amends, and although Jenny can’t forgive her right away — rightly so — she acknowledges it as the effort that it is. They both respect each other’s feelings on this, and perhaps, with time, they can move forward together. They’re at the centre of this, so them figuring themselves out is going to have the most important consequences for this story.

Katrina didn’t get any screentime this week, just a mention. Did Ichabod seriously figure out how to call the service hotline of the car manufacturer, have the lady unlock the vehicle, and then just… chat about having love and lost for who knows how long? Ok.

One nitpick that I do have: dear Sleepy Hollow production, I’m German. I have largely given up on US shows getting German accents or the language itself right, but I know that something is majorly off when I don’t actually recognise it as being German. That Hessian soldier in the beginning was terrible, the only bit I understood was “und setze mich ohne Einschränkung unter deinen allstarken(?) Schutz” in the middle, the rest could have been pretty much anything, including an angry poem in Elvish. Ichabod’s recognition of the tattoo was pretty bad as well, his, “Hast du es, mein Freund?” was actually correct, and the guy who opened the doorway to Hell was really rather good. So it did go from abysmal to alright, but, really, guys, that’s not how you do German. Kudos for trying, though; but I’ve heard from several other people who know German and who, on first viewing and being unprepared, thought that the writers had cooked up some other mysterious ancient language.