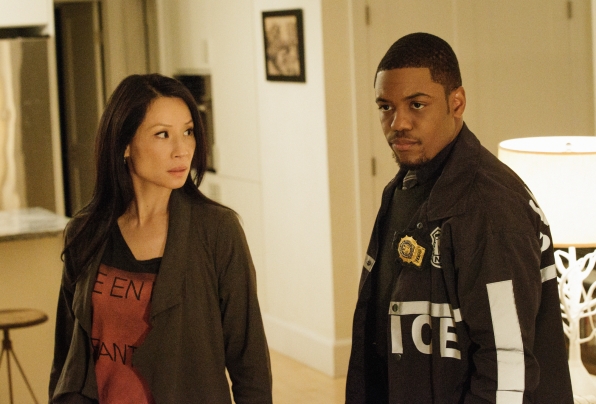 Previously on Elementary: On the Line.

Remember how, a couple of weeks ago, I was so happy about Gregson, Bell, Joan, and Sherlock closing ranks and becoming a family? Yeah, well. In Tremors, the writers took it upon themselves to reset the clock.

I loved this episode for many reasons: for one thing, because it played in only a handful of places. Leaving most of the action — and action here means brilliant dialogue and not much else — in a courtroom gives the episode a much more sedentary feel and a different pacing. The story behind the hearing is told in flashbacks intercut with Sherlock and Joan’s testimony in cross-examinations, which address what’s a stake: their future with the NYPD.

Joan testifying on-screen as to what happened to Detective Bell outside the precinct that day is very telling, because it removes Sherlock’s true emotional reaction to the shooting from us even further. We only get to see his turmoil until after the hearing, when Joan warns him not to lie to her. It’s the other thing that I like about this episode — the way Sherlock deals with what happened (or not), and how he feels that reflects on the work he does. Yes, people get shot when they work for the NYPD; yes, police officers swear to protect at the cost of their own lives. When Bell pushed Sherlock out of the way and caught that bullet, he didn’t think of the consequences. But now, the consequences are dire and very real.

Sherlock says to Joan that what transpired that day doesn’t make him reconsider their methods, simply because they work. And yet, his mind supplies exactly the ways he could have gone about this to better safeguard himself against something like this, to better protect the people he works with, and he knows exactly that doing it that way would have worked, too. But it was his hubris, and his disregard for the rules that led Bell to hospital, and he knows it. When he says, at the hearing, that is has to count that they saved an innocent, mentally ill man from a life in prison/a psychiatric ward for the criminally insane has to count, he doesn’t just say it to convince the judge, he says it to convince himself. And I wonder whether this will spark any change in his behaviour. It chimes in with what Joan told him last episode, that showing respect to the other detectives doesn’t hurt, but helps to protect them; and it echoes Gregson’s admonition that being nice is the smart play.

He does care about Bell, very much, but it interferes with his disdain for the ordinary, with his contempt for being anything other than brutally honest with everyone he meets (except for Joan). He strives to remain true to himself, refuses to see the benefit of changing his tune to appease others who may not like him. Well, he may theoretically see it — he just refuses to act on the knowledge.

With Detective Bell, that sets him back to square one. They were on the way of working up a good relationship, Bell reacting with amused exasperation to Sherlock pestering about coming to the brownstone to practise fencing with him. But now, even though Bell has advised the Commissioner to keep Sherlock and Joan on with the NYPD, based on the merit of their work, he’s not Sherlock Holmes’ biggest fan just now. Strictly speaking, it isn’t Sherlock’s fault. He couldn’t have known what would happen, of course not. But there are ways of keeping his friends safe, beyond fencing training and gun control, and he has to adopt some of those ways. Doing their work with the NYPD will always involve taking risks, but I daresay some damage control and informed risk assessment of a certain someone’s recklessness is in order.

I hope that Marcus regains full use of his arm, and that he’ll be back with the department soon. They need him — the show needs him. I hate that they did this to him, and that they did this to the family. Sherlock had it coming, that’s for sure, but threatening to break up the family like this always hurts. Hopefully, Sherlock will do his damnedest to make this right and perhaps, in time, they can repair their friendship.

P.S.: Sherlock is a stress baker. Somehow, it doesn’t actually surprise me.