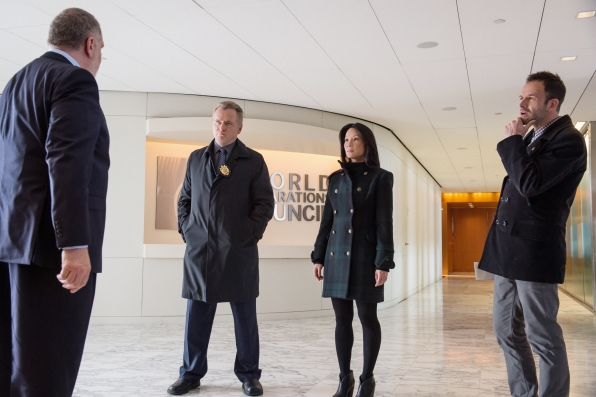 Even as he’s clinging to the fact that he did nothing wrong, Sherlock just can’t seem to shake that guilt that he’s been feeling ever since Bell got shot. Wind him up and watch him go…Sherlock’s distracted, he feels terrible — Bell’s recovery is always somewhere in his head, blocking his deductions. And yet, he insists that that shouldn’t be the case, as he’s done nothing wrong. He doesn’t understand what’s wrong with him — or at least that’s what he tells himself.

Alfredo takes it upon himself to explain it to him: somewhere along the way, a little empathy crept in. Sherlock will later tell him that he’s always felt compassion, sympathy for the victims’ loved ones, and that he understands human emotion, has to, in order to figure out killers’ motives. But now, he’s different from the consulting detective he was back in London, or at the beginning of his time in New York. Joan changed him, rehab and therapy changed him, Miss Hudson changed him, the meetings changed him, Alfredo changed him, and working so closely with Bell and Gregson changed him. Learning the secret of Irene Adler/Moriarty changed him. He refuses love more now than he’s ever done before, which is another reason why he so stubbornly doesn’t acknowledge what’s going on in his head.

And just then, Alfredo introduces him to Randy, a young recovered addict who needs a sponsor of his own — and Sherlock’s supposed to be it. The speech he gives Randy at the end, the “contract” they have drawn up in that one, single, short conversation may hold true, maybe they won’t. After Joan and Alfredo, Randy is another experiment, if you will — an experiment in the longitudinal study called, “Sherlock Holmes and People He Didn’t Want to Grow Fond of and Yet Very Much Did.” I look forward to hearing Randy’s story, to see more of him, and to see how he and Sherlock will shape each others’ lives. It may work, it may not — is Sherlock really ready for this step? Bell isn’t going to let Sherlock help him, Alfonso is right on that; but whether taking Randy as a substitute for this caring instinct will really work out, only time will tell.

Much more interesting, however: that offer Bell got from the Intelligence squad. Protecting New York from the next big attack? Oh dear. There’s no doubt in my mind that Bell would excel at any task given to him — the question is, does he really want to give up homicide to become an analyst? He’s a brilliant Detective, and those brains can be of use anywhere, but is he ready to leave the team, that dream of his to become a cop? Not to mention that a dose of healthy mistrust of shady intelligence-gathering types is rather omnipresent at the moment… His relationship with the consulting detectives is still on the rocks, although it is clear that he’s angry with Sherlock more than he is with Joan. But still, she, too, has trouble getting through to him.

What we can look forward to after Christmas break: Moriarty is returning, and it’s gonna be good.

Next: The Diabolical Kind.