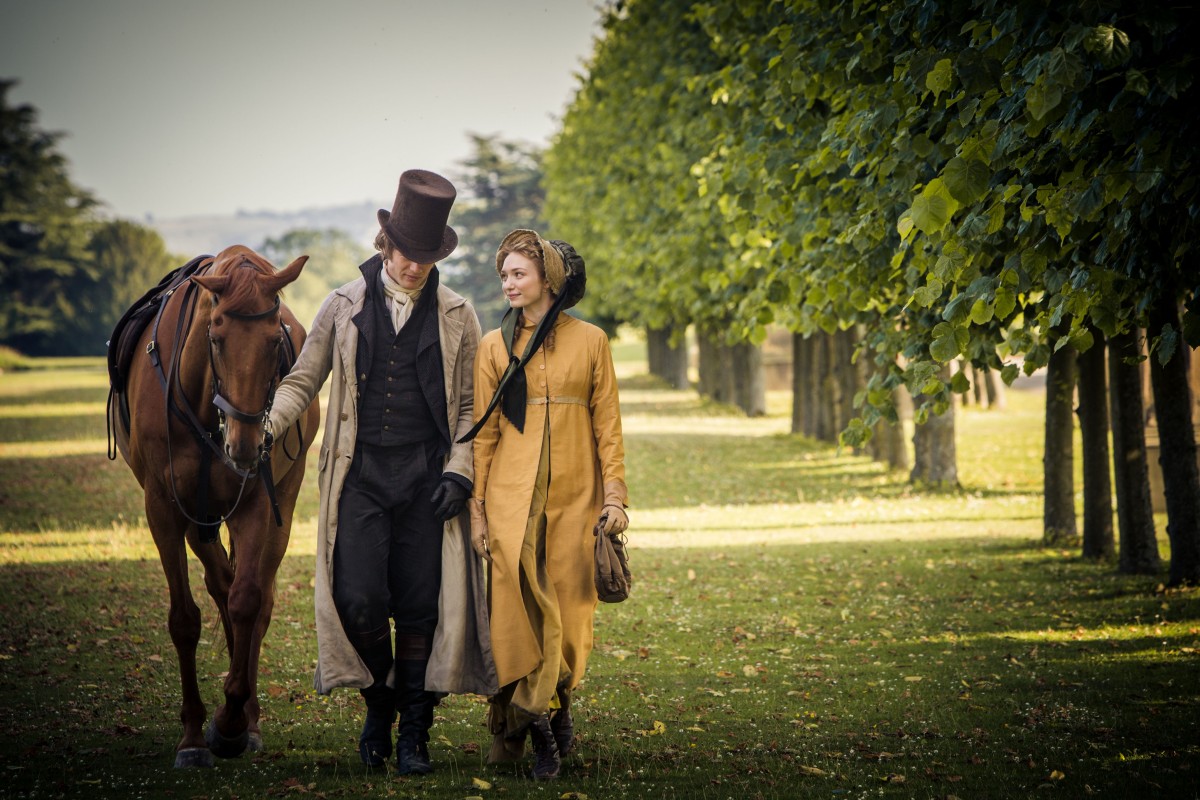 Good grief! As Pemberley falls into a state of uncertainty and disarray, Darcy reverts back to his Lord of the Manor persona and drags Lizzie and Georgiana into misery on his coattails. In case you missed it, the subtext beneath Lizzie and Darcy’s (understatedly) heated arguments runs as follows:

No, poor Georgie can’t marry the man she loves, we’ve only just finished paying the mortgage on the house. And no, Lizzie, just because I married you against my public duty and against the great tradition of Pemberley, that doesn’t mean a stupid stray comment from your vapid sister Lydia won’t send me reeling, totally believing that you only married me for my money and the frankly massive library on the second floor.

What a load of bollocks, Darcy. 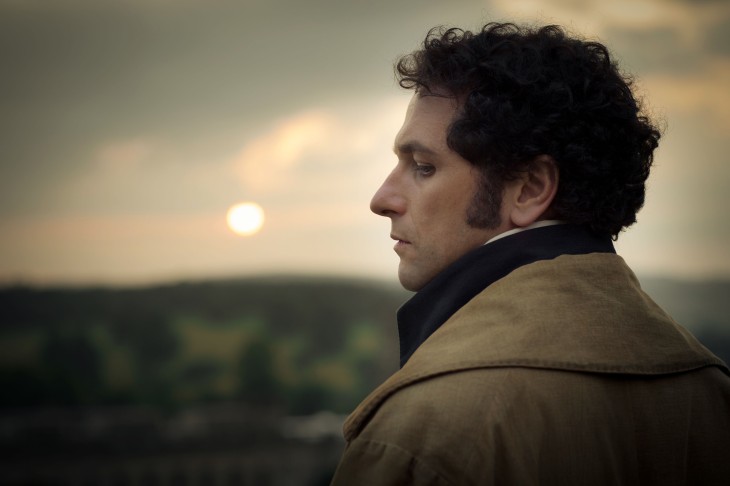 I mean, Georgiana’s situation, I understand. Her words imply that Darcy did indeed let her choose between Henry and the Colonel — except I also wouldn’t put it past Darcy to slip in some, er, commentary on the whole fiasco. You know, the kind where he expresses his doubts as to certainty of Avelston’s character, and the fact that Colonel Fitzwilliam’s station in life is much more secure. That sort of thing. Combine that with Georgiana’s sense of duty and responsibility for Pemberley and her family, for Darcy, who she fears still worries about her judgement (I did flip through the book yesterday and saw that she tells Lizzie that she doesn’t think Darcy will trust her judgement ever again after what happened with Wickham)… it may be her choice, but it’s clearly an unhappy one. Contrasted with Darcy’s own blatant disregard for convention in marrying a Bennet from Longbourne six years before… it just smacks of double standard. It’s clear that Darcy, on a good day, more readily sides with Lizzie and Avelston and leans towards a more progressive stance on women making their own decisions and making the best of what power they can get their hands on, but it’s also clear that he still closes the door in Lizzie’s face when it comes to official magistrate business, now that the family’s under fire and he’s not thinking clearly. If this weren’t the huge problem it is, he’d be asking Lizzie for advice. 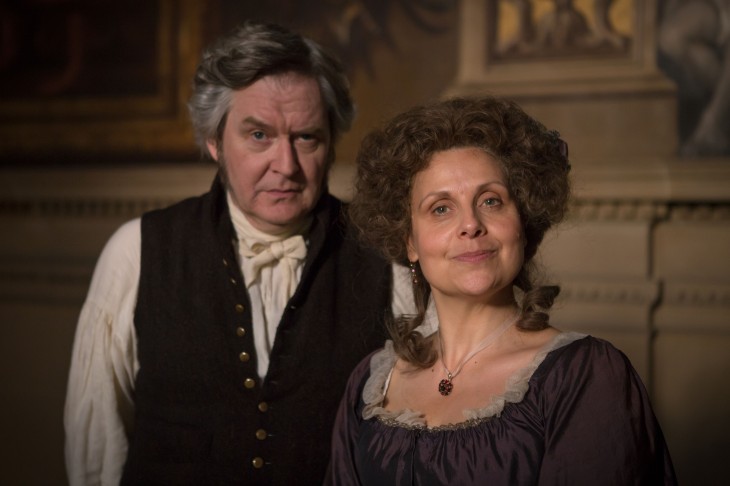 And then there’s the fact that Darcy now believes he’s made a mistake marrying Lizzie, that he’s exposed Pemberley to… to what, exactly? He accuses himself of following a flight of fancy and sentimentality that he should have crushed when he still had the chance — and he accuses Lizzie of marrying him for financial prospects and security, not love. Which is then the exact same thing he wants Georgiana to do — marry the Colonel although she does not really love him..? The only thing that saves this from being a complete contradiction in terms is that Fitzwilliam would know exactly what he’s getting himself into with Georgiana, whereas Darcy now probably believes that Lizzie’s been deceiving him. Oh, boy. Where’s that Darcy from two days ago who misappropriated business letters as love notes?

It’s also so hard for Lizzie to watch because she’s being reminded all over again of the differences between the family she came from and the one she married into. Being born into a great estate such as Pemberley is different from being a Bennet. For Georgiana, it’s about making sure that the estate remains with the family, and that the families dependent on the land don’t lose it. It’s about making sure that the line can continue, and for her that means that her desires come second to what’s best for the estate. I know that I could argue that this is mostly the social gulf between Lizzie and the Darcys opening up all over again, but in some aspects I think it’s more about Lizzie’s free spirit than about class. Lizzie knows what it’s like to consider marriage for survival — she nearly would have had to marry Mr Collins to ensure that she and her sisters wouldn’t be run out of Longbourne after their father’s death, they feared being destitute and left with no fortunes whatsoever. She’s no stranger to these considerations, and while Georgiana is worried about the family sinking in rank, for Lizzie and her sisters it was always about seeking a chance of social upward mobility. Only that Lizzie was always determined to marry for love and nothing else. It’s her free spirit that made her choose Darcy, and it’s her strength of will and belief that no human being is lesser than that makes her wish for Georgiana to go against convention and marry the man of her heart. She’s not blind to the realities of the world they live in, but if she and Darcy could do it, then why not Georgiana? It’s Wickham haunting them all over again. In a world in which women’s fortunes are entirely dependent on those of their husbands or male family members…

In this aspect, this second episode finally picked up some traction, but not in the way I had hoped. 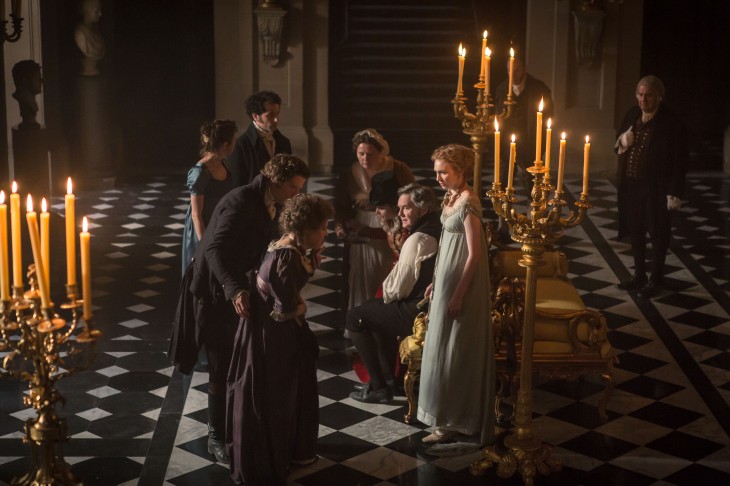 Ah, Wickham. Being found guilty by the magistrate’s court, it’s also revealed that he’s the father of poor Louise’s baby — how did he manage that, running back and forth, and so close to Pemberley itself? Kudos for sneakiness, points taken off for being a do-no-good asswipe. Even from his cell, the man is making demands — and it’s funny, because if he really is innocent, we’re supposed to root for him a bit. Except I’m far from rooting. At all.

The same goes for Lydia. I mean, she’s always been a bit of a caricature, same as her mother, but for goodness sakes! Any time she opens her mouth, you just want her to shut it again — but keeping her sedated 24 hours a day isn’t a solution, either. (I’m looking at you, Messieurs Bennet, Darcy, and Dr McFee.) I’m afraid that while in Pride & Prejudice and in some of the adaptations, at least Mrs Bennet is afforded some latitude by her having the ungrateful burden of securing a future for five daughters in a world such as it is described above, here neither Lydia nor Mrs Bennet are getting any room to breathe outside of the tight moulds their characters were cast in. And now I’m wondering if that isn’t for the fact that there are indeed such vapid, self-centred people out there… in which case, hurrah for realism. Still, congratulations to Jenna Coleman for playing such an utterly unbearable Lydia, it’s no mean feat.

So next week we’re getting an appeal in a fancy court? My, Darcy, sacrificing some character development to help your worst enemy prove his innocence…