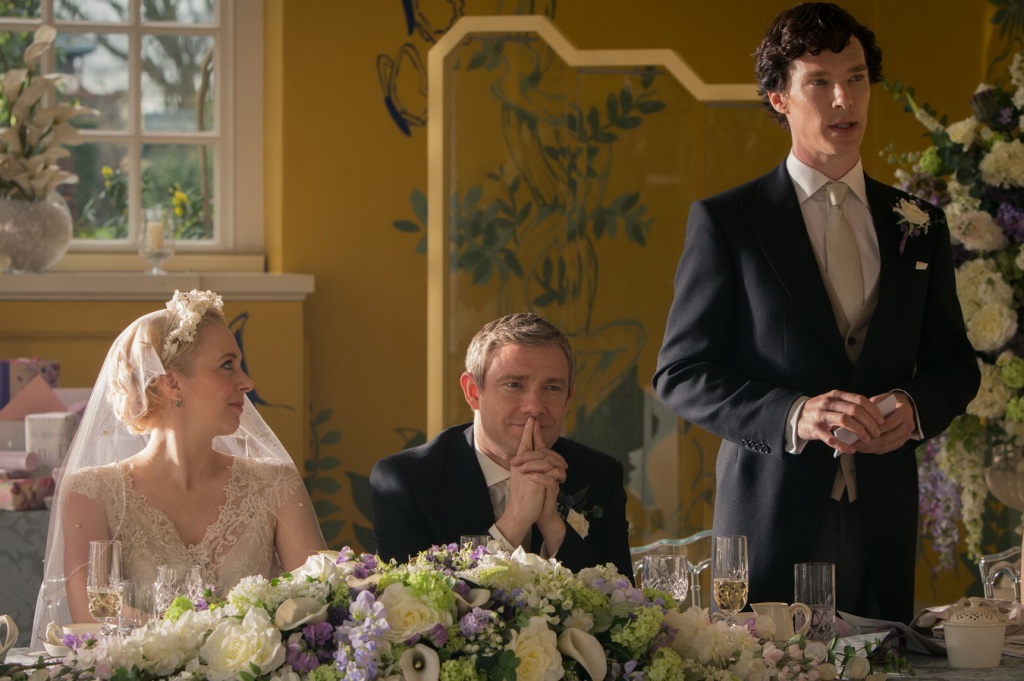 I talked a lot about how Sherlock feels in my review of the second episode of Series 3. I’ve talked about how he’s terrified of losing John to domestic bliss, but also determined to let him and Mary go if that will ensure his absolute happiness — rather than Sherlock’s own.

But there’s another dimension to this, and that’s John and Mary.

In this series, we’ve seen a grown emphasis on people — even people as close to John and Sherlock as Mrs Hudson — still presuming that they’re a couple, and John’s insistence that he’s not gay is as loud as the producers’ denials have been during the past two years.

Rule one: the doctor lies.

I know that people have called for the producers to just make the relationship official already if even somebody as intimately acquainted with them as Mrs Hudson is makes the “mistake” of thinking they’re romantically involved. The thing is, what would happen to the show if they did? Of course it would be a landmark for queer representation — it would also greatly upset the more conservative part of the fan base, a highly influential group that is still in the majority. Purists are of every age, and they don’t want to hear of any shagging going on in Baker Street. The BBC itself might be opposed. Of course they shouldn’t have to hide — but when life hands you lemons, you play both fields while maintaining (more or less) plausible deniability.

Mark Gatiss has cited, on numerous occasions, the influence The Private Life of Sherlock Holmes has had on him and his co-writers; the movie that has Sherlock lie about being in a committed relationship with Watson in order to get out of a most delicate situation. Read this piece in the Guardian for edification of Gatiss’s thoughts on it.

It’s about reading between the lines and codification. I wrote my Bachelor’s thesis about the relationship, the cataclysmic change in Sherlock and John as it is portrayed on this show, and about how it’s clearly framed and narrated as either a love story, or, if we’re being technical, as a kind of companionship that has the exact same value and impact as a traditionally romantic love story would have had; regardless, necessarily, of physical relations.

The on-screen vs. the off-screen

The stag night is an example extraordinaire, because it has Sherlock and John playing mikado with each other’s limbs and moving as smoothly and unguardedly in and out of each other’s space in a way that we haven’t seen on screen in all the time we’ve known them.

John, after putting his hand on Sherlock’s knee to steady himself. “I don’t mind.”
Sherlock: “Me, too.”

Sherlock taught John how to dance behind a closed curtain.

That hug at the wedding wasn’t their first such close physical contact.

All those jokes John made in The Great Game and The Reichenbach Fall, people will talk? Exactly, and that’s what they want. If someone as close as Mrs Hudson being told she’s wrong at presuming that John and Sherlock are in a relationship, that’s not shoving it into our faces, that’s meta commentary on the fact that we are Mrs Hudson. We know them as well as Mrs Hudson does, because we’re with her on the other side of that curtain. When John tells Mary that, we are with Mrs Hudson as she catches them, we’re the rumours. We know them as well as she does, and we ship it. So we’re not getting it wrong, are we? Sherlock, the series, is all about the things that we can’t see, but that Sherlock can. Perceptions are devious, and the writers lie. Either to themselves, or to us.

The marriage of three

At the reception, the happy couple traditionally receives the well wishes of their guests. Except here, it’s not a happy couple — Sherlock stands with them, plain as day, and no-one questions it. There’s no bridesmaids or other groomsmen, just Sherlock, receiving well wishes along with Mary and John. After Sherlock deduces that Mary is pregnant, they disappointedly realise that they can’t very well dance all three together. Mary tells Sherlock, “neither of us were the first,” when he’s jealous of the Major John won’t shut up about. When the bridesmaid tells Sherlock she’s kinda sorry that he is the way he is, John comes looking for Sherlock to fetch him for the dance. Sherlock’s violin is the only instrument playing the waltz he composed for John and Mary, and they’re the only ones dancing. When the first wedding photos are taken, Sherlock remains standing next to John and Mary, who have to remind him that it’s supposed to be just the two of them — and it feels wrong, doesn’t it? It feels like Sherlock should stand with them, that’s where his place is. Sherlock says that he and Mary are the people who love John most in this world, and that they have a lifetime to prove that to him.

He’s pledging himself to John along with Mary. Equally.

Mary knows exactly how much John and Sherlock mean to each other, she knows how much they need each other, and she’s not jealous or destructive for one single second. She encourages them, enables them. She knows. She’s just as determined as John is to not let Sherlock slip away, to not be that couple that just disconnects. It’s not the end of an era, not for John and Mary.

So many people have commented on the fact that the wedding photos of John and Sherlock together look like they’ve just gotten married — because they’re dressed the exact same way, and there’s no other groomsmen; their outfits, like Mary’s wedding dress, are unique. There’s just Sherlock on John’s other side.

This is an OT3 marriage.

No, we’re not going to see them kiss on-screen. But in these two episodes, we’ve been given enormous encouragement to think about the off-screen, and make it true.

You can interpret their relationship any way you like. You can see them as friends, you can see them as friends who share a bond as emotionally deep as lovers, you can yell at me for writing this as people have before. But you can also take a look behind that curtain, and I dare anyone to tell me that I’m a lunatic for reading between the lines. For making deductions of my own, which is exactly what this show has always invited us to do, because ambiguity has always been there — now you see me, now you don’t. There’s always a layer underneath everything that happens on this show. So have fun deducing.