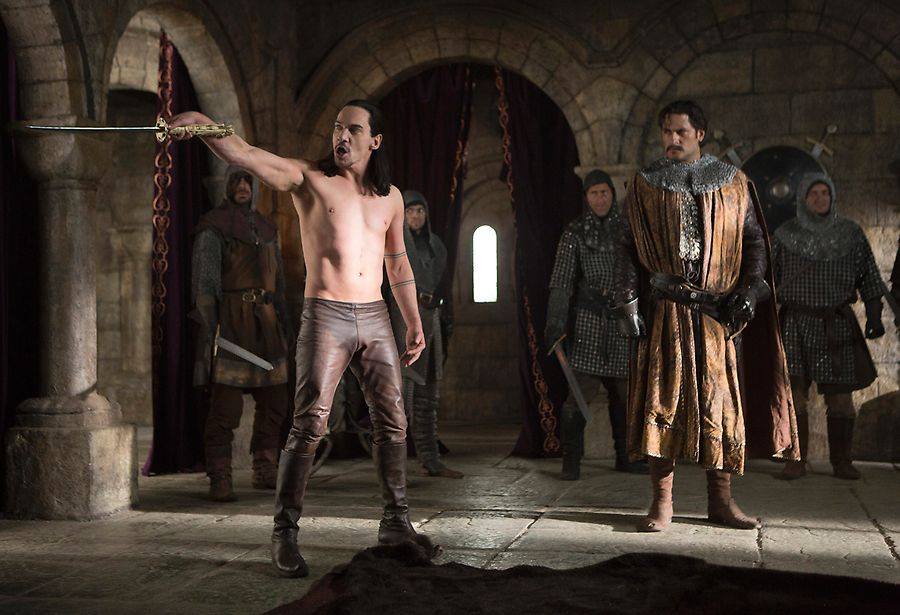 Previously on Dracula: Come to Die.

This is a collective review of the last two episodes of Dracula, Four Roses and Let There Be Light.

This is a mess. One huge, out-of-control mess. It’s motivations, plot-lines, and characterisations all over the place, and the writers don’t even seem to be trying to clean up after themselves. It’s incoherent, it zigzags back and forth, things that are a huge deal, like Van Helsing breaking up with Dracula, sort of just happen on the side, while other stuff that, yes, we get already, are drawn out over and over, totally ad nauseam. It’s one thing for characters not to be able to make up their minds. It’s quite another for the narrative to screw the characters over ten times per episode.

What with Jonathan having slept with Lucy, Mina’s life is now in complete disarray. Or is it? At least she had the guts to call him out on his pathetic excuse. Lucy threw himself at you? Aww, poor Jonathan! Of course, when someone makes eyes at you for two weeks, completely deceiving you because she’s actually a lesbian, you can’t be held responsible for your very own decision to sleep with her. Ugh.

The thing is: as ever, any agency that these women have — Mina calling off the engagement, Lady Jayne reminding Browning that his children are secondary to his duty to the Order, Lucy standing up for herself against her mother — is constantly undercut by one man: Dracula.

If Lucy hadn’t told Mina about her night with Harker, Mina wouldn’t have ended the engagement. If Harker hadn’t told Mina she loves Grayson, she never would have said what she did at the hospital. It’s not even Mina’s own head working all of this out. That’s what these writers can’t seem to understand: narrative, plot, and action are the result of a simple principle, actio and reactio. Basically, it’s physics. In physics, there is such a thing as inert mass. But if there’s one thing, in narrative, that characters should never, ever be, is inert mass. Everything in this plot just happens to Mina, anything she does is merely in reaction to something someone else said or did; when, ideally, a character’s motivations and actions are a mixture of both, of initiative and reaction. Otherwise, their plot function is seriously impaired, because they are rendered incapable of driving the plot, they’re prevented from pulling their weight. Of course, that also makes them pliant plot devices, because they can be pushed around the way the writers need them to be, to the convenience of the protagonist and the plot that he is allowed to drive. That’s what’s happening to Mina. Mina immediately seeks to hear from Grayson that he loves her. Lady Jayne is still blind to Grayson’s real identity because of her feelings for him. Lucy is “made into a monster” by him, a man bent on protecting a woman he deliberately keeps secrets from, a man who does not know the whole story, and who thinks he doesn’t need to have all the facts before condemning someone to a fate he himself wants to escape.

Lucy Westenra is not a monster. Except now, she is. I was excited for Lucy becoming a vampire, but not like this. I hope that this will actually give her agency and the freedom to be who she wants to be — but since she’ll be at Dracula’s beck and call… probably not. He’s her sire, so she has to do anything he wants. 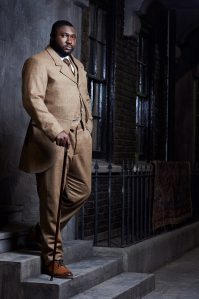 Just like Mina will now probably do anything he wants. She’s been dreaming of Ilona, his dead wife, since she was a little girl — Ilona reached out to her after she left the hospital, so that probably means that their personalities are seeking to converge. What the writers — and Dracula — seem to forget often enough is that Mina isn’t just Ilona. She’s Mina Murray, too. And I hate that it’s such a foregone conclusion that they will end up together just because they’re destined to. Mina doesn’t question how Grayson can tell her that a woman she’s been dreaming about for two decades is someone who he used to love, Mina doesn’t get furious with him for pushing into her life for months and now saying that he can’t tell her he loves her because he’s got to “finish” something first without telling her what it is. If she were Ilona, he’d probably tell her the whole story, his whole plan. But he doesn’t, so that means that, subconsciously, he does treat Ilona and Mina as two different entities. That also means that there’s a narrative being set up where Mina and Ilona merge — or, even, where Ilona takes over Mina’s consciousness. Of course, that’s all going to be perfectly alright, she’s the reincarnation, after all; then making it ok for her and Dracula to be together again.

After he’s told her the beastly little secret about him being a vampire, of course. Yes, right. He still hasn’t told her that, denying that the ferocious killer Mina saw saving her was, in fact, himself.

Yup, because that’s what’s happening here: Dracula/Grayson handles the business end of things. He destroys the order, he’s the one with the plan. He’s no better than Jonathan keeping his investigations a secret from Mina. It’s still the same division of public and private, dangerous business and domestic bliss. Mina’s not being let in on a plan so huge — a plan that directly and intimately affects her life, if Grayson has any say in it.

And after 8 episodes of dithering and dallying, Grayson still can’t make up his mind. Does he love her, does he leave her? Alexander is sure that Mina will hate him for what he is, and he doesn’t want to make her a vampire, because that would be “an abomination.” Then what? Where the narrative is going is that Mina will love him regardless of what he is, romanticising the dangerous and exotic creature in her bed into a loving husband. “He won’t hurt me, he loves me.” Let me tell you something, these two aren’t Remus Lupin and Tonks. Nope. 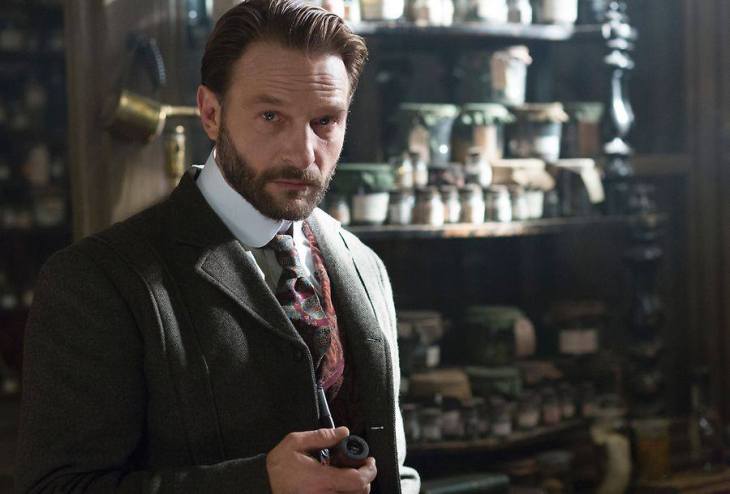 And what’s all this business with Van Helsing abducting Browning’s children, failing to sink so low and kill them, and breaking up with Grayson in the meantime? Their plan is the thing that this entire venture was based on — and in the space of a few minutes of screen time, their objectives have drifted so far apart that Van Helsing wants to go abroad and not come back? All because Dracula is impatient and reckless — something that should, by rights, bite him in the ass. But will it?

Let There Be Light

So am I wrong or did Lucy catch some of Dracula’s blood serum?

And then: enter the Sicilian.

Using the blood of Christ, the über-Seer is supposed to locate all the vampires in London, guiding the gathered hunters to kill them all. The battle has begun.

This show is still a mess, though. Van Helsing has gone completely off the rails, crafting ransom letters with his scalpel and removing the children’s fingers to send to their parents one by one. And that just happens, on the side. No big deal. And while whistling, he destroys his research and the last of the serum. And THEN, he stabs Renfield, promising him that he and Dracula will never walk in sunlight again.  And THEN it turns out that he didn’t not kill the children out of mercy, because they reminded him so much of his own kids. Oh, no. He turned them into vampires, by feeding them with Dracula’s blood. So then, he gives them their father. For an early dinner. This is completely fucked up. And also completely unfounded in narrative. First, he breaks down crying, unable to bludgeon them to death. So instead, he does this? And then burns all three of them, including the kids? A level of completely insane that we had no idea was in his head, completely overturning his own plan? Talk about underestimated character… talk about overestimated writing. The writers had a lot more confidence in their material than they should have. Of course, he used to be a vampire hunter. So now, he’s going to initiate Harker into the family business: saving people, hunting things. That probably was Van Helsing’s plan all along: use Dracula for his own ends, then exterminate the vampires.

Meanwhile, Jonathan realises he has made a huge mistake. That he could be so naive, not to think that the Order’s way of stopping Grayson wouldn’t involve extensive collateral damage… the naive, ambitious boy has got no idea what he got himself into. But while he only thinks about saving Mina, Mina turns around to warn Grayson — to warn the rest of the crowd. But they come to late. The docks explode, and hundreds of innocent people with them. Jonathan’s friend, too. And that’s when it hits him. The terrible mistakes he’s made, trying to uphold his ego and his pride.

Grayson, of course, survives. But now, Lady Jayne knows who he is, and she’s out for blood. Except, sadly, she’s not a match for him. However, he does grant her her wish of being killed, but not turned. She died a hunter, and she won’t awaken. Pity. That’s one female character down.

And, of course, in the end, Mina and Grayson get their We’re Not Dead and We Love Each Other and Mina Still Doesn’t Know She’s Reincarnated And I’m a Vampire Season Finale Sex. Hooray! I’m just looking forward to how they’re going to try and sell me on the idea that Dracula didn’t really have to tell Mina because she’s been dreaming about Ilona all her life, so she knows, deep down, who Grayson really is. So when she says past life, she totally knows he’s really 250 years old, and totally believes that she being there is a miracle. Yeah. Except she still calls him Alexander in bed, so… and seriously, if they want to sell me the idea that Mina can accept this without them really talking about it, I’ll be mad.