On January 30, 2014 the Donmar Warehouse production of William Shakespeare’s Coriolanus was broadcast live in cinemas around the world. One of Shakespeare’s later and lesser known plays, Coriolanus deals with a deeply flawed character at the centre of the very crux of what politics is. In a democracy, the voice of the people is the thing that counts, for better or for worse. The very nature of politics, the negotiation of power in the public sphere, is at the centre of this story, personified in the titular character: Caius Martius, named Coriolanus for his single-handed victory in Corioles, is a brilliant warrior — but a shit politician. He hates the populace, he’s a classist aristocratic snob who believes that some were born to rule — to rule with an iron hand. The people, in his mind, don’t deserve welfare, participation in government, a voice. In short, democracy isn’t for him.

Trouble is, he’s living in one.

Coriolanus, however, doesn’t believe in vox plebis. He believes that, to use Tom Hiddleston’s words, that he can say whatever he wants because he believes it, because he achieved what he did, because he shed blood and earned countless scars for Rome. He believes Rome owes him the right to exact his beliefs. Hiddleston calls this a purity of mind, a single-minded conviction that would be admirable — or, perhaps, is — if it weren’t so completely contrary to our modern understanding of equality in more than one sense.

For instance. Can we admire Coriolanus for his purity of conviction, even though he would favour tyranny over representation of the voices? He mocks the people trying to make their voices heard and count — he mocks those who wanted him to become Consul. He thinks he should be judged on his merits alone, not on his ability to flatter and be, well, ‘mild.’ If people don’t deserve him speaking ‘mildly,’ then he blankly refuses to do so.

Can we admire that man? Politicians who oppress minorities today might carry that same “purity” of conviction. But can we admire them for that? I know I can’t. 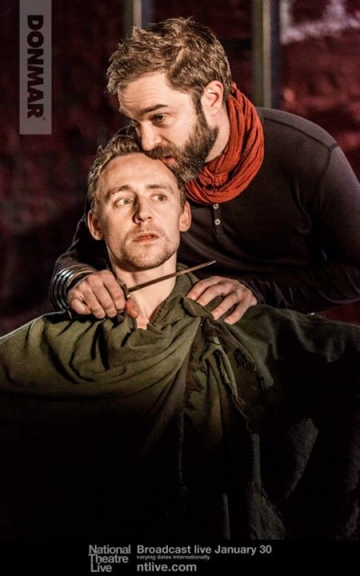 That’s where suspension of disbelief and fiction come in. We cannot admire a bad person, but love the construction of them as a character — a bad person doesn’t have to be a bad character, but no good character is a good person by default. In Caius Martius, Shakespeare has created a character that draws you in with a pull that’s like gravitation, while going against every grain (no pun intended) in your body that tells you that, if he were your Consul, you’d want him gone, too.

Coriolanus isn’t just a play about politics, it’s also a play about power. Caius Martius doesn’t get drunk on power, only on victory and, later, the prospect of revenge. In revenge lies power, too — the power of deciding the fate of the people who betrayed him. But it’s not power in a political sense, it’s not the power of government. It’s more visceral — because it’s personal. That’s why this production works so well. Even though the scenery isn’t more than a Roman wall, even though the space is indicated by four simple lines on the floor, it works. I didn’t need to see lavish interiors and exteriors of ancient Rome. I just needed this. A powerful story and a stunning ensemble cast led by a fantastic Tom Hiddleston that drew me into the world they were building completely. The closeness of the space and the intensity made this, to me, feel more intimate and more gripping than almost any other play I’ve ever seen on stage. Josie Rourke, the director, has crafted an amazing piece of theatre with this.

A huge thank-you to the National Theatre for bringing this to us.