The trouble about FOX continuing to mess with the broadcasting order of TV shows is that I can’t trust the narrative and characterisation. These things have to happen in sequence and in contextual order — but the network’s bozos screwing with the plan without a care for writers’ carefully crafted plans is damaging the series. Characters will seem inconsistent, storylines get broken up and make no sense.

This is so damn obviously the second episode of the entire show: John is still having flashes, he’s still trying to solve the puzzle of Anna, his ex-girlfriend, he’s still seeing the recollectionist, he’s still taking black market drugs. All of those things that suddenly disappeared after the pilot are now back and it doesn’t make any sense whatsoever. The dynamic between Dorian — who remained pretty blank and monosyllabic during the episode because he wasn’t given enough to do — and John is all wrong here: they’re still distant and fighting and sizing each other up, and it fucks over the show’s consistency, and it completely and needlessly detracts from the case that has so much potential for debate. That’s also a reason why I’m not only upset with the network, but with the writers as well. 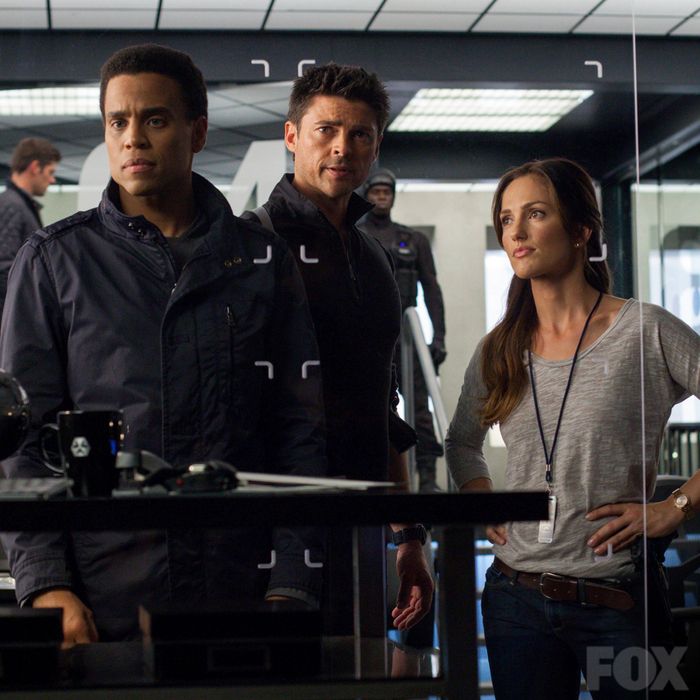 Chromes and Naturals: those that are genetically engineered to be the new elite, and those that are naturally gifted and just as smart. Valerie Stahl herself is a Chrome, as it turns out — but she chose to be a Detective. Again, Almost Human only glances at things that could be explored in a lot more detail. It’s poor form to give a supporting character such a backstory and then just leave it — and them — dangling like that. Why not let it be a storyline that focuses on Valerie, her motivations, her abilities? Explores how she feels about being genetically modified? Instead of mashing this up with the investigation into how Anna could help the Syndicate infiltrate John’s squad. I’m not even in the mood to delve into the very interesting case now, because it was handled so poorly.

Does engineered mean better? Does ‘better’ have to be a thing?

Again, the struggle is between the human, the natural, simple biology — and the artificial, the engineered, the controlled lab environment. Who’s smarter, who’s better — and who has what kind of claim to fame? Trying to find an angle through hallucinogenic drugs that are supposed to make you realise your full potential was narratively ambitious, but overall didn’t really work out. It became a story about the drugs and the technology behind making them — not about the people taking them. I’m someone who’s very invested in education and the valuation of talents and gifts, but this story didn’t succeed in making me care about the characters. Mostly because I was so distracted by John and switching the episode order, but also because it was a great story, badly told. Calling the academy the Mendel after Gregor Mendel, the friar with the peas — very clever. Also highlights what else was missing from this episode: the fundamental debate of whether embryos should be genetically engineered. Did the world unanimously decide that it’s a good idea? Are there no protests anywhere anymore? If there’s one thing there’s precious little seen of on Almost Human, it’s public opinion. Public debate. The controversy that would have surrounded this normalisation of genetic engineering — it’s absent here. Of course, that’s the writers’ comment on the fact that, hey, perhaps genetic engineering is just the logical conclusion to the advancement of science and technology in this and the next century. But everything new that happens on this show… just does. There’s no friction, no countermands. Just advancements. Especially considering that the intro sequence states that there is a lot of friction happening in terms of technological advancements being too fast for humanity, and cops and DRNs/MXs watching over us all… where are the people in this? Where’s the conflict? Where’s the threat, the danger? Where’s society in this? A lot of other questions remain open: how are these children genetically modified? Where? Who does it? How affluent do the families have to be in order to afford it? What kind of sociological effects does this have, if only the already wealthy can try and “breed” the next elite generation, who’s already more likely to hold highly powerful positions?

SciFi and the task of “restrangement”

SciFi is always about us, about society, it’s a reflection of how we deal with things — often by taking them and twisting into shapes we can barely recognise. That’s called defamiliarisation.  Perhaps this way of portraying the advancements made is the defamiliarisation: the fact that it seems to be a non-issue, politically and socially speaking. (The only hint at an ideological conflict was the mention of a right-wing religious faction in Episode 3, Are You Receiving?) But what I believe all great SciFi does is that it shows us different points of view, shows us how people deal with the world they’re living in. Sometimes, taking a relatively small cast of characters to illustrate this is enough. But on a show that is supposed to survive for more than thirteen episodes/one season, it’s not quite enough, and it doesn’t ring true.

All in all, a sub-par episode whose replacement within the series did a lot more damage than good. Returning to the Anna storyline so suddenly doesn’t help with the suspense, it nearly kills it. Stop reordering episodes, FOX. Just stop.