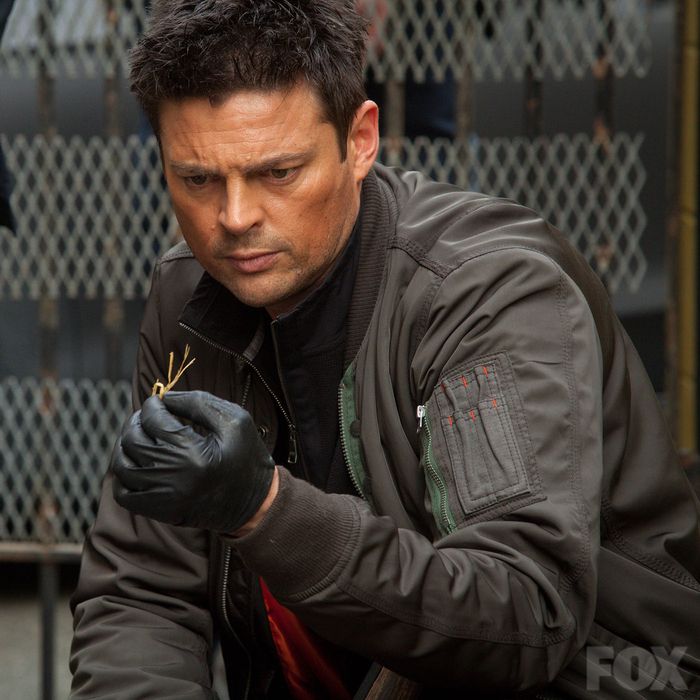 Instead, what we got is the glorious story about the redemption and absolution of another pair of white guys. We get a case story line that makes no sense whatsoever, seems cobbled together on account of us never having heard of that particular shade of John’s terrible, terrible pain before, and that only serves to illustrate how great of a cop John’s dad was.

Instead, the writers have used a select few factoids as shortcuts to achieve this.

John’s father and Dorian — his past, and his present

John’s father, Edward Kennex, was the reason John became a police officer. Dorian is the reason that now, so many years and disappointments later, John wants to stay a police officer. During that conversation in the car, there is no pretending in John’s face or voice, it’s just him opening up to Dorian and telling him that he loved and lost his father, that he’s proud of him and that he misses him. An emotional John Kennex, no holds barred, nothing between his honest feelings and relating them to his partner — a partner who, at the very beginning, he would have told that he wouldn’t understand. John doesn’t blow up at Dorian asking whether it could be true that his father stole from the evidence locker, he doesn’t get defensive. He knows that Dorian has to ask, can’t have known what his father was like, and so he tells him, tries to make him see what John saw when he looked at his father, and he’s convinced telling that story will be enough, because Dorian understands. That tells you how much trust John places in Dorian and his strength, and it speaks to how much Dorian has inspired and encouraged John. It’s a shame that it’s handled almost in passing like that. That scene at the end — at the Chinese noodle stand where John, in the pilot, first told Dorian that he wasn’t like the others, like the MXs — is where they come full circle. Months ago, John would have been infuriated by Dorian giving him a new leg. Now, he’s grinning like a loon, and genuinely grateful and, most of all, excited to give it a go. Can you imagine? John excited to try out his new leg, perhaps hopping through his house in front of Dorian, and walking to crime scenes with a spring in his step the next week? And Dorian is still self-conscious knowing what John has lost, but John doesn’t want to hear anything about Dorian not being human or not being good enough. This isn’t about replacing Pellham, it never was. It’s about being an amazing partner that John doesn’t want to be without. That, Dorian has achieved.

There are many more small things like that in this episode, like the non-verbal communication between them, and the quiet understandings that happen when John doesn’t want the rest of the department to know about Costa, or when he asks to review his father’s case notes alone, first, before sharing them with Dorian. This is all heartwarming, but it’s not enough, especially considering that they’re currently wasting Michael Ealy on a role that has so much narrative and philosophical potential, yet remains scandalously underwritten next to John’s dark past/his shady ex-girlfriend/his dead father. The title of the show is Almost Human. Yes, thank you, Captain Obvious, you might now say, but that’s just it: aside from jabs at John’s fake leg, there isn’t much in the way of exploring that space between almost and human. Where’s Dorian’s side of the almost human equation? Where’s him making tough decisions, where’s him questioning what is his programming and what is his own free will? Where’s John actually grappling with this, asking Dorian questions about how he feels?

And what’s the Wall, anyway?

Oh, and still no-one has deigned to explain the Wall.

All in all, I have to say that I was a little disappointed by this first season. There were many avenues left unexplored, many topics only grazed where there could have been meaningful discourse and some actual reflection of the issues we face today. I love Karl Urban and Michael Ealy on-screen together, and I love their characters and their bond, and I believe that they can do great things together. But the writers have to seriously step up their game. They have such a great vessel in Dorian, such a great opportunity to take his character and make us look at the world through his eyes, to show him uncomprehending in the face of social injustice or poverty, and to have him ask the questions in 2048 that we are asking now.

FOX would do better to stop reordering the episodes next season, too — they claimed that doing so would have no significant (dis)continuity effects, but if they really believe that, then they’re really, actually ignorant. It completely messed up this season’s emotional impact and the character arcs. Guys, seriously. Apart from that, the hithering and dithering when it comes to Valerie and John was really, really unnecessary, too. I’m hoping they’ll let sleeping dogs lie and give Valerie some actual, proper narrative material first before trying any of that again. I will not stand for a female character who has to endure “male protagonist thinks she’s awesome and hot” as shorthand for the real and rounded characterisation she deserves.