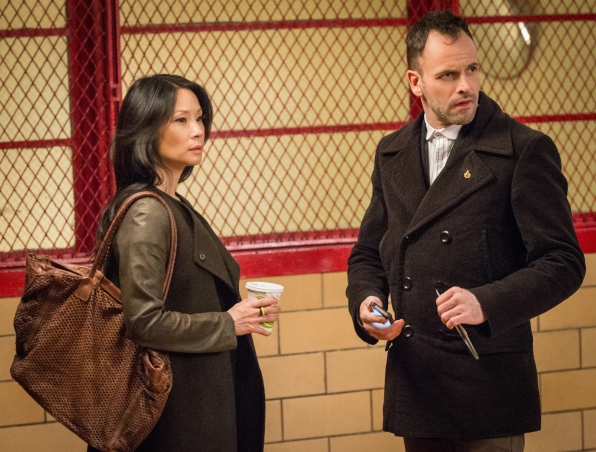 Previously on Elementary: The One Percent Solution.

What this episode does, for me, is highlight why this Gareth Lestrade is a prat and a dick, and why we’re all glad to be rid of him. What this episode also does is annoy me that he gets room and board long enough to get his shit together and get on with it, while we never see hide nor hair of his assistant again, who, presumably, doesn’t have a lot more to fall back on than he did. Except if her parents are exceptionally wealthy or some such, in which case a mention would have still been nice. Just a line, ’cause usually neither Joan nor Sherlock are people who just let others fall through the cracks unless they’re certain whoever it is will be ok — or, unless the person really doesn’t deserve it. As it stands, we’ve seen more terrible characters than her. Like, I don’t know. Lestrade, for instance.

It’s clear that Lestrade is a one-man pity party, and Joan tells him so without beating about the bush. His insecurity and indecision grate on her last nerve, and what does Lestrade counter it with? Making it sound like Joan is just the next Lestrade. Um, excuse me, my man, but Joan is special and awesome all on her own. Sherlock showed her a world, a profession, that she fell in love with, but she retained her boundaries and her values, and she’s still herself, just with 100% more seriously weird best friend and partner. Also, 200% more chickens. For Lestrade to make it sound like it’s only Sherlock that makes them both special — dude. Think. For Joan to encourage him and give him the opportunity to prove himself while remaining positive and to show him the positive side of the medal (instead of telling him he’s being a self-centred shitbag and to get out whether he’s got a job or not — which he would’ve totally deserved) just proves that she’s got angelic patience. Telling yourself that you’re not special without someone else is choosing the path of least resistance, because it lays the responsibility at someone else’s feet. Joan Watson will have none of that noise in her home.

The conclusion at the end shows us a Lestrade who has magically found his arrogance and pretension again. This didn’t help him, it didn’t heal him, because he can only achieve that himself. But he’s still blinded to that because he thinks he figured Sherlock out. So he’ll probably still drink and be a jerk and think he’s the greatest. Especially his talking down to Joan drives me up the wall.

“One day, you’ll know Sherlock the way I do.”

This wasn’t intended as a redemption arc — or, at least, I hope it wasn’t. Because Gareth Lestrade hasn’t redeemed himself, hasn’t even begun. The question now is how often he has to hit rock bottom before he realises that. Possibly never.

The case was one of the best this season, I find. Loosely based on The Adventure of the Cardboard Box, it offered twists and turns and a few shifts of allegiance. It also deals with having a female villain a lot better than the original story — Conan Doyle attributed Sarah Cushing’s villainy to her revenge for a failed seduction of her sister’s husband. In this, she’s vindictive, sure, and out to ruin her husband’s life, but what she wants is the ransom money. Yay!

Sherlock, trying to dismantle an actual bomb in time: You’re staying?
Joan: Mmh, what can I say. I have faith.

Next: The Hound of the Cancer Cells.