Two weeks ago, a new show appeared on the NBC canvas: Taxi Brooklyn, starring Chyler Leigh in her first leading role (on TV, that is) since Grey’s Anatomy and Jacky Ido, who’s probably best known for his role as as Marcel in Tarantino’s Inglourious Basterds, but has since starred in many English-, French-, and German-speaking productions. Here, he’s playing the French-born Leo Romba, taxi driver, to Leigh’s Caitlyn “Cat” Sullivan, New York City cop. Two episodes of the first season have aired so far, and these are my thoughts below the cut. Beware of spoilers.

I really want to like this show, and I kinda do. You’ll have probably noticed that I’m a sucker for anything with a female lead, right? Yeah, you will. So, a new police procedural with a female detective, I’m in.

But then a lot of things happened, and I’m sort of on my way out again.

Cat and Leo in “Brooklyn Heights”

At first, I thought this show wouldn’t try to be Castle, but it sort of is. You know, female cop with a stuck-up business persona, followed around by a good-looking dude pulling her pigtails. And I gotta tell you: where Rick telling Beckett, “I’d be happy to let you spank me,” has at least become a catchphrase, I cannot believe the writers of Taxi Brooklyn went there during the first interrogation. One, Castle didn’t have anything to lose because he knew he had an alibi and a really expensive lawyer. Leo, on the other hand, has everything to lose. So I cannot believe that they actually used that stupid French macho womanizer stereotype for him to try to get out of that situation, and for him to actually disrespect her physical boundaries by touching her arm like that. Leo is a respectful guy, and he’s good at reading people, so I cannot believe that the writers actually want to make me buy into Leo trying it on with Cat in that situation, and in such a manner. Maybe he uses the French macho womanizer schtick when he’s on the pull, and if he does, I don’t care, that’s his business*. But in such a moment?

* And actually, no, it’s not, because: hello? Toxic stereotypes of masculinity? Always be on the pull, flirt with anything that moves, be a studmuffin? Like, what?

And stuff like that becomes a pattern. Both lead characters have moments of such utter stupidity over these two episodes that I’m wondering how they’re still alive. You can just smell that it’s inconsistent writing to wrestle important and/or funny scenes into the plot, and it’s not working.

Exhibit A: Cat’s mother. A cougar straight of the trope pool during the first episode. Do the writers really want me to believe that the death of her husband turned her into a promiscuous cougar ridiculed and resented by her daughter? Yes, loss and grief change a person. But for the writers, the way to most scandalously and dramatically change a woman is to amp up her sex drive? Making her a cougar is a very convenient shortcut for the writers to play the character for laughs — and to take a dump on the severity of her grief. Because Cat isn’t taking it seriously, she makes it clear she resents her mother for being the way she is, finds her ridiculous. Instead of, you know, supporting her. Helping her. No, Cat resents her mother — for being a presentation of the monstrous feminine. So many times in traditional narratives (read: bullshit concocted by the predominantly male canon writers), a woman’s power and narrative drive is tied to her sexuality. The femme fatale, the black widow, Lolita. In centuries of literature, women were either angels or whores. As such, we know where the writers wanted us to categorise Frankie in the first episode. She’s part of the monstrous feminine, the Other.

But then, so is Cat. She’s a tomboy, her dad raised her to be one, Leo says, because he’d have rather had a boy. That just packs so many Daddy Issues into one piece of characterisation that I don’t know where to start. But: she transgresses, too. As a tomboy, you’re a wildling, you’re transgressing what society expects of little ladies. So Cat, as a representative of non-comformist femininity, should support her mother, right? Nah. She resents her. It revives the old myth that there’s one right way to be a woman — and since Cat was intent on pleasing her father and she works in a male-dominated field, it’s gotta be that of the tomboy.

Exhibit B: At least, in this narrative, a dude was fridged in order to give a character the drive for their story. Maybe that’s good — if it weren’t for the notions of Cat’s femininity being decoded in her relationship with her father, if only it weren’t for the fact that it continues the “woman’s life being changed by a man” thread.

Exhibit C: The scene at the club in the second episode, Brooklyn Heights. With the drug dealer. Offering Cat a drink. They really want us to suspend disbelief that far? That the cop who took down a stalker terrifying a whole city is dumb enough not to act as though she were drinking, that she’s unprepared enough to accept the glass in the first place? Of course she has to play along to some degree in order to maintain their cover, but if she’s as shrewd as we’re being led to believe, then how can she not have a Plan B? And then, the rest of the scene is just cringe-worthy. Cat fumbling through the arrest, Leo having to chase the drug dealer, Cat turning on the full female-shrieking mode when she hallucinates squashing a bug on her arm. What kind of a message is that? That that kind of woman lurks inside of every tomboy, just waiting to be lured out by means of drugs? All in all, it’s ridiculous. It’s like the writers went, “Let’s get Cat high on something!1!” during meetings and just went with it, to hell with her characterisation and whether the scene fits into the episode at all. Spoiler alert: it doesn’t. 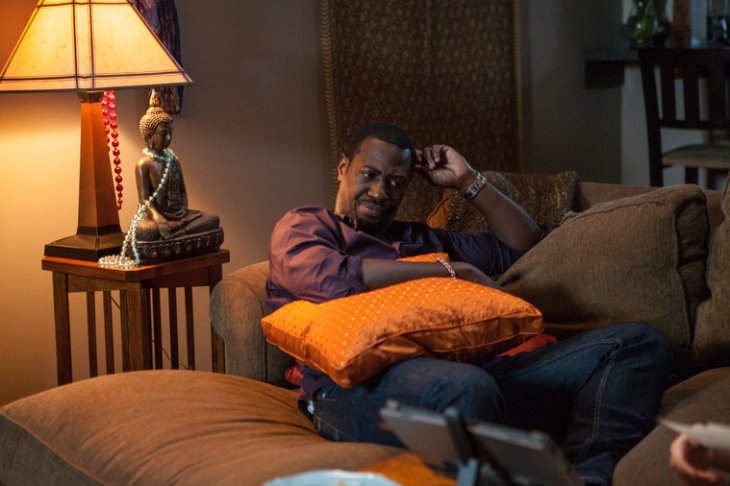 Exhibit D: The two things that infuriate me the most are the moment when Cat gets Captain Baker to drop the conversation by talking about her period and tampons and he goes, “Ok, no more women talk!!” Are you shitting me? Perpetuating the trope that, oh no, the poor delicate sensibilities of men, they don’t want to hear about your lady problems? Wow, they’re just throwing the tropes around here, aren’t they. I don’t know who’s written the coming episodes, but so far, ironically, the writers have been men only. Funny. By which I mean, laughable. And it shows, too. Instead of subverting tropes by letting the Captain take it in his stride and just keep asking Cat whether she’s still bleeding from her nethers and coming back to the precinct, oh no. They pull the men can’t deal with periods part. The Captain is, far as I can tell, married. Maybe he’s got a couple of kids, maybe he grew up with a sister or two. He knows about periods, you douchecanoes, and I am so, so tired of seeing that part of my life being treated like a disease and something yucky and oh no, the poor boys don’t wanna hear about that. So, so tired.

The other thing is the thing with Cat failing the driving test three times. Like, what? It just makes it sound like she’s a dumb girl who doesn’t know how to park, when probably her problem is reckless driving. Well, guess what: Leo can be a terribly reckless driver, as he demonstrates to Cat in the second episode. Funnily enough, he can also drive like any normally trained driver and without losing his license. So, men can shift gears and adapt to the environment they’re in, but women can’t? Or at least Cat can? Come on. We’re constantly being told about how great she is, famous even, with the story of the terrifying stalker being used as a narrative shortcut. But then we’re also supposed to buy into and laugh about this? Hell no.

Also because, you know: Leo is great. He balances Cat out, he wants to help her, and he calls her out on bullshit. So I wanna see that partnership grow, I wanna see him become her partner in the sense that she doesn’t resent him for having to be driven around by him, but actually trusts him more than the cops who can’t be arsed to put up with her.

Cat and Leo run from her ex-husband during the pilot episode.

One more thing, aka Exhibit E: Cat telling Leo not to talk with his mouth full like that? Yeah, that’s hella dodgy coming from a white woman to a man of colour. Again, inconsistent writing for laughs. She could have just smacked him on the shoulder or raised an eyebrow after saying, “I have no idea what you just said,” but no, she scolds him like a child. Like an uncivilised child. You realise where I’m going with this? There’s no need to teach him manners. But that’s what Cat does, and it’s supposed to be funny. Guess what, it isn’t.

Oh and another thing: Leo keeps asking Cat why she married Gregg. Yeah, I’ve been asking myself that, too. There seems to be absolutely no way that these two ever thought themselves in love. Another plot element that seems to be there just for drama, not for actual narrative drive or, y’know, credibility.

I’ll keep watching the show because when I’m not cringing, I’m actually enjoying the chemistry between Cat and Leo, I enjoy the diversity of the supporting cast, and I do wanna know what happened to her father, preferably so we can get this over with and move on to more exciting stuff. Because that’s where I’m hoping Taxi Brooklyn really isn’t going to try to be Castle — I don’t think I can take a second go-around of a parent’s murder and its resolution being dragged on for six seasons.