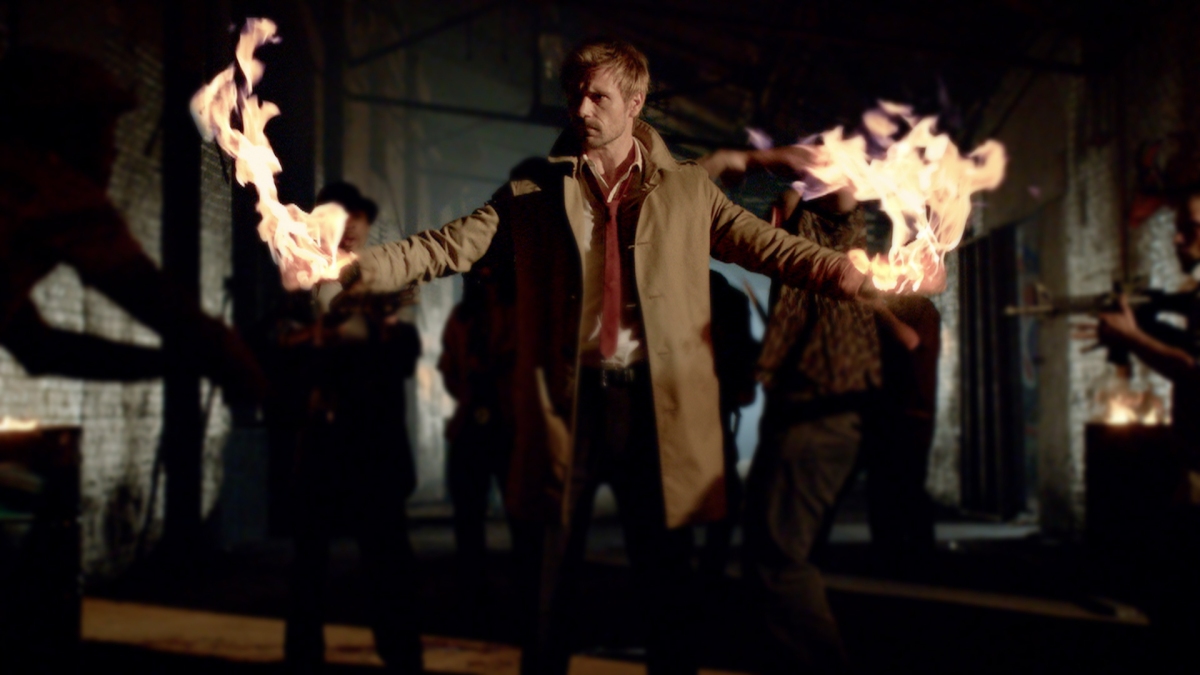 Wanna know why? Because the show is going to blatantly and nonsensically erase one of the few canonically bisexual characters pop culture possesses. Because the writers saw fit to exchange one lead original female character for another because they weren’t capable of writing her better — and instead of improving on themselves, they blame the character, terminate the actress’ contract and hire a new one for a different character already existing in canon. And because John Constantine actor Matt Ryan think it’s totally cool to let slip that having John hook up with the new gal might be a lot easier.

That’s why. More under the cut, if you haven’t facepalmed enough yet.

When MTV calls you out on bullshit, you have to realise you’re in trouble. In this piece on mtv.com, Kevin P Sullivan calls the NBC show’s producers out on their bi-erasure. Here’s a quote from the original interview on Inside TV @ EW.com:

“In those comic books, John Constantine aged in real time,” he said. “Within this tome of three decades [of comics] there might have been one or two issues where he’s seen getting out of bed with a man. So [maybe] 20 years from now? But there are no immediate plans.”

… what? Let me get this right: he’s not bi enough for you? That’s like John Barrowman auditioning for the lead role on Will & Grace and not getting it because the producers and casting directors found him too straight. (I’m not making this up.) So at what point does being queer become something that can’t be ignored? If he hopped out of bed with a man every five issues? Every other issue? Like, you want to be “truthful” to his smoking habit, but you pass up on this fantastic opportunity to give bisexual heroes and heroines representation because… the stats aren’t right?

Or is it because you’re just too damn lazy to pull your head out of your ass?

And then, another thing happened. Well, three things.

When in Doubt: Blame the Female Character You Yourself Created for Your Own Shortcomings as a Writer

First, it was announced that Lucy Griffiths would leave the show. She had previously played originally created character Liv, the young woman capable of seeing demons and being pulled into John’s crazy life in the heretofore aired pilot episode.

It was then announced that Angelica Celaya would not replace her as Liv, but was rather cast a canon character named Zed, a psychic already familiar with her powers when she meets John.

“She’s someone who can go toe-to-toe with John,” executive producer Daniel Cerone said. “She’s intuitive. She can detect bulls–t,” whereas Lucy Griffiths’ exiting alter ego Liv — one of the writers’ own inventions — was “very wide-eyed [and] reactive.”

Dear writers, you do realise that, Liv being your creation, you hamstrung yourself by not being able to write a better female character? You made her that way — and it was relatable! Because what character gets dragged into such a massive clusterfuck of demon-hunting life and just rolls with the punches? That’s how characters grow! They adapt, they push past their fears, they make their own decisions. By making this the character’s fault — which is what they’re doing by describing Liv in such naturalistic language: “she was” instead of, you know, “we made her that way because we didn’t know what we were doing” — they put off responsibility and think they have carte blanche to just reach into the character prop drawer and pull another one out to crash and burn. These female characters aren’t characters with drive and ambition and personality. They’re tools. They’re plot devices. They’re objects. If they wrote Liv in such a way that the narrative is so easily imaginable without her — they did a seriously bad job creating her. The nerve.

Although Liv still appears in the pilot, Goyer said that one scene from the episode will be reshot — and in sharing that, he perhaps let slip a bit of a spoiler when describing how Liv’s absence will be addressed going forward.

“[John’s] friends drop like flies,” Goyer said. “He is this classic noir character who often ends up alone, and we thought it was kind of consistent with the character.”

So what’s gonna happen is, Liv is probably gonna die. And “classic noir character” is just trope speak for massive man pain by lots of female skeletons in the proverbial closet (ha! closet!). So Liv is going to be fridged, and there ain’t jack shit we can do about it.

I think she’s (Zed) feisty. I think she’ll get a lot more in John’s face and challenge John a little bit more. I think John’s the type of person that feels he can easily manipulate anyone. When there’s someone who comes along who can take him up on his sh*t, he kind of likes that. There’s the possibility of a sexual chemistry there as well. He likes this person because she can give it back to him. I think that makes an interesting dynamic for the show and the episodes that they’re not always going to agree with each other. She’s not just going to follow him around. She’s a leader as well.”

So what he’s saying is that it’s much likelier that the two will hook up. Because, clearly, that’s the objective when placing a man and a woman in a narrative alongside each other. Gotta watch that romance angle.

It’s not even like they’re adding another character because they felt they wanted some more variation. They didn’t think it would be possible to improve on their own writing to give Liv the character development they felt was needed and give her more than a handful of personality traits over the course of a few episodes/a season arc. Nah. They had to reboot and kill her off and substitute a new character who is going to be put into a tight-sealed box just as much as she was.

They’re using female characters as props. Not as people with potential. And they’re admitting that they can’t write for shit.