Previously on Doctor Who: Deep Breath.

And down the rabbit hole we go — or, rather, down the eyestalk. This is a game of Alice in Wonderland that even the Doctor hasn’t played before.

This episode’s a bit of a mad hatter, and I’d imagine that opinions are probably divided as to whether it’s any good, but after reading some spoiler-free reviews online I was expecting more Curse of the Black Spot and less Dalek. But I liked it, I really rather did. (There’s also a lovely pun in there, if someone wants to pick that off. You know, someone getting into your being called a shrink. The Doctor being shrunk to miniature size to get into the Dalek’s head. No takers..? Oh fine.) It’s a bit of a replay of Dalek in the sense that this time it’s radiation poisoning the Dalek (rather than it absorbing part of Rose’s DNA). Where Rose’s humanity taught the Dalek mercy, which made it want to self-destruct out of shame after sparing her lfie, the Doctor’s head makes it want to kill all other Daleks, despite his best intentions.

The Doctor, Divinity, and Being a Good Dalek

A lot of people in fandom got worked up about the bit in the trailer where the Dalek tells the Doctor that he sees beauty and divinity in him. Of course, that prompted outrage in the sense that the Doctor has said numerous times that he’d make a bad god, a vengeful god, and that he shouldn’t ever be seen as divine, or assume himself to be. Out of context, that line has led many to believe that it was to be taken at face value and that the show was somehow changing its tune of 50 years. What’s actually happening in this scene is, the Dalek may have been looking into the Doctor’s mind, but at first it doesn’t mean the Doctor himself. It means the Universe, the stars, the planets, the life thrumming through the void, filling it with beauty and every living thing. When the Doctor looks at the Universe, he sees endless perfection. And he’s teaching it to the Dalek, his perspective, his point of view. The Doctor isn’t divinity. The Universe is, and it’s why he loves it. And now he’s showing a Dalek that love. The Doctor lives his love for the Universe, his soul is filled by it.

But then there’s the other thing: for fifty years, we’ve been taught that the Daleks take everything to extremes. Be it hatred, be it racism, be it revenge. And so does this Dalek when it’s faced with the other end of the spectrum — it sees divinity in the Universe because it’s turning its obsessiveness and lunacy to the birth of a star; and do you know why else it sees divinity in the Doctor, why that picture suddenly changes, why the memories it’s seeing change? Because of his hatred for the Daleks, because of the blood sticking to his hands, because of the killing that has happened at his hands and in his name. The Dalek is showing what Mme de Pompadour once showed Ten: a door into one’s mind opens both ways, and the Dalek sees into the Doctor’s mind and soul, and it sees destruction and hatred and violence. It’s what the Dalek in Dalek taunted Nine with, telling him he’d make a good Dalek, it’s what the Daleks disgusted Eleven with in The Asylum of the Daleks: they called him beautiful, they told him that perhaps that’s why they never managed to kill him, because of their appreciation for the death following him in his wake. The Daleks’ concept of beauty is blood, anger, and revenge, and it is part of the Doctor’s soul, no matter how hard he’s fought to prove otherwise. The Doctor wants to be a good man, he wants Clara to tell him whether he is before he enters the Dalek, because he knows in his hearts that he will not leave it alive if he isn’t. And now, the Dalek is harnessing the Doctor’s hatred of the Daleks to go on the rampage against its own kind. The Doctor wanted to make it peaceful, to show it the beauty of life and the Universe, but the Dalek got stuck on killing again — just the other way around this time. It’s still a killing machine, it’s still evil. The Doctor was right. But he’s definitely not pleased once they’re done.

And so now, when the Doctor says, “Of course they are [exterminated]. That’s what you do, isn’t it?” he knows that he means himself as well as the Dalek. If he and the Dalek are one in this moment, then it’s both of them. And exterminating is what they do.

And that is why it sees divinity in the Doctor. Because Daleks are assholes and the Doctor can’t be sure who he is right now, who he has been. And it looks like Nine’s worst fear, all the way from Series 1, has come true. And that is what we learnt today. 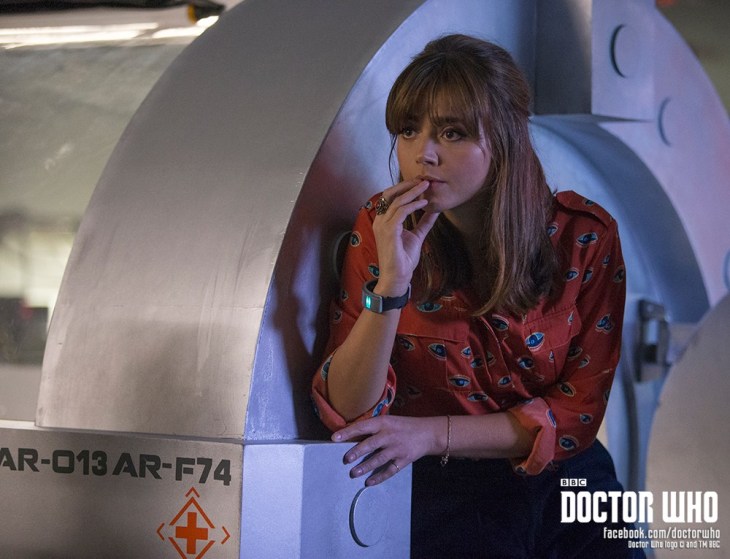 Clara Oswald Continues to be Awesome

I love Clara in this episode, I love her so much. She figures it out, she challenges the Doctor into figuring it out himself, that a good Dalek is possible because, hell, they’re in one. The Doctor calls her “teach,” he gets full marks, he gets a slap across the face when he’s being a cold-hearted, prejudiced jerk. She doesn’t take any of his crap, and you can already see how much he adores her for it. Clara is brave — she shows her fear, is not ashamed of it, but pushes past it time and time again — and she’s smart as a whip, quick-thinking on her feet, and she’s a teacher. It’s why I find Twelve’s love for chalk and the schoolboard he has in the console room in the TARDIS so cute: he got that from her. She’s a teacher, and she doesn’t just love guiding people while they learn, she loves learning herself. She lights up at the realisation that what she’s doing up in the Dalek brain is working, that the electromagnetic impulses are doing what they should. She’s learnt something, and she’s loving it. She retains information, recalls what the Doctor said, and applies those clues to a completely new situation and gets through it. The Doctor trusts her to go mucking about in there, and she doesn’t need him looking over her shoulder.

He can be callous, but he teases her with warmth, and he’s capable of admitting to her that he’s terrified, that he needs her. He asks for help and he does it without flourish, without drama. He just says it, doesn’t hide. And that, in a Doctor who we’ve seen incapable of admitting that he needs someone, who we’ve seen hiding under masks and silly facades, is infinitely powerful character stuff. There’s constant give and take between them, the two balancing each other out, and the acting by Peter Capaldi and Jenna Coleman is spot on. And Clara, oh Clara. She lives her life, refuses to be consumed by life on the TARDIS, but she embraces both worlds wholeheartedly.  She has a date and she makes it back in time, right after climbing into a Dalek’s memory banks. 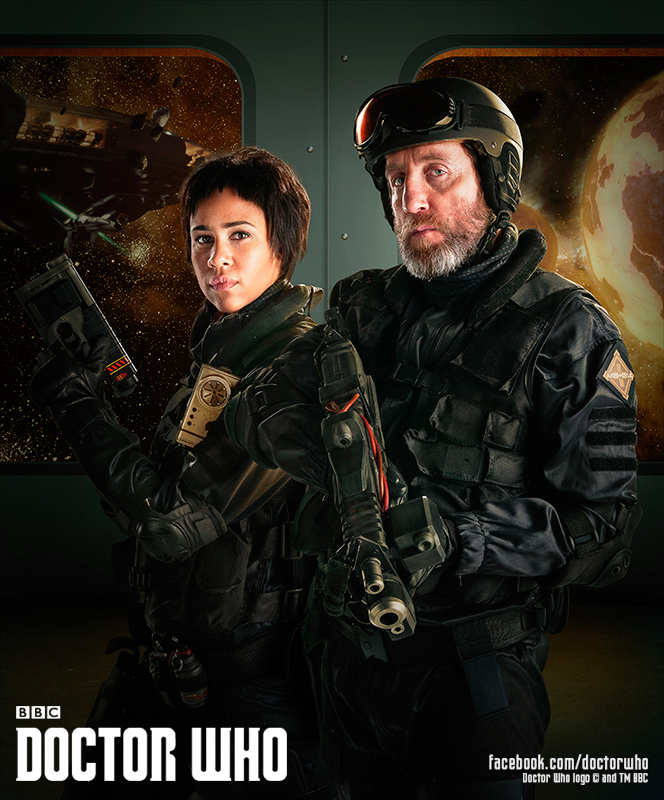 This episode introduces us to Danny Pink, and in a sort of rapid fire exposition sequence, we are told the insta-facts about his life: soldier, Maths teacher, conflicted, haunted by something he did or that happened to him, gets flustered when being asked out on a possible date. I liked that that bit was played for humour and not really anguish, and that it wasn’t drawn out too long, and that Clara just decided to give it another go because she could probably see his nerves. It’s a good bit for kids, too — it’s ok to get nervous, to get flustered, and you’re not mocked for it because everyone knows just how that feels, whether you’re a teen or an adult. The one bit where Clara’s hella insenstitive, though: the thing about soldiers having more than one dimension, and Clara quipping, “Oh, so you shoot people and then cry about it.” Even though she wasn’t referencing the crying incident — she would not have said that he she heard about it, I think — saying that to a former soldier is probably a bad idea, even meant as a joke. It’s an interesting flaw for Clara to have: to be compassionate and kind on the one hand, but to have a sense of humour that doesn’t always reflect that, and to put her foot in her mouth trying to be funny (and failing).

What else I loved: many, many female soldiers among the ranks, first and foremost Journey and Gretchen. Gretchen (guest star Laura Dos Santos), who steps inside a Dalek and chooses to sacrifice herself so the others can live, chooses to do something that’s worth dying if it can help save the Aristotle and maybe even win the battle or the war, chooses to die on her terms, who makes the Doctor promise to make her legacy known. Do something good, name it after her. Journey (guest star Zawe Ashton), who’s a soldier and serving with her uncle (guest star Michael Smiley), but not once subsumed into those categories, who’s afraid and willing to do what has to be done, but is willing to risk it all by thinking outside the box. She understands why the Doctor cannot surround himself with soldiers on a daily basis, but she wants to join him, wants to help, and I think Journey Blue is going to find different ways of achieving that. Her own way.

The one thing I don’t know, though: how on earth did their mini-mes get back to normal size outside of the Dalek??

Next on Doctor Who: Robots of Sherwood, featuring Da Vinci’s Demons Tom Riley, with a dead ferret resembling a beard stuck to his chin.