Previously on Doctor Who: Into the Dalek.

Robot of Sherwood is a romp, a sassfest, and in the line-up of recent new-Who episodes, perhaps a bit of an odd duck reaching back to the Doctor meeting funny folk from history and fiction in the olden days. The only thing we’re missing, perhaps, is the lizard. Wasn’t there supposed to be a lizard? (→ Blink)

In summary: I’ve just seen the Doctor flip Robin Hood the bird, I don’t care what else happens this weekend.

As to the impossibility of it all: in this tale, Robin Hood did exist, a man who then becomes subsumed into folklore and becomes a legend, which is, of course, a trick that you can’t use too often, but if a few dreams of the Doctor meeting fun fictional characters can come true for the audience, especially the kids, I think it’s very much fair game. There’s always historians and literary scientists poking and prodding stories and folk tales and records for the truth that there is in legends, so I’m totally here for the Doctor finding a few here and there. (After all, Jenny and Vastra are what served as inspiration for Arthur Conan Doyle to start writing about Holmes and Watson.)

Penned by Mark Gatiss (and guest starring his husband Ian Hallard as Allan-a-Dale), Robot of Sherwood manages to strike a decent balance between silly, sinister, and a few heartfelt moments. Peter Capaldi plays his Doctor as many things, here. Great comedic timing, prone to outbursts of ego, stubbornness in the face of Robin Hood’s very real glued-on dead ferret beard, massively improved sword-spoon-fighting technique, cheating at archery, and impatience with laughing people, arrow shooting competitions, and Robin’s general existence. His slight bewilderment at Clara’s excitement in the beginning is a party in micro-expressions, and I enjoyed watching him just do stuff with his face every scene he’s in. That, and he thwacked Robin on his bum with the spoon. Definite bonus points for that.

And Clara — Clara is the real ringleader. And anyone who’s surprised should not be, because when you get two idiots with massive egos trapped in a dungeon and making asses of themselves whilst manacled together, it’s up to Clara to get them to, well. Shut it already.

Clara’s also the one who actually turns the tables during interrogations — because it’s her doing the interrogating. She plays the Sheriff by manipulating him into believing she’s already got the same information he has, and she’s goading him into it by using history and her own sex against him — more accurately, history being written by white men.

With that one line, Mark Gatiss gives us so much. Because great men always take what they want with no regard for consequences. Because great men believe themselves so superior that they cannot fathom being deceived by a woman is even possible. Because great men are so easily turned on their heads. This is Black Widow putting one over on Loki 101. And they always fall for it. Every king needs a consort, my arse. A queen doesn’t need a king. 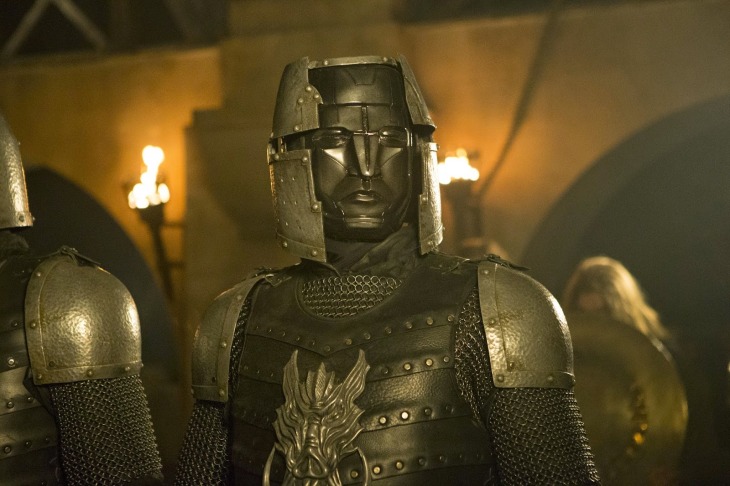 Jenna Coleman describes Ben Miller (Death in Paradise) as a “smarmy Sheriff [of Nottingham], but underneath you could see him kind of calculating. And, also, definite anger management issues.” I liked him as the villain — a bit nondescript still, perhaps, but maybe that’s because I’ve seen quite a few Sheriffs of Nottingham in my time. He doesn’t get that much to do, besides looking menacing in all that black leather and having a bit of a power complex and an axe to grind with Prince John. The robots don’t even really get to talk, except for being meanies and wanting all the gold in the land to fix their engines. The Sheriff didn’t really believe they’d take him to London, did he? They were going to the Promised Land, just like the Clockwork Men from Deep Breath — and one wonders. No Kitty serving tea at the end of this one, however.

In the end, the episode is also about the Doctor grappling with the fact that, to many, he is a hero.  And what Robin is saying, effectively, is that if Clara believes in them both, they had better not disappoint her. His last line also harkens back to something an Ood once said: the song is ending, but the story never ends. The Eleventh Doctor asks little Amy to make the story of her raggedy Doctor a good one, eh. And that’s just it: the Doctor’s a story to many, told for generations on the planets he’s once visited. And most of the time, when it’s not little Cybermen being tucked in with a bedtime story, he’s a story of hope. Of good deeds done and lives saved — he doesn’t see it that way. He’s made so many mistakes, and he believes it’s time that he faced the music. But still, the people he meets are determined to remind him that he can be a good man.

What I’m not convinced of: the twist with Marian at the end. “I left him a present” — uh, Doctor, really? Marian’s a person, not a present, and for real: if Marian was down in the Sheriff’s dungeons, why didn’t Robin try to break her out? Why was he sad in the first place, did he think she was dead? Why don’t we learn her name sooner? (Or did I miss her name being mentioned at the beginning? I’m honestly not sure.) And why was Marian captured, she was supposed to have the political influence to keep that from happening. Making her a peasant, using her as a source of manpain and then giving her back to Robin is a bit cheap, Mark.

All in all, a good filler tale that still contributes a little to the story arc overall, and one that can definitely be included in a rewatch of romp episodes. The next one, Listen, seems to continue in the tradition of Night Terrors, giving us creepy things scaring children (and pretty much everyone else), things whispering to you in the dark, from underneath your bed. Bring it on.

Next on Doctor Who: Listen.