Previously on Doctor Who: Listen.

The Doctor goes classic hustle in this outer space adventure. Doctor Who has always brushed up against other genres and subgenres, and there’s been plenty of breaking and entering, but in new-Who, this is a first, and it’s clear that writers, directors, and costume and set designers alike relished the opportunity to evoke some of the coolest moments of breaking the bank in film and on television.

I mean, come on. The suits, the leather, Clara’s very conveniently very fitting date night outfit (which, hello, closet cosplay, here I come), the walk into the bank in formation, slow motion, and to cool music? That’s classic grifter, and I love it. Doctor Who gets to do the running down the corridor shots more than they do anything else, so to have the show pay homage to a completely different genre within the realm of its own world is brilliant, and it shows how much the crew must have loved working on this outer-space Fort Knox caper. 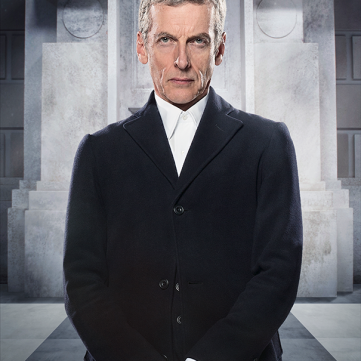 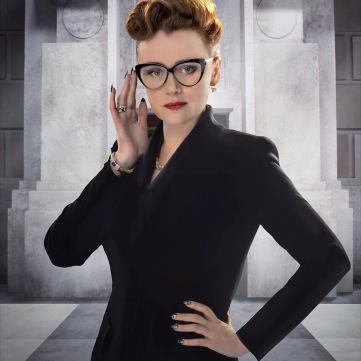 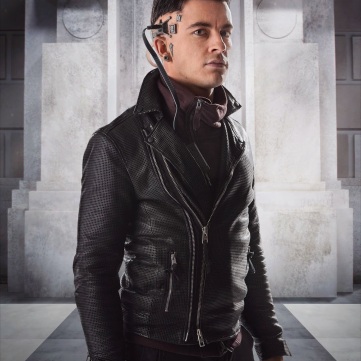 And then, into the middle of all this, walks a very alien-looking alien, the Teller, a rather punny name considering his role in the bank and his ability to detect guilt and criminal intent. But this time, it got something wrong, and Team Not Dead is free to enter.

They’ve all agreed to this — the Architect (which reminds me briefly of a villain of the week on White Collar calling himself that — also a fan of robbing banks) has promised them something — what kind of incentive could there be for the Doctor and Clara to do this, apart from the other not being violently killed at the time of kidnapping? They had their memories wiped to get past the first line of security, the Teller, but after that they’re on their own. So if their memories are gone, they also don’t remember what in the Universe they want most is in that vault.

For the two guest stars on the team, Psi (Jonathan Bailey) and Saibra (Pippa Bennett-Warner), their characterisation revolves around identity. Saibra, who’s a mutant human, can change her appearance into anyone she touches, including memory worms, which is not only a mite unfortunate but also suggests that it’s not strictly deliberate for her, and not something she can entirely control except by wearing gloves. She therefore acts as a sort of mirror for the Doctor — if you can change your face, but you can’t entirely control it, then who are you? Saibra’s alone because no-one can touch her. If they do, they see themselves — touch is by no means the most important, but an important part of human connection for many. And Saibra can’t forge those connections the last step of the way, because once she does, they’re not with her anymore. They’re with a reflection of themselves. They see her change, and she feels herself change, feels herself being subsumed. Any expression of feeling would not be entirely her own anymore. She’s uncomfortable with it herself, and others likely recoil. The Doctor sees her abilities and calls them a gift, but to her, they’re not.

Would you trust someone who looked back at you out of your own eyes?

For Psi, identity is removed in a different way. As an augmented human, half computer, he’s capable of wiping his memory bank — very handy for a bank job, but destructive to his own self. When interrogated in prison, he panicked and, presumably in an effort to protect his loved ones, he deleted his own memories of them so he wouldn’t be able to reveal anything, not even under torture. And now, he only knows that he did it, but even he can’t be sure about the why. And without those memories, there’s no-one in his own head but himself. No-one to bounce memories back off of, no-one to tell him who he is. It shows how human memory also serves to constitute our own identity, and how much of that depends on the characterisation feedback we receive from others, the same way Saibra feels it is for her. But it’s not just that — it’s about feeling loved, about knowing that someone out there cares about you. Psi is alone in his head now, and he’s not sure whether to trust those memory banks he has left, and what kind of life that is if he’s got no-one to turn to. Or, at least, no-one he can remember. 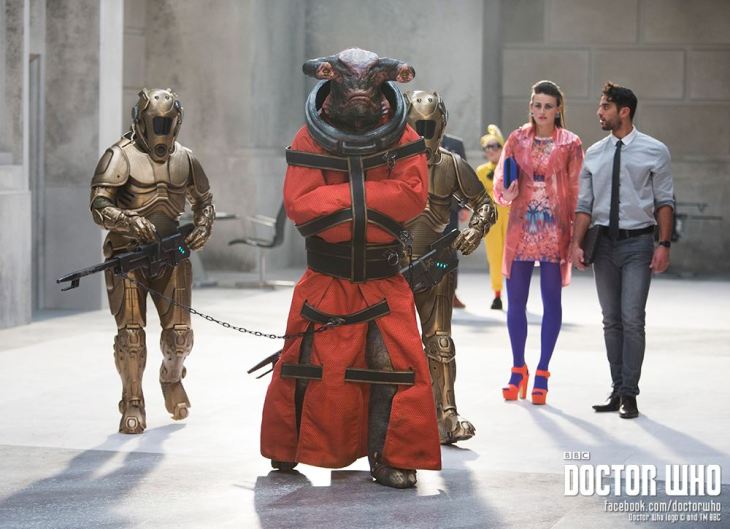 Keeley Hawes does an exceptional and fun job as Ms Delphox, the very chipper head of bank security — and, in a quirky twist, the Director of Karabraxos.

I rolled my eyes at Saibra dying first via exit strategy — the Doctor administering said exit strategy is another notch in the darkness bedpost, but we know who always dies first in horror movies. We didn’t need her death to up the stakes for the team, they’d already seen someone’s brain turned into soup. Saibra deserved more than her ten lines and a bit of tragic backstory. Psi clearly thinks so, too. What Psi gets, then, is to sacrifice himself to save Clara when she fails to keep her mind blank. It’s just not something humans are capable of doing. 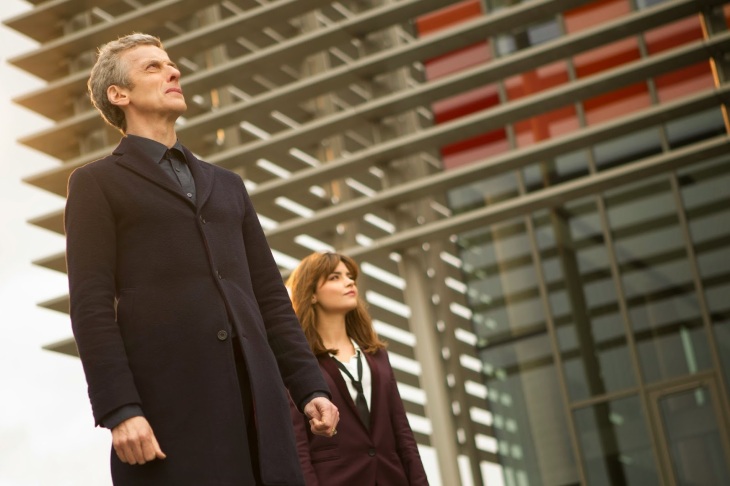 And, yes, I’m still mad even though I hoped at the time of it happening that it wasn’t poison or a death ray, but a teleport. After all, that bomb scattered the remains of the explosion in another dimension and then brought them back in place, so that was foreshadowing. I was reasonably sure that the exit strategy would do the same, especially since the visual effects looked exactly like the sort the show has used before to display teleportation. Granted, it was a long shot and cheating death on this show feels a lot like being conned as an audience — but that’s exactly what this episode is. It’s a long con, and nothing is what it seems. In a grifter movie, the ones who really end up conned are the audiences, because there’s always something at play from the very beginning that we don’t see until the very end. And that’s the joy of it. Emotional manipulation via character death is not something I like, but at least we got them back — and they get what they came for.

Psi: “Clara. For what it’s worth, and it might not be worth much. When your whole life flashes in front of you, you see people you love. And people missing you. And I see no-one.”

It’s not all fun and games with this Doctor, and we’re not here to make all his character flaws ok because he’s saved the Universe once or twice. He grieves for Saibra, he does, but instead of harnessing that pain the way Ten and Eleven, to a point even Nine, would have done, he takes the high road and establishes priorities. Practical, detached.

Psi: “It’s obvious you’ve been with him for a while.”
Clara: “Why?”
Psi: “Because you are really good at the excuses.”

Now… what is it that the Doctor and Clara agreed to do the job for? To save the life. And a Fabergé egg. And that’s how the Doctor knows. Madam Karabraxos might have called him to ask to right that one wrong she committed by forcing the Teller into her services by incarcerating its mate, but she’s not the Architect. He is. And how does he know? Because there’s only one creature in the whole Universe he really hates. And that’s the long con. Complete with flashback reveal of the entire thing playing out. Sting movies do as sting movies are. Love it. If you know the genre, you wait for it and you see it coming, but you watch these stories because you love them for it, not in spite of that.

But why? To help. To rescue the last of their species. And that’s why the Doctor tries to be a good man. Because he wouldn’t break into a bank for personal gain, or for something he wants to himself — nor would the people he chose. Saibra and Psi, he chose them because he knew their motives wouldn’t really be selfish. They just want something to find their own identities, and he’s happy to help. That’s what he and Clara want. The thing they want most in the Universe — is to help. (Why, exactly, is the other last of the species a she? It’s not like they’ve got any visible primary or secondary sexual organs…) 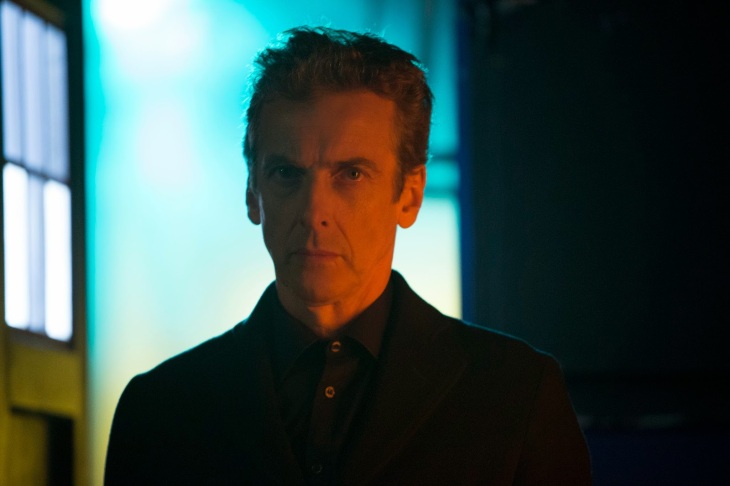 Ooh, but did you see in the line-up of criminals that Psi projects onto the wall then the Teller has found Clara: not only do we see the Gunslinger from A Town Called Mercy, a Slitheen, a few blokes that look like they come straight out of the FBI Public Enemy files from 1931, and the Ice Warrior from Cold War, there’s a shout-out to Torchwood, in the shape of Captain John Hart (James Marsters), Time Agency pal of Captain Jack Harkness. Oh, I’ve missed your face.

And in the end, they’re in the TARDIS, eating Chinese take-away, and the Doctor is regaling them with a story about the Borgias and the leaning tower of Pisa. He asks Psi to call, too, and he grudgingly accepts the hug from Saibra. Yep, that’s it. The Doctor’s got pals. Building a small family around the galaxy.

I just love their dynamic to bits, and I really loved this episode. It’s well-paced, it twists and it turns, and it’s got a crowning moment of heartwarming to top it off. It’s an exploration of character as well as human identity — and just a really enjoyable ride.

Now, if you’ll excuse me, I think I might have to rewatch Ocean’s Eleven.

Next on Doctor Who: The Caretaker.

P.S.: Please, please stop with the make-up and heels jokes. It’s just not funny, and the Doctor’s not that clueless, and they could have picked literally anything else for him to gripe about.