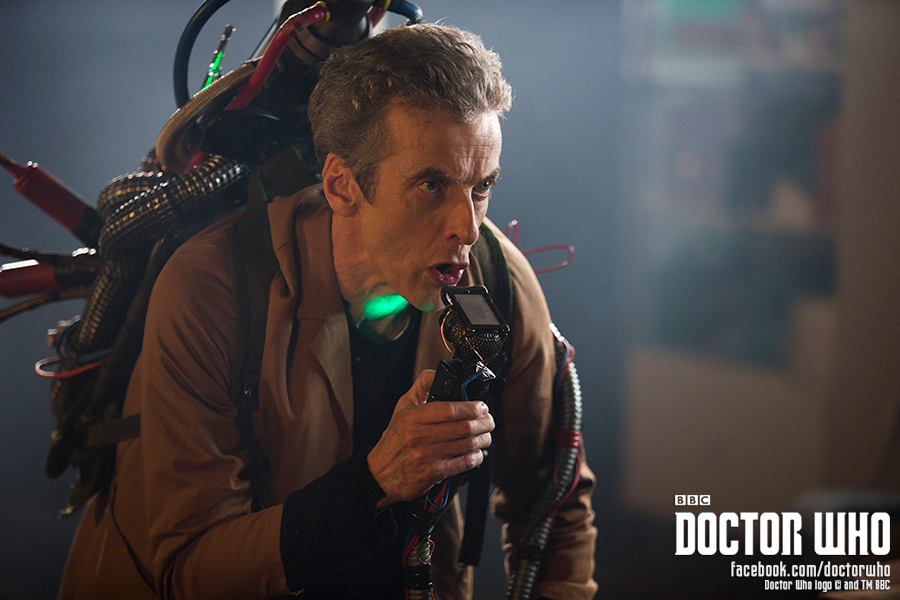 Previously on Doctor Who: Time Heist.

There’s a fine line between the Doctor acting as gatekeeper to Clara’s love life and just being concerned for her wellfare and Clara herself wanting the Doctor to like her boyfriend simply because people like it when their friends and their significant others get along. This episode is dangerously skirting that line and, frankly, introducing an Eleventh Doctor Doppelgänger and letting the Doctor believe that he is the SO, then leading to instant approval… is not the way to go. At best, it’s a really, really flat joke.

In television, we posit that everything happens for a reason — so there must be a character motivation behind this. Is the rationale to show that the Doctor still has feelings for Clara? I don’t think so, but then surely the only reason can be that a) the Doctor doesn’t hate anyone in the Universe as much as himself and that he b) also doesn’t fancy anyone in the Universe as much as, well, himself. So, clearly, the one guy he’d immediately approve of would be one that looked like himself. But why? Does he find it endearing that Clara apparently projected her feelings for him onto someone else? Does he find it endearing that she subconsciously did fancy him all that time, and that she couldn’t move on? I wouldn’t call that endearing, I’d call that unhealthy.

And what’s with the unsanctioned dislike of PE teachers and assuming that Danny only teaches Maths to help out, not because that’s his actual field of study? Twelve really, really has a problem with soldiers.

“You’ve explained me to him. You haven’t explained him to me.”

What’s that cold, angry face for, you idiot? Clara doesn’t owe the Doctor an explanation why her boyfriend is the Maths-teaching squaddie and not the bow-tie wearing blatherer, and I’m cringing a bit at some of the over-the-top drama. I really want to believe that this isn’t about the Doctor’s feelings for Clara, but rather about his intense dislike for soldiers — and where did he get that? He just… turned out that way. The Doctor uses soldiers when he needs them, and then tells Journey she can’t come along — perhaps because the Doctor feels that, for ages, companions have been his soldiers.

Martha. When the Doctor and Donna meet Martha again in The Sontaran Stratagem, Donna says something along the lines of, That’s what we become when we stop travelling with you? Those that don’t die, you turn them into soldiers?

And he doesn’t want them with Clara, either. Thing is: that’s none of his bloody business. When Danny finally meets the Doctor, it’s a really big shock. That part of her life that Clara had always seemed to keep hidden from him — it’s an alien who looks and sounds like a Scottish caretaker, used to look like Adrian, and a blue box that’s bigger on the inside than the outside. And he asks Clara the question Clara has been studiously not asking herself all this time: if she doesn’t know who exactly the Doctor is anymore — then why is she still travelling with him?

“Because he’s amazing. Because I see wonders.”

“It’s funny, you only really know what someone thinks of you when you know what lies they’ve told you. You say you’ve seen wonders, you’ve seen amazing things, and… you kept them secret. From me. So what do you think of me, Clara? When you’re with him?”

And then Danny goes and deliberately riles the Doctor up because, guess what, he’s jealous, of course he is. What a complete and utter mess. The Doctor is infuriated at someone referring to him as an officer, and Danny’s smug at revealing what he thinks is the real Doctor to Clara. Clara, meanwhile, is just heartbroken over two grown men being complete idiots.

But then, Clara and Danny both run out of the parent-teacher conference to help the Doctor when the dangerous alien thing, the Skovox Blitzer, reappears — except, of course, the Doctor wants him out of the way. The Doctor’s so stuck on reducing soldiers to them following orders and also thinking that Danny wouldn’t be willing to put his life on the line for Clara that he didn’t consider what Danny would do. Namely, put the watch to good use and help save the planet from the self-destruct. Also, impressive acrobatics to boot. Danny defied orders, he had Clara’s back, literally, and he figured out how to help within seconds of the Doctor panicking.

“I need to be good enough for you. That’s why he’s angry, just in case I’m not.”

There. Gatekeeper, right there. It’s not up to the Doctor to decide whether Danny is good enough for her, it’s up to Clara. Especially with Danny’s assumption that he’s her dad, there’s this utterly outdated notion of the father approving his daughter’s suitors floating around, and it’s ridiculous. The underlying message of approving of Adrian is clearly that, hehe, only the Doctor is good enough for Clara. Or at least a look-alike. But that’s not how this works, and it’s sending some really mixed signals about his feelings for her, even after Capaldi said numerous times that he didn’t want any Papa & Nicole moments. Worrying is fine, sizing Danny up is fine, it’s what all parents and friends with an over-protective streak do, but: I really could have done without all that yelling and the posturing. And I really wanted Clara to slap him again. Because getting angry and nearly succeeding in breaking the two up is not how you do it. (Take a leaf out of Rupert Giles’ book, Doctor, really.) What Danny says to Clara in the penultimate scene is fantastic, though. He doesn’t judge, he doesn’t presume to tell Clara what she should do. The only thing he asks is that she’s honest with him about the Doctor pushing her too far. The Doctor may not want to be a CO, but Danny recognises the kind of personality that some COs have. They push you, and they bring out the best in you, maybe, and they incite bravery in you that lets you do remarkable things. But he also sees a trust in Clara that means she wasn’t scared this time — which is a bit out of character because so far, Clara’s theme has been to be scared and then push past it, so it’s slightly disingenuous of the writers to insert that line here only to let Danny prove his point. Nevertheless, he says that one day, that trust may lead her too far. And it’s not about him not trusting Clara to realise that for herself, because he knows she will. But when it happens, and when she realises, he wants her to tell him so he can help her. He knows what it’s like, he’s done things during the war that still haunt him. He doesn’t want her to go through that, and he knows how to deal with it. So, all he wants, is to help. That’s the only promise he wants her to make, to be honest with him from now on, especially about that, because he wants to help her, wants her to know that she’s not alone. And that’s fair. Look at that, a companion having a) a functioning home life and b) a healthy support system.

Chris Addison! So good to see you. He’s got a guest spot in the finale, too. His character’s name is Seb, apparently, and Missy really has no use for police men who died in a case related to the Doctor, but didn’t actually meet him. The Promised Land, the Nethersphere… different approaches to afterlife, I like it.

Next on Doctor Who: Kill the Moon.