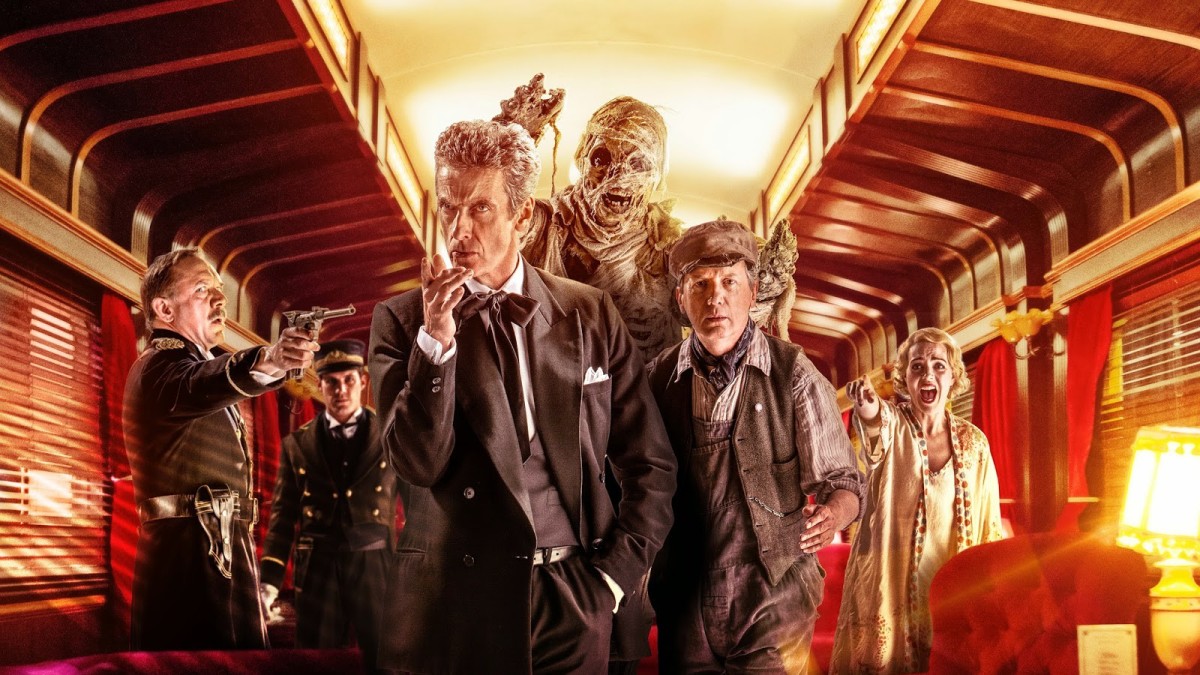 Previously on Doctor Who: Kill the Moon.

This episode affords us one of the luxuries of time travel: the recreation of period dress, set, and costume design — in the future, in space, making it feel endearingly fallen out of time. Donna went ‘flapper or slapper’ in Agatha Christie’s own time, now Clara is stepping onto the Orient Express. A marvel in its own right, of course, but also indelibly connected to, again, Christie. And we’re dealing with murder here, too — except that the perpetrator hails from a different world entirely.

I suppose the Doctor, in an effort to indulge and apologise to Clara after he disappointed her during their journey to the moon, promised Clara wonderful. He’s certainly trying to please her — and to charm her, in a way. He can be very charming, and his introduction before they enter the dining car very much suggests he’s out to impress. He’s also very successfully cosplaying the First Doctor, here.

Of course he’s pretending that it’s her feelings that are confusing, but it’s not that. It’s her decision to stop travelling with him that’s confusing him, and hurting him. In that moment, when she looks down, Jenna does a brilliant thing: she lets the mask slip, and we see Clara exhausted and sad and incredibly drawn. We can see how this ambivalence is taking so much energy, so much effort. She wants to enjoy it, she does, and it reminds her that this is what she always loved about travelling with him, Eleven and Twelve both. Going on the Orient Express in space. But enjoying something you love when you know it’s the last time you’re going to be doing it because what happened between you and the person you’re with is something you can’t come back from… it hurts.

I love these tiny little exchanges between them the most, when they’re both quiet and honest. I fully support Clara’s decision to take her leave from the TARDIS after what happened, but I also have so much love for Peter Capaldi’s Twelve in those small moments when there’s that warmth he lets you feel sometimes — when he’s not being a condescending prat, that is.

“I really thought I hated you, you know.”
“Well, thank god you kept that to yourself. [talks about planets]”
“I did. I did hate you. In fact, I hated you for weeks.”
“Good. Fine. I’m glad that we cleared that up. [talks more about planets]”
“I went to a concert once, can’t remember who it was. But d’you know what the singer said?”
“Well that would be a frankly astonishing guess if I did know.”
“She said, ‘Hatred is too strong an emotion to waste on someone that you don’t like.’ […] Look, what I’m trying to say is, I don’t hate you. I could never hate you. But I can’t do this anymore, not the way you do it.”
“Can I talk about the planets now?”
“Yes. Go.”

On paper, this looks really weird, but the way they act it… so much emotion, and it’s so desperately unspoken. Through those words, Clara realised that you can’t hate someone unless you love them — and that, if you do both hate and love them, your place is perhaps not with them, all the time. And that’s the thing — Clara meant, not all the time, not not ever again.

’cause Clara realises that, no. He’s probably not one to come ’round people’s houses for dinner. Both of these are magnificent scenes between them, because they don’t gloss over the rift between them, and they show that sometimes, it’s just not going to work out. At least, that’s what I thought. Because Clara does a 180 by the end of the episode, and I’m a bit ticked off.

I like Clara talking to Danny as she settles in for the night, and I like how he counsels her. He tells her that “dumping” sounds a bit like “scorched earth,” and that that’s not it, because she’s not leaving in anger, she’s just… moving on. And that would have been a great thing. In a TV landscape where most break-ups and separations, be it romantic or friendship, are horrible and hurtful and end in tears, this would have been a thing where someone decides to just… get off the train because it’s not working anymore. She was angry with him, yes, but that’s not even the main reason anymore. It’s the travelling she can’t take anymore, not him. But travelling is what defines him, is what she used to love doing with him, so you just have to let go sometimes. That would have just been a great thing to see. (See, when watching Doctor Who, I’m always thinking about what this teaches kids. And I think kids could do with an adult decision like this. Much like when Martha decided to leave to save herself the heartbreak.)

Knowing that he will soon have to cope without Clara, the Doctor is starting to talk to himself — literally. As in, asking and answering, but as two separate entities. Oh boy. The hithering and dithering in front of Clara’s door is telltale — he wants her with him when he investigates, but he knows she wants nothing to do with the danger, so he leaves her and vanishes around the corner just as Clara ducks out of her room to knock on his door. That leaves them separated for most of the episode.

In the tradition of Gerty and HAL,

GUS is the entity that brought everyone together on this trip. And, man, it’s an asshole.

Even though the Doctor views death itself in a clinical way, he does argue with Captain Quell to get off his arse and stop the “bodies piling up” in a way that suggests he cares. I love Frank Skinner as engineer Perkins, too, and his dynamic with the Doctor.

In the meantime, Clara’s stuck in the cargo hold with Maisie, and they end up talking about the Doctor. And that scene is when the trouble starts. Suddenly, Clara’s mind is very nearly changing before our eyes, all because Maisie doesn’t believe in goodbye to the good times. Ugh. At least Clara’s cognisant of the fact that talking about nothing but a bloke on one of the rare occasions when two birds get a scene together and actually interact is ridiculous, lampshading the Bechdel Test.

Of course, Clara’s back to being angry at the Doctor when she figures out that he knew that this was going to have to be dangerous, that he lied to her again, and that he made her lie to Maisie to get here to the lab so she could be the next observer whilst she died. Except, not quite. It was his plan all along to capture the surface of Maisie’s consciousness and inject it into his own head — because, well, he’s a Time Lord. A Time Lord has energy to expend for millennia. He’s the perfect target to keep the mummy in his sights for a lot longer than sixty-six seconds. He just couldn’t let GUS know that.

“I’m the Doctor and I will be your victim this evening. Are you my mummy?”

They just had to, didn’t they?

The ending… is a new beginning (and I’m mad)

Again, the way the mystery is solved seems a bit… quick. The Doctor talking very fast for 66 seconds, going out on a limb and following a hunch and using the magic words and relieving the soldier only for it to fall to dust… like, what, that’s it? The show’s certainly got it in for anti-climactic survivals at the moment. And then, the Doctor saves everyone and draws stuff in the sand while letting Clara sleep. (He must have carried her out of the TARDIS to put here there. Old grump.)

“So you were pretending? To be heartless.”
“Would you like to think that about me? Would that make it easier? I didn’t know if I could save her. I couldn’t save Quell, I couldn’t save Moorhouse, there was a good chance that she’d die, too. At which point I would have just moved on to the next, and the next, until I’d beat it. Sometimes, the only choices you have are bad ones. But you still have to choose.”

“Do you love it?”
“Love what?”
“I know it’s scary and difficult. But do you love being the man making the impossible choice?”
“Why would I?”
“Because it’s what you do. All day. Every day.”
“It’s my life.”
“It doesn’t have to be. Is it like…”
“Like what?”
“An addiction?”
“You can’t tell if something’s an addiction until you’ve tried to give it up. Let me know how it goes.”

I am not thrilled with what the Doctor does being described as an addiction, because that seems like a cop-out. Sure, it’s an obsession, it’s what the Doctor does to run from everything else. We’ve never really learnt what’s driving the Doctor, but to describe it as an addiction does not seem to do it justice; because I think there’s a lot more history and convoluted emotions in there by now. Guilt. Duty. Not knowing what else to do. Loneliness. Sure, those are all feelings that have driven people into addictions; and I’m not trying to say that addictive states are something to be dismissed. Sherlock describes John as “addicted to a certain lifestyle,” but John Watson is not a 2,000-year-old alien with a radically different consciousness. This is where describing and narrating Science Fiction in human language reaches its limits, I think.

As much as I don’t like that the Doctor is being let off the hook this easily and this soon, this episode was an excellent exploration of character, his mental state, and of companions dealing with this. Well, up to a point. I mean, Perkins declines travelling with him because he’s seen what he saw, and he… doesn’t want to be changed like that. Like Clara has been. Hello.

And then Clara just… “a wobble”?! That wasn’t just a wobble, that was a big fucking deal. And now, Clara lies to the Doctor, telling him that Danny’s fine with her continuing to travel on the TARDIS, and I just… what?! It’s one thing for Clara to forgive the Doctor in time, but this?? No, it’s not on. We go through this entire spiel of Clara being sad, but firm in her decision to leave, which is an adult decision that not a lot of companions get to make on Doctor Who. Lying to the Doctor, lying to Danny, throwing the promise that she made to him under the bus in the process. As though, suddenly, the metaphor of addiction and fix made it alright for Clara to not want to give this up. What?? For Christ’s sake, can’t these writers, for once, pull an emotional arc through to its logical (from a narrative standpoint) conclusion? This was creating drama for drama’s sake, and then retconning the audience’s emotions within one episode. If she’d said, look, I don’t know if I can do this, convince me, then I’d have been fine with that. But I hate being manipulated this obviously.

I’m happy at how happy he is, but… hang on. He could hear, couldn’t he? He knows she’s lying, doesn’t he? And yet, he takes what he can get, even if it is on borrowed time. That’s not healthy, either.

I really liked Foxes and her cover version of Queen’s Don’t Stop Me Now, by the way. Much more sooting than the last time we had music on Akhaten. Granted, music here was part of the background, not part of the story, but I still found it a lot more soothing and à propos.

Next time on Doctor Who: Flatline.