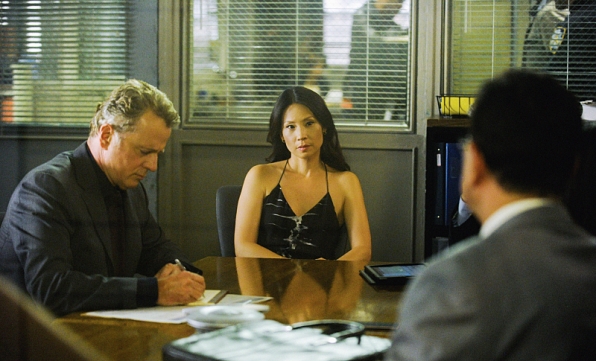 Things are about to get even more amazing when she reunites with Sherlock for the first time in those six months since he took the job offer with MI-6, and things are, to say the least… incendiary.

Because Sherlock’s been bloody well fired from MI-6 for… well, doing what he does, and now he’s back in New York, wanting to get back to consulting with the police. Captain Gregson won’t hear of it, however, unless Watson gives her permission.

Gregson: “Watch your back, ok?”

After the key witness to the trial is murdered on her way, it’s another two months before Sherlock turns up on her doorstep (figuratively speaking), a new protégée in tow — a young woman named Kitty. The thing is, things haven’t been as well between them as Joan had hoped when she made the announcement that she was moving out. She didn’t want to leave Sherlock, she just wanted a place of her own. She realised their arrangement wasn’t entirely healthy for either of them anymore; but it was never her intention to sour things between them. She wanted to remain his friend — and then, things happened with Mycroft and MI-6 and Sherlock took it hard, and now she pretends she doesn’t care he’s back. It stings that he’s got a new apprentice, despite her protestations. I mean, yes, Joan doesn’t need training anymore, she’s a detective. But she misses that friendship, their closeness, and she knows — they both know — that they could be amazing partners, training apprentices together.

Apparently, he left her a note, eight months ago, with only five sentences. One of them telling her that she doesn’t need him anymore — which may have been true, but Joan never meant it like that. And that note, well, to her it only spelt out Sherlock’s hurt rejection of her; when the idiot was probably only trying to make it easier for her, for the both of them; just as he didn’t go and join MI-6 to spite her, but to help make things with Mycroft right. It’s such a classic case of miscommunication — they never meant to say that they didn’t need each other, never meant to say they meant nothing to each other. But they were so afraid of losing one another that they jumped to conclusions — and now here we are.

You can see how much Joan’s refusal to work with him hurts Sherlock. He must have been missing her so bad, and seeing her for the first time in months is a punch in the gut like nothing else. Jonny Lee Miller brings all of Sherlock’s coping mechanisms, his carefully contained physical expression of emotional pain right back as if there’d never been a hiatus at all. With everyone else, Sherlock is contained simply because that’s who he is, but with Watson, he’s contained because he knows that nothing he can physically or verbally express will live up to how much she means to him. Remember that thing where he stormed in after her abduction and then just stood, looking her over but not daring to breach her personal space? That look in his eyes… it’s here now, too.

“I realised that it wasn’t you I was afraid of losing, not really, it was our relationship. The mechanics of it, the give and the take. And so I realised, I could do it again.”

None of that is helping convince Joan to work with you again, Sherlock, because you’re still lying to yourself. Sure, focusing on a new apprentice helped him get through it, and Joan is clearly proud of him for realising that much about himself, for acknowledging that teaching is something he can do, and taking delight in it and using it to heal himself; finding something a lot more stable than drugs to do it. But by reducing Joan’s role in his life to that of an expendable force… it’s not true. And it’s not helping Joan open up to him again.

“I’m glad that you’ve figured so many things out, I am. But I’ve got a lot of work to do.”

And now, Elana has explicitly threatened Joan — she’d been banking on her being in that elevator with the witness, it’s why one of the bullets missed by a mile. It was meant for Watson. Which, crap, is damn scary, but Joan doesn’t let it deter her. She solves the case. Sherlock figured out how the victims were killed — but Joan figures out how to nail the culprit.

The competition between Joan and Kitty is there at the beginning, but it’s also not. The thing is, Sherlock is deluding himself — yes, taking on a new apprentice was a good idea. But he’s still expecting her to be Joan, and she can’t be. Kitty says it herself, he never shut up about Watson even after he recruited her. He’s measuring her against Watson, and he’s a jerk to her in a way he’s never been to Joan, and that’s saying something. He’s disappointed in her, her grumbles at her, and he demands her to do as she’s told — which, he’s conveniently forgetting, Joan never really did either, despite what he’s telling Kitty now.

Kitty’s got her own set of skills, motivations, and morals; and although she and Joan come from different backgrounds and have very different personalities, they’ve got one thing in common: it’s not throwing something away. It’s moving towards something. Sherlock opened a new life to Joan, and she’s not about to deny Kitty that opportunity. Joan is at odds with Kitty because being replaced hurts, no matter how grown-up you are about it; and because she missed Sherlock, too, and it’s now clear as day that even if they get past their quarrels, things will never be as they once were. I’m actually certain that they’ll be better, but when a  relationship like that has to heal, all you want at first is to go back to the way it was, to something you recognise. Building something new is hard and painful and it’s scary, but if there’s any logic to this universe, Joan and Sherlock will find their way back to each other someday.

And Sherlock’s so happy when Joan tells him she’s fine with him working with the NYPD again. They’re still not partners (yet), but she’s there if he needs a fresh pair of eyes, and that delighted smile on his face is the cutest thing ever, because he’s still that excited puppy around her.

He knew he’d always find her here. So he came back.

I also love that Joan having a boyfriend just… happens on the side. It’s no big deal, she met him as he was looking for a lizard, she liked him, they started dating, they meet up when they’ve got time, end of story. There’s no drawn out plotline, no time being wasted on it. It just happens, because it just happens to be a part of her life, but it doesn’t suddenly change her life now that she’s not single anymore. You know, Sherlock always placed such huge meaning on romance by hating it so much and dismissing it so vocally — perhaps simply because he doesn’t understand it. But Joan doesn’t suddenly do her stuff differently because she’s got a boyfriend, it’s no defining moment in her life. It just is. I love it.

Next on Elementary: The Five Orange Pipz.