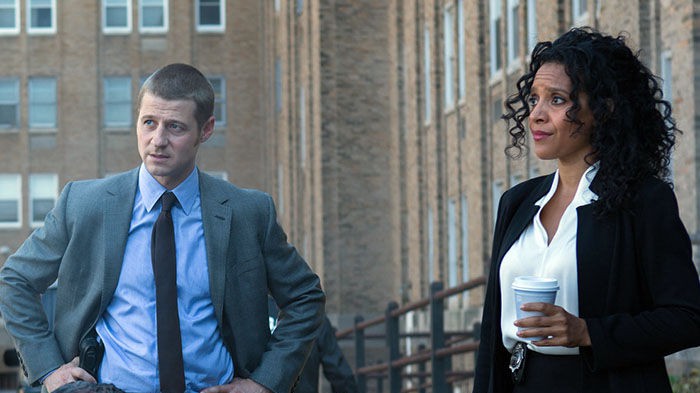 Previously on Gotham: The Balloonman.

For once, a visit to Wayne Manor has actual plot purposes — if only to show that when a detective puts himself in the hands of a twelve-year-old boy, it’s Arya Stark 2.0, budding Gotham vigilante style. So when Bruce has a nightmare about his parents’ murder, we know how much of a bad idea this is going to end up being.

Meanwhile, Ben Mackenzie is still stuck in his my-voice-is-too-deep-and-my-face-is-too-serious-for-this-simple-conversation schtick, whilst the dialogue between the partners is still stuck in useless infodump. We’re catching a glimpse of bickering in this one, but it’s short-lived.

Barbara’s past and Gordon’s hypocrisy

Except for when Barbara tells Gordon about her past relationship with Montoya — right after letting him know that it’s pissing her off that he’s keeping secrets from her. And then, lo and behold, he gets angry and shouty when he finds out that she’s lied to him about… about what, exactly? About a former partner of hers. Let me ask you, do you think they exchanged dossiers on their own sexual histories? Did Gordon ever ask her whether she has any ties to Gotham, whether she knows anyone? Were they ever under any mutual obligation to tell all about their past relationships? Something tells me, no, they weren’t.

In a relationship, each partner is entitled to secrets, to an extent — extent meaning, when something directly pertains to the present and the future of this partnership, all parties deserve to know about it. But one’s own personal history with something — or someone — might as well be off-limits. Keeping no secrets from one another about the past, ever, is Utopia. Sure, one can argue that since Gordon was bound to meet Montoya on the job, Barbara should have told him that they know each other. But then again, if Gordon is that poster boy for professionalism, he wouldn’t have let that cloud his judgement, would he? (Of course he would have, he’s an idiot and this is television.) At least Barbara is firm on the issue of her bisexuality, she won’t have it questioned or judged when they’re fighting — but then, it’s also one of the reasons why she didn’t tell him in the first place, or so she says (I’m sure that her past with drugs is more of a factor here). Didn’t she trust him with that? At least the abstracts of it? Was she really afraid he’d judge her or break up with her over that? If so, then that’s an already existent rip in the fabric of their relationship that doesn’t bode well. Especially when he announces that he won’t tell her stuff about work ever again — the trouble is, in their on-screen scenes together, all they talk about is his work, in either concrete or abstract terms. All Barbara seems here for is to encourage him and to tell him that he’ll solve Gotham’s problems because he’s the hero they’ve been waiting for. And now that that is taken away from her, by the narrative, of course all she can do is leave him — because the writers don’t know what else to do with her. Ugh. Does she even have a job??

In the face of Gordon’s silence, she leaves. Which really, really proves that she is nothing more than a plot device to the writers, who bothered to build her up as President of the Jim’s Gordon’s Valour and Honesty fan club, only to drop her now, after she’s been made suspicious of him by Montoya? You know, they want to make it look like she’s a character running under her own steam, but it’s just straw.

Plot, dialogue, and other things rotten in (and on) Gotham

Oh my god, did I just see Gordon grin? That’s something new in his repertoire of facial expressions.

And that is how easily Gordon loses his gun? Yeah, right. The combat scene with Gladwell is well choreographed, but against the backdrop of the light-flodded windows — and which parts of Gotham are that well-lit? If that scene does one thing, it showcases how the politicians of Gotham are really just fearful patsies, pawns in the games of the underworld. All that symbolic power… it does nothing. A leather briefcase will not protect you from assassins. What will protect you from the mob is to give Maroni are huge piece of Arkham, leaving the refurbishing of the facility under the purview of someone who doesn’t give a shit. And poor, twelve-year-old Bruce is left to ponder the injustice.

“Everything they worked for is now falling into the hands of criminals!”

God, stop it with the shitty, blandfaced dialogue already. A sentence like this works in a novel, not in a script.

And, oh no, Gordon told Bruce that perhaps he can help save Gotham. Oh good. Poor vigilante life choices intensifying.

Next on Gotham: Viper.