Previously on Doctor Who: The Witch’s Familiar.

In this two-parter opened by Toby Whithouse, we see a bit of a reset — this is, in essence, the first proper adventure after everything that’s happened. After Clara said goodbye for the first time, after Danny’s first death and then his second. Being abducted to Skaro doesn’t really count because, well, it wasn’t the Doctor that called, it was UNIT. So this is the first we see of Clara and the Doctor on the road again, wherever they went at the end of Last Christmas notwithstanding.

But that adventure can’t have been very adventurous, can it, if Clara’s complaining that she wants to save a planet every once in a while. The Doctor’s probably been taking her to far off planets with nice aliens, showing her the stars. Imagine that, just travelling with the Doctor, not getting into trouble. Question is: is he still running, or is he just clinging to the second chance the universe has given him to be with Clara?

The TARDIS, in the meantime, hates this place: hates it like she hated Jack at the end of Series 3, remember? He should have been dead but wasn’t, to her, he was basically a ghost, too. So when the Cloister Bell goes off, we know something really bad is happening — way worse than Belgium.

If the companion becomes the Doctor, then what happens to the show?

Clara, on the other hand, is totally psyched for saving planets and an awful lot of running — in short, she’s forgiven him for the Moon, forgiven him for the Orient Express. There are a lot of references in this episode to Clara becoming more and more like the Doctor, and there’s been an ongoing debate in fandom as to whether it meant that Clara had changed through trauma, or whether it had broken her. The flashcards are the first sign, really — Clara can’t be bothered to be the Doctor’s carer anymore, she doesn’t speak for him anymore when he’s being insensitive. One can either interpret this as her disconnecting — or, as I am more inclined to at this point, as her teaching the Doctor something. They’re his flashcards, not hers, and she’s making him say what’s on them, perhaps in the hope that, one day, he’ll get the point of caring.

(Thing is, he already does.)

Clara still connects with the people around her — but it’s at the end, with Bennett, connecting over their respective loss. Bennett was in love with O’Donnell, and she with him, but neither of them said anything until it was too late. (The way he just stood there and took it when she was geeking out about the TARDIS was cute.) Clara urges him to understand that there is a universe out there, a life, and that he’s got to live it, even if it seems impossible. That’s when Clara shows the compassion we’ve come to expect from her. During the earlier scenes, when the Doctor’s gone, Clara’s dejected and unable to comfort Cass and Lunn. Lunn asks her what it is she usually says to people so he can say it to her — a clear mark that Clara doesn’t have the energy to do the comforting herself. Not when the Doctor’s dead.

Later, when Clara has figured out how to get the phone back, she does what the Doctor would do. She sends Lunn out into the corridor, because the ghosts won’t harm him. When Cass glares at her, she says, “I know that look, I do that look!” Which means she only does this because the Doctor’s not there to do it. And rather than sit and wait and fail, she’s willing to make those decisions. Perhaps every companion does at some point, and many have raised suspicions as to what it does to you, travelling with the Doctor. Remember when Donna met Martha? She tells Ten, essentially, ‘So that’s what happens to the ones that don’t die. They become soldiers.’ The Doctor was not happy about that thought. And so it’s no coincidence that, here and now, it’s being made explicit again, with Cass asking whether it’s the Doctor’s influence, or whether Clara was always happy putting others’ lives at risk. But Clara doesn’t apologise, does not agonise over having to do this (perhaps internally), and she reacts to Cass’ angry reply with sarcasm. 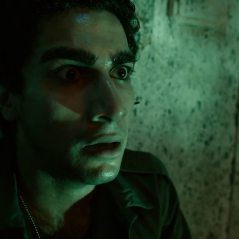 These episodes were strong on the supporting characters front, and the inclusion of Cass was brilliant. She’s deaf, second-in-command, first now that Cassius is dead, Lunn is always there to translate, and it’s not seen as an obstacle by anyone. She’s the leader, and that’s it. It’s little things, like O’Donnell turning her by the shoulders so she can read her lips when O’Donnell tells her that Lunn is alright — and it’s Clara looking at Lunn rather than Cass even though she’s technically speaking with her; that show that some actual thought went into this character and her story, and her relationships with everyone on the base.

The pacing was a bit off here and there, but the ghosts were properly scary, and splitting Doctor and companion up usually makes for good material, too. The great cast really only made this possible, though, because you have to really connect with them.

The Doctor’s duty of care

I’ll come back for you, I swear.

The Doctor is flippant about it — “can I stop now?” — but he’s serious, and he’s serious about saving Clara. What Bennett accuses him of, that he was only using O’Donnell to confirm his theory re: the list of names and is only now leaping into action because Clara is next — it’s true. He programmed the hologram to say it that way because that would give him the idea, because that would give him the courage to face the Fisher King, and possibly his own death. It’s very, very close to what Danny says Christmas Day: he saved Clara. The rest of the world just got lucky.

Not with me! Die with whoever comes after me. You do not leave me!

No, Doctor! I don’t care about your rules or your bloody survivor’s guilt. If you love me, in any way, you’ll come back!

And the Doctor does, so much. With others, the Doctor’s flippant or condescending or angry, but with Clara he slows down, he goes quiet, he lets his desperation show. Curls into the TARDIS console, hiding his face from Bennett and O’Donnell, frustrated and angry and frightened as he argues with Clara over the phone.

This isn’t about me, I’m a dead man walking. I’m changing history to save Clara.

It’s an insight into him that’s even clearer than it was in Series 8, and I think the writing’s better for it, and it works for the character. He’s not quite so inscrutable now, as alien as he still is.