Warning: this review includes spoilers for the plot of Firewatch as well as gameplay elements and screenshots!

Firewatch is one of the break-out game titles of early 2016, and very probably the entire year. I love playing story-based games, I love mysteries that let you discover worlds — Firewatch throws you right into the middle of stunning landscapes in Wyoming. In this, it echoes survival games, but it’s first and foremost a point & click adventure with a story designed to lead you through many different terrains closer to the core of a fantastic, personal, heartbreaking story.

In Firewatch, you play to survive,

but you do it without the 24/7 threat of starving to death in the cold.

The game immediately makes you part of the story — by giving you a prologue, and giving you time to discover and shape who your character is going to be within it. Your response isn’t on a timer, and you have time to consider. What kind of husband is your Henry going to be? How is he going to handle his wife, Julia, being diagnosed with Alzheimer’s at 41 years old? It’s a tiny bit different from other story-based games that throw you right into the main action before you know who you are, like the Telltale titles. (I’ve played most of them, and I love it. But I loved this about Firewatch, too.)

You build your character, and just as you’re really, really sad about Julia and Bucket, you end up in Wyoming.

Henry and Delilah — BFFs 4ever

The story starts off pretty relaxing — you meet Delilah, your boss, via the walkie talkie in your watchtower, and your first interactions with her will set the tone for what’s to come. Delilah is your only human contact throughout this story, which adds to the feeling of isolation and helplessness once the really creepy shit starts. ’cause, thing is — can you trust Delilah? I’m still not entirely sure.

She talks to someone else at one point, unaware that you’re listening in. You can either call her on it or stay quiet. In my playthrough, I stayed quiet, so I don’t know what she would have said. But she talks about something that Henry doesn’t know and that she doesn’t want to tell him, so… I’m not sure about her; and I want to play through it again to make a different choice that time, see what happens. Still, their banter is genuinely enjoyable and funny, the sarcasm is off the charts and yet never rings shallow or over the top. Delilah is wonderfully caustic and I love how much she enjoys taking the mickey out of us. The relationship between her and Henry evolves even to the point of something of a silver lining (although I guess that would be more promising if the game were over after the night watching the fire in the night). You can make Henry give as good as he gets, or you can play him a little more tight-lipped, but where’s the fun in that? The two open up to each other across miles and miles of rock and forest, and it feels very real and human. He calls her ‘D’ pretty soon, which is just such an organic and smart way of conveying their closeness with, well, one letter. 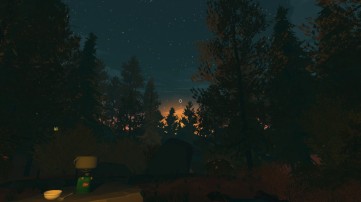 Once the phone lines are down and you’re cut off from everything, the tension really starts picking up; and once I got to Wapiti Station, I was (quietly) terrified for Henry.

There’s no combat in this game, not even one quick-time event; and it’s not a horror game, so there are no jumpscares. The only thing you have to do quickly is decide what to reply to Delilah, and that, well, that makes complete sense. (And if you’re really not sure, you can still punch up the pause menu and think for a bit. But chances are you’ll just go with your gut.) And yet, the atmosphere is so intense, the sense of danger so real… precisely because you never see who’s doing this to you. You’re alone, in the wilderness, and someone is willing to kill you to keep a secret.

Firewatch builds that atmosphere so well, through nothing but sound and the power of imagination. The final day, which is when you know the entire terrain already, you get the added difficulty of poor visibility due to the smoke and strong wind, which makes it all the harder to actually find your way North to the evacuation point, which is a nice touch. Otherwise, it’d be too easy. Even though you now know what’s going on, you still have to fight your way through.

If, like me, you had a bad feeling about Brian Goodwin’s abandoned backpack right from the start, that hunch will pay off in the worst moment of the game: finding his body down in the cave. You’ve been using his ropes, his pitons, his camera; you found his totally cute, nerdy hideout, complete with a dragon’s fortress. And now you’re stepping over his bones. This game doesn’t pull any damn punches. 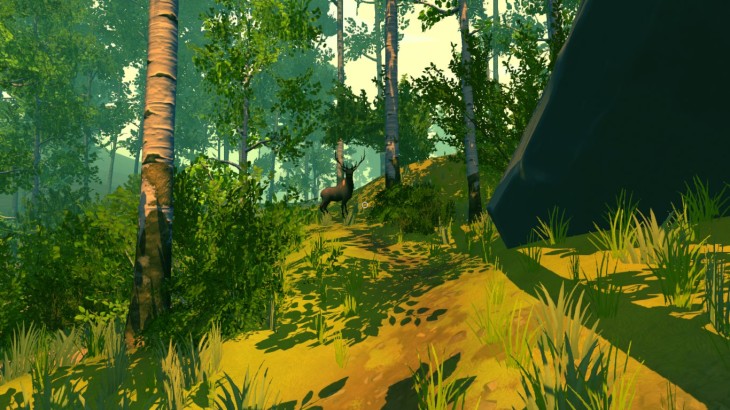 It’s also really pretty: the graphics are fantastic, and even though the laptop I use for Steam gaming is really old (it struggled with the medium settings), the game still looked gorgeous on a bigger screen. Controller support is smooth, and getting around with map and compass is easy enough, even for someone as directionally challenged as I am.

Firewatch gave me 7 hours of gameplay that were funny, intense, heart-stoppingly tense story-building that never broke immersion. Nothing out of place, and the characters were just lovely. They completely drew me in, even if I never saw their faces. (Well, except for Henry’s surprise selfie in the credits!)

There are a couple questions I’ll enjoy making up my own answers to: 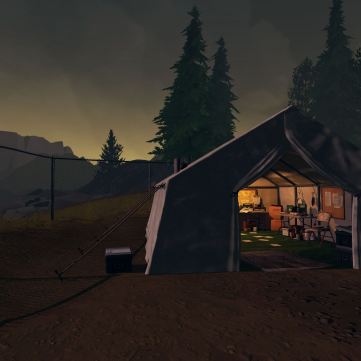 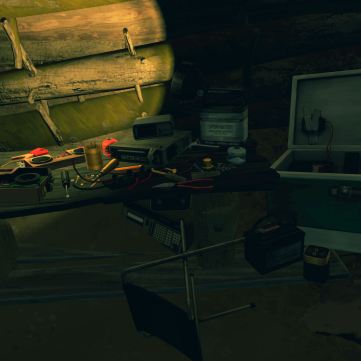 Screenshots were taken by me, in-game. (One more cool thing: once you’ve completed the game, you can upload the photos you took to the game’s website. They’ll email you a link, and from there, you can order actual prints of your shots. Free shipping to just about anywhere, $15 for the photos. Development might take a while.)