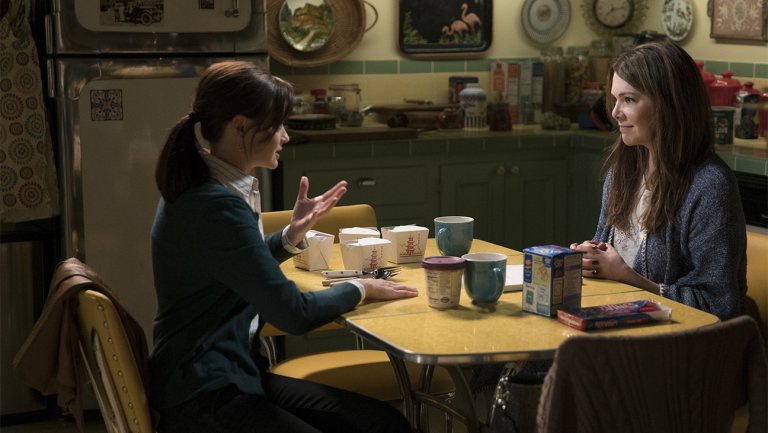 This is the grand finale — except there’s nothing grand about it, because it’s been weeks, and I’m still sitting here, gaping at the sheer amount of fuckery that’s going on.

For all you busy bees, here’s the tl;dr version of my review in video format:

When writers want an outcome (whether we as an audience agree with that outcome or not), and they force it by having characters act OOC, or by making them make questionable and out-of-whack decisions… that’s called bad writing. And it’s called lazy.

I may not like Logan, and I may not think that he’s The One for Rory, but I have to keep that separate from the way Logan is being set up as the patsy, here.

There is a fateful — and hateful, and repulsive — lesson about the circle of life in this episode. Lorelai even says it out loud, but where her and Emily’s circle is wistful and actually works to mend some of the rift between them, Rory’s is utter… bullshit.

Logan is Chris, Paul is Max, and Jess is Luke

Logan stans are mad because they think they’re being betrayed and their OTP ripped apart — the tearful goodbye at the B&B goes to great lengths to sell Logan/Rory as the star-crossed romance Lorelai and Chris once were. They never could quite quit each other, to the point of marrying in Season 7. But where they were just clearly not right for each other, Logan fans feel like they’re being given the short end of the stick; whereas Jess stans feel like they’re being force-fed Logan and Rory’s romance precisely because of that trope, which… is really frickin tragic.

“Are you really marrying Odette?”

Ok, so Logan is marrying Odette because it’s expected of him, because his parents practically chose the right girl for their son (because Rory was never good enough). Where is Logan’s backbone? Where is his willingness to fight? He fought his parents when he was a kid, but now he doesn’t have the guts anymore? Why won’t he at least confess his true feelings to Rory, and see where that leads?

Sure, he’s been burnt before — she rejected his proposal once, but come on. It’s obvious that this is killing him, and Rory, too. The Palladinos are determined to ignore Season 7 and any of its growth, aren’t they? Because this is Season 6!Rory and Season 6!Logan. And at 32, that’s not a good look.

If you can’t hack it as a journalist, don’t worry, you can always just have a baby with the wrong man!

If Logan is Chris, then babies are destiny on this show.

And not just that, but they wanted to end Season 7 this way, when Rory was 22 years old. They wanted to take away her chance at a career and force her into motherhood when she was JUST finally getting OUT of Stars Hollow. And now, it’s pulling her back in. Young adult Rory was often conflicted between her duties at Yale and her sense of being tied to Stars Hollow, but that… has to end! Stars Hollow is like this sacrificial altar for girls’ hopes and dreams. Rory decides that journalism “didn’t work out for her,” after… a successful career of ten years?? That is something you say when you try something for a year and discover it’s not your thing after all, not after working at it for a decade. It would have made complete sense, and it would have been an interesting story if Rory had been working as a journalist for a long time and then decided that she wanted to try something different. That would have been cool. That would have shown growth, and that you can pursue different dreams at any stage in your life. That’s a totally valid storyline. But framing this as failure… it’s stupid. It’s preposterous. It’s lazy.

Paris is saddled with kids she loves but who prefer the nanny to her, and Lane is… just sort of there, spending her days as mom to twins and a husband who hates his job and balks at being promoted. Promotion! Very horror, much corporate sell-out! Gilmore Girls continues to punish women for having sex. It’s so, so gross.

Being accidentally pregnant at 32 is one thing, but at 22? This is the writing on the wall, and it’s an equation of doom that spells out one thing:

And I don’t understand it. Why would they do this? This is the grand plan that we didn’t get in Season 7? Oh my goodness, had they actually ended the original show that way, I would have hated that so much; and I do hate this now. And all these questions Rory was asking Chris… she is considering raising that child on her own. And I swear to God, if she pulls an Anna Nardini and never even tells Logan that she’s having a baby… I mean, I hope that Luke would try to talk her out of that, seeing what never knowing about April did to him (and, by extension, to Lorelai)… I just… this is sickening.

And what if Rory is considering not telling Logan to protect his legacy? Then I am actually going to throw up, parcel that vomit, and send it to the Palladinos. Because then I’ve HAD IT.

When Rory rejected Logan’s proposal in Season 7, we all thought that that also meant that she’s rejecting money; seeing as that was always part of the point of contention between her and Lorelai when it came to Logan. He presented that life that Lorelai left behind, he represented money and never having to worry about it.

At 32, Rory is comfortably living in it, either via her own trust fund, I presume, or by enjoying Logan’s privileges when she’s in London. The fact that he has to call her attention to the bottle of wine that he sprung for at the restaurant in Spring — she did obviously not balk at the $300 bottle of wine.

And then, when the Life and Death Brigade kidnaps her for the night — at the club, Colin exclaims, “Money is great!”

Yes, because you have it, Colin. Chris, too, calls attention to the money he has now several times. First, to enquire about Lorelai and Luke being registered for wedding gifts, and then to ask Rory if she needs any financial support. Remember when Chris first came to Stars Hollow in Season 1 and his credit card was declined because he was broke? Yeah. So, years on, he caved, working for his father’s company, and he’s swimming in the money that he rejected when he tried to emulate Lorelai and reject his parents, too. (Now, Logan seems to be lacking that strength, too. And that sucks, because Logan isn’t a scared 16-year-old.)

When Rory tells Lorelai that she’s pregnant, the expression on Lor’s face isn’t delight. It’s shock, and not the happy kind. You know, I think the whole fandom would have preferred Rory to be single at this point, at least rather than pregnant by a man who won’t fight for her. Or, you know, she could’ve been happy with someone, and the pregnancy could have been a happy surprise. Or she could have been with Paris! God, couldn’t she have ended up with Paris? That would have made sense.

Is this an invitation for Logan to get his shit together? Or is Rory going to do this alone, with Jess waiting in the wings, obviously still pining for her? Are the Danes/Mariano men doomed to raise kids that aren’t their own, loving them as if they were? (And, if Jess is still so in love with her, is he, too, doomed to repeat Luke’s mistakes of never just opening his damn mouth and confessing his feelings? That poor sod.)

A lot of the decisions characters are making here would have made some semblance of sense for 22-year-olds. But the writers have ported Season 8 ten years into the future without accounting for any growth that could have possibly occurred in the meantime, and ignoring any growth that happened in the Season 7 that happened without them. You know, I used to think that, oh good, now we’re getting the final season that we should have had, one that doesn’t suck. Instead, we got this. And I hate it.

And some spiteful part of me wishes that Lorelai hadn’t given Rory permission to continue the book, after the way Rory went about telling her in the summer. I know that it’s necessary to wrap everything up in a bow and to smooth over the conflict, but Rory hasn’t earned this.

I am so fired up about this, I can’t even get excited at Sookie being back.

Luke and Lorelai are happy, and that is the only good part about this revival

See, Luke will fight for Lorelai. There are still some lines in what he says that smack dangerously of gas lighting — “there is no-one who will be more there for you than me,” for instance; but overall, his speech was good. Jess getting him to open up about his fears that Lorelai might be leaving him, is good.

(Rory asking Chris not to show up for the wedding is a stupid rehash of the Season 5 plot I detailed in an earlier review; and it, too, is part of the whole circle of life bullshit. If Rory just can’t quit her college boyfriend, then what — is she afraid Lorelai will see Chris and leave Luke standing at the altar?!! Again, ten years ago, I’d have sort of understood that request, since that would have been about 18 months after Chris and Lorelai’s Season 7 divorce was finalised. But now??)

Lorelai calling Emily from that hill… that is the one time watching this whole revival that I actually cried. I’ve been rewatching the show from the beginning this winter, and it’s been hurting me differently than in the years before. My own relationship with my father has changed in the past few years, has changed a lot, into something very complicated and laden with baggage and things unsaid. So Lorelai remembering that afternoon with her dad hit me right in the feels. Because I remember such times (and for me, there are more of them and the memories come more readily, and in that I am lucky), but while my father is still alive and well, I feel like Lorelai at the beginning of Season 1. He’s still here, but I just don’t know how to get back to that relationship, and part of me also doesn’t want to. But then, I also know that he won’t be around forever, and I dread to think what kind of regret I’ll be feeling if we don’t repair this rift — or at least try to.

And Emily… Emily is happy at Lorelai relaying that memory to her, and she’s happy in Nantucket. She owns that house now, and she’s got a job, of sorts — guide at the whaling museum.

Oh, man. If you need me, I’m gonna be busy repressing that this revival ever happened, and the realistic part of me wants Netflix NOT to do another mini-series, while the masochistic part of me wants to know what fresh hell is awaiting Rory and what the FUCKING HELL their original plan was. Ugh.

See you next week, for the Doctor Who Christmas Special.