Oh, I have missed this. So, so much. I found some of Moffat’s Christmas Specials a little bumpy, but I really had fun watching this. The story was well-paced enough, the nefarious plan was engaging rather than entirely foreseeable, and the script combined fun and suspense as well as a few wistful moments following on the heels of the previous episode, The Husbands of River Song.

The genre mix of this Special includes superhero origin story, alien invasion plot, and a rather generous dose of rom-com. The latter part has rather a little too much potential for creepiness, which is, sadly, a bit of a staple in Moffat’s love interests. But I’ll go into more detail in a moment.

We find the Doctor hanging upside down in front of little Grant’s window, and it’s Christmas. He’s a very respectful child, and his mother seems content to tell him to let the old guy outside his window in — apparently believing that he thinks he’s seeing Santa. Hence the milk and cookies.

The Doctor needs a little help with something, having set a trap for… someone up on the roof, and Grant is, of course, curious. He’s also a fan of superheroes, and the Doctor finds one of his Superman comics and immediately deduces that Clark Kent is Kal-El — Grant doesn’t see it. It’s a cute little meta joke, and it also establishes that this isn’t set in a universe in which superheroes already exist (which… would have been funky, but also slightly complicated), but one in which they’re merely fiction. It also explains how Grant ends up with the powers (and the glasses) that he does, Superman is apparently his favourite. So the Ghost is coded as a Superman equivalent, right down to his innate goodness. There’s no darkness about him as there is about Bruce Wayne, he doesn’t grapple with his double identity the way the Bat does, even though Lucy makes a crack about the Bat signal coming in an app now. And Harmony Shoal has a globe on top of it, and everything. The CEO, Mr Brock, could even be seen as Lex Luthor. Tomiwa Edun should have had more screen time, but I loved seeing him as one of the villains of the piece, even if both his and Aleksandar Jovanovic’s roles were a little… bland, overall.

But it’s not a signal, not in that sense. It’s the baby monitor the Ghost carries around with him because, guess what. He’s Grant, and Grant is Lucy’s nanny. And he’s known and pined for her for 24 years.

HE’S HER NANNY. GRANT, ARE YOU STUPID?!

I don’t quite know what to think about that discovery. Sure, they met again in college, and Lucy ended up marrying his best friend, who has since left her for someone else, the cad. While watching, I thought, Well, I suppose it depends on how he got the job. Answered: he offered to help out after her husband ran off. What I don’t understand: if his ex-husband was his best friend, why does he call her Mrs Lombard? If he were a friend of the family offering to help out after the separation, then it wouldn’t be quite so shady, but this… it’s weird.

And the pining for 24 years thing… not even Clark Kent is quite that much of a doormat. (In most comics.)

For a long time, the dynamic is similar, though. Lucy is the investigative reporter who takes risks and writes the big exposés, and she tells Grant not to “worry his pretty little head” about things.
His asking whether she met someone could easily be interpreted as jealousy — except of course we know that he just wants to know if meeting the Ghost impressed her. There’s always that fear of Lois/Lucy only falling for the hero, not the man, and the man behind the mask losing her to the legend. But that’s not the person Lucy is.

I LOVE how she grills the Doctor. Her interrogation technique is creative — and putting it to people that (single) mothers don’t suddenly lose their bite and their grit. She figures the Doctor out in a way that’s really cleverly written, too. He doesn’t make an obvious blunder, his dialogue isn’t purposefully stupid — Lucy just actually pays attention, and twists his words against him. She realises that he’s not used to being spoken to like that, and in truth, people rarely do.

Ooh, the boy is not straight.

“Lucy is your favourite.”
“Who says?”

A slight case of levitation, Grant.

The Doctor, at least, calls Grant out on not being honest with Lucy about his feelings, which results in a very amusing split screen situation, with the Doctor making very confused faces whilst Grant, as the Ghost, calls Lucy to arrange an interview.

“I bet you get a lot of stares, dressed like that.”
“Right back at ya.”

During the interview, Lucy ends up realising a few things: she has feelings for Grant, which come to the fore after asking the Ghost whether he’s got a girlfriend — or a boyfriend, since, y’know, there’ve been rumours. She takes his reaction as a “no homo,” which prompts her to tell him that “guys like him” often end up making fun of men who work as child caretakers. She’s not very fond of the Ghost in that moment, but that’s not the point. The point is that she’s not been seeing what was right in front of her eyes the whole time.

Doing what he does, Grant is a hero in his own right, powers or no powers. And Grant would, I suspect, rather alienate Lucy from the Ghost in this moment than lose her to… himself.

And it’s not the Ghost stopping that bomb, it’s Grant. Because it’s the man behind the mask who reveals the courage to end this standoff. And Lucy finally realises that; and she prefers Grant better, anyway. The Ghost.. is just a bonus.

“What do the rich old men always do when the fighting starts? They’ll find the safest place to hide themselves away and send all their young people to die.” 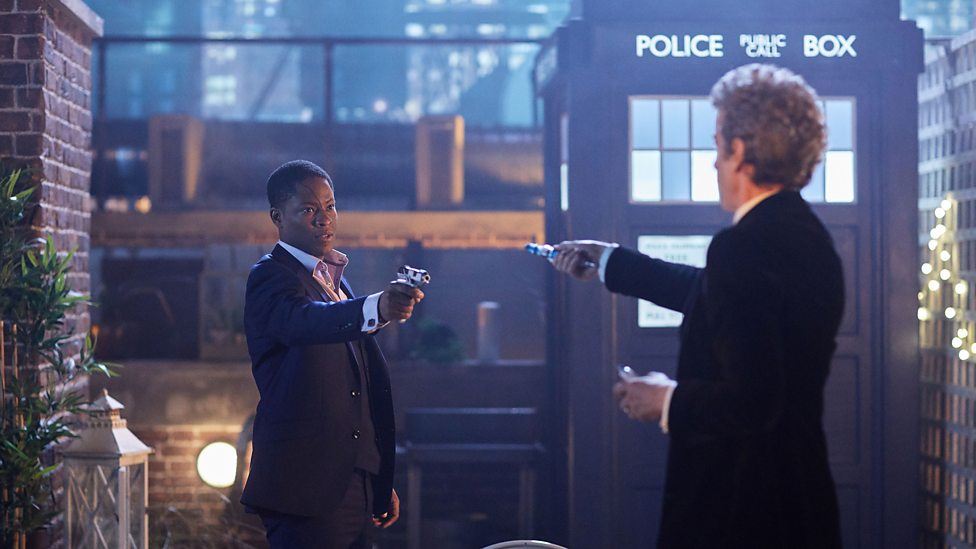 “You are completely out of your mind!”
“How is that news to anyone?!”

The Doctor isn’t the main hero in this story, he’s mostly just along for the ride as Grant saves the day. Sure, the Doctor figures out what to do, but he lacks the actual might to save the bomb.

At the end, Grant’s powers don’t consume him. He uses them for good, and that’s it; and he’s got no trouble giving up the Ghost to be with Lucy and take care of Jennifer. The Doctor promises that, should anything world-threatening happen, he’ll be there. He just wants them to be happy.

And they worry about him, too — I like that he’s got friends again now, a family to pop in on for dinner every couple of years. They’ll do him good. Coming fresh off losing River and not being able to remember Clara, the Doctor is surrounding himself with people. He took Nardole along because he feared being lonely, and I love that Nardole actually fills Lucy and Grant in on the story of River Song — at least the tail end of it. It speaks to their compassion that both Grant and Lucy press the Doctor on whether he’s doing alright, repeatedly, and I love them for it.

Given time, he will be.

Series 10 is looking really good, guys! I’m so looking forward to meeting Bill when the show comes back around Easter weekend. We’re even giving a tease that these particular wandering brains (that we also saw in The Husbands of River Song) will return, since one of them has taken over one of the UNIT soldiers. Oh shit. UNIT soldiers. NOT GOOD. Osgood will have her hands full.