So here we are, back for some proper Sci-Fi after a long, long time of living the slow path. I was skeptical after Series 9, but: I really liked it? I think it’s gonna be a good final series for Peter Capaldi? And Bill — oh, Bill. She’s the best.

In a series opener where the alien plot is a little bit forgettable because we only see it/them manifested in the shape of a human woman that is murdered and made into The Pilot, the focus is firmly on the Doctor and Bill.

Time Lord Out of Order

The Doctor’s fallout from Series 9 seems, at first, comparatively minimal. He definitely seems to be coping better than most of his other selves have — on a scale from 0 to Series 4 Specials/Time Lord Victorious, Twelve is definitely a solid Could Be Worse. 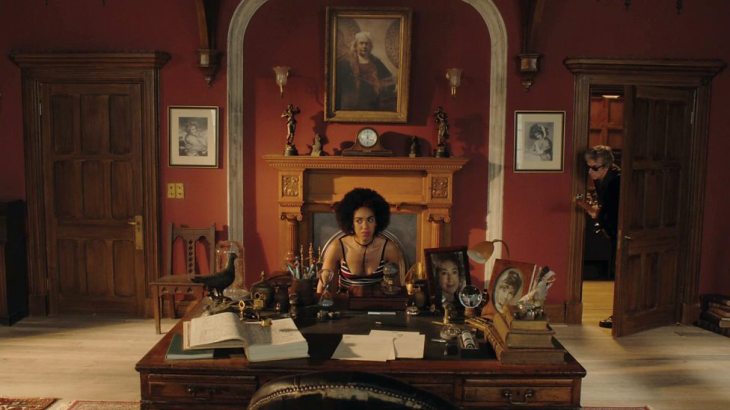 The only sting of pain comes when Bill pleads with him to let her keep her memories just for one night, and then acquiesces but tells him, “just imagine what it would feel like if someone did that to you.” And that’s when just a few notes of Clara’s theme plays, and we’re reminded that he knows what that feels like. Because he and Clara loved each other so much, and he wanted her to be safe, to live, and she wanted to die knowing who she was, who he was, and what he meant to her. In the end, she got her cake and got to eat it, too, travelling with Ashildr and making sure, in turn, that the Doctor would be safe. And he remembers everything they did, he even remembers her name, he just doesn’t remember her. He knows what it feels like to have part of himself missing, and that’s when he gets it through his skull that he can’t just do that.

It’s also a moment wherein Pearl is absolutely brilliant, because she goes from happy and excited to suspicious to afraid to angry (“I know what a mind wipe looks like!!” — her face) to pleading to sadly resigned and subtly condemning in what, under half a minute, and she just hits the nail on the head, unerringly. Each note was perfect.

It explains, though, why he didn’t call for Bill when he and Nardole hear a noise down by the Vault. He asks Nardole how he programmed the security settings, and Nardole answers, “friends only.” Which is lovely shorthand for confirming that the Doctor cares for Bill and that she’s a good person, assuming that the security settings are linked to the TARDIS mainframe. But the Doctor doesn’t want anyone else involved, doesn’t want anyone else to be put in danger, and he even stops travelling. He’s on his own, which he’s handling reasonably well, considering that he recently found Gallifrey and became, well, its boss. It’s not until the TARDIS gives him a good talking-to that he agrees to take a few nights a week off from being a professor to show Bill the universe.

We know that Peter Capaldi will leave the show after the Christmas Special, nevertheless I was surprised that they put a shot of him regenerating into the series preview. Either it’s a red herring and that’s not how it happens (another meta regeneration, or perhaps he’s hurt and manages not to die, but uses the regeneration energy to do something clever?); or they’re being uncharacteristically not-cagey about stuff.

A New Series, a New Companion

Pearl Mackie is a gift. She genuinely blew me away with the work that she did in this episode (her very first on a new show, on the show, which is amazing), working every nuance she could out of the script and the dialogue, and with how she’s just so expressive. I desperately want to know more about her life and her experiences, and not because she herself is at the centre of some strange cosmic mystery or anything; but I just want to know her. What was her childhood like, growing up with an obviously absent-minded if not completely absent foster(?) parent/family; what are her dreams; where does she come from and where is she going? What are her reactions going to be to the things she’ll stumble into alongside the Doctor, how is she going to change and grow? I NEED TO KNOW.

Also, I’m just saying, telling the Doctor he runs like a penguin with its arse on fire is beyond even Donna levels of cheek. God, I love her.

I also loved how the costume and make-up department used the extended exposition to help us get to know her through her clothes and her (natural!) hair styles. It’s a luxury we’re not often afforded on Who, because usually the companion gets one outfit per episode, plus a poncho and a spacesuit, if they’re lucky. And obviously, showing a couple months in quick narrating time to help things along isn’t a trick the show can use with every companion, but here it fit the intro into the Doctor’s new, more… stationary lifestyle perfectly and it helped introduce Bill so well. Getting a sense of how someone dresses is a huge help in getting to know them, and it really helped round it off. (I just love costume departments, man.)

I’m mentioning it last — but not least — because, as Cosima Neuhaus one said, her sexuality is not the most interesting thing about her, but: Bill’s a lesbian, and everyone who doesn’t like it can go live with the lizard people.

You’ve got to keep your eye on men!
Men aren’t where I keep my eye, actually.

Sadly, this episode’s storyline with Heather does feed into the Tragic Gays trope: the Heather that Bill knew is definitely dead, the Doctor said that promising not to leave without Bill was “her last conscious thought.” So she’s gone, and there’s no telling whether the… whatever it was that actually took her (was it/its home planet/its civilisation ever named? I wasn’t paying attention, if it was) will continue to use her form or not, and whether she in some way will continue to exist that way. 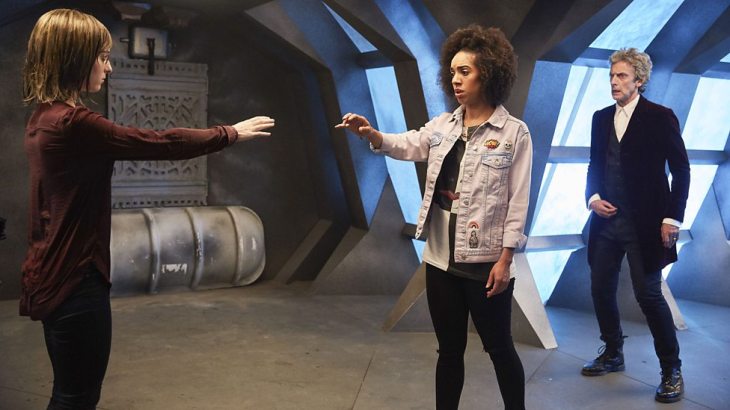 Nevertheless, their relationship, tentative as it was, wasn’t played for laughs and it wasn’t dismissed. Instead, the scene where Bill and Heather say goodbye was very moving albeit a little rushed and still set in the middle of a Dalek facility, which was kind of distracting. I don’t know, I feel it would have served the scene better if the Doctor had thought of a way to trap her, rather than try to murder by Dalek ray gun. That way, there could have been a conversation without the impending threat of extermination and just less distraction / Daleks for the sake of Daleks.